I analyze and write about the Minnesota Twins. My perspective has been developed from my lifelong fandom of the Twins, collegiate playing days as a pitcher, and graduate education in business and analytics. My goal is to use my experience in baseball and familiarity with its numbers and data to explain, inform, and educate about the events happening on and off the field. 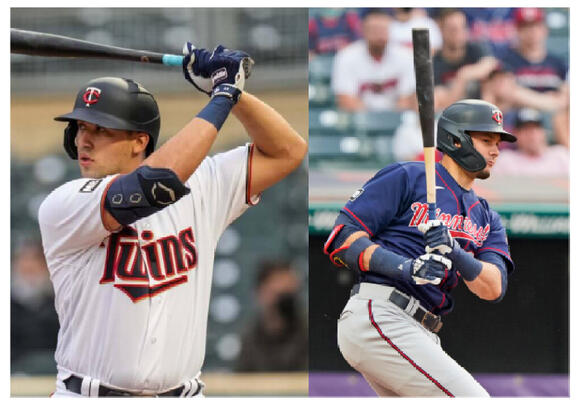 With the Minnesota Twins quickly running out of time to turn around a season that has seen their playoff prospects fade significantly, the focus for the organization will begin to shift away from contending now to preparing to contend in the future. In the increasingly likely event the Twins decision makers decide to turn the page on 2021, a great deal of attention will be paid to the upcoming July 30 trade deadline when many of the Twins’ veteran players will be made available to other teams in trade offers for young prospects that might be able to help the team in future seasons.

In addition to the trading deadline, the team will likely increase the playing time given to young players to give them a valuable development opportunity at the highest level. This will also give the Twins management an opportunity to evaluate them in the Major League environment.

A bright spot in that context is that the team is already getting a head start on evaluating two of their most highly regarded prospects. Thanks to a rash of injuries among Twins outfielders, corner outfielder/first baseman Alex Kirilloff (Minnesota’s #2 Prospect per MLB.com) and corner outfielder Trevor Larnach (#3 Prospect) are already nearly every day regulars in the Minnesota lineup. Not only are the two getting regular playing time, but through their first month or so of big league action, they are demonstrating that they belong.

Kirilloff, a 2016 first round pick out of a Pittsburgh area high school famously debuted during last season’s playoff series against Houston. This season, he served as the Twins’ 27th man for a doubleheader with Boston on April 14, giving him the rare distinction of being a player who took 7 MLB plate appearances before officially debuting on the Twins’ active roster. That debut would come on April 23. Now, Kirilloff has played in 30 games and split his time between the two corner outfield positions and first base. Altogether, through games played on June 9, he’s taken 117 plate appearances and provided a batting line (average / on base / slugging) of .255 / .291 / .436. By weighted on base average (wOBA), a comprehensive measure of offensive value, Kirilloff’s season long production checks in at .312, which is just a tick above the overall league average of .310. That is all the more impressive when you consider Kirilloff has also been playing through a nagging wrist injury that has limited his power and pulled down his overall numbers slightly.

Using that data, MLB has developed a suite of “expected” statistics -- expected batting average, expected slugging percentage, expected weighted on base average -- that estimate a player’s numbers based on their contact data.

Here are those estimated numbers compared to actual for both Kirilloff and Larnach:

In both cases, the quality of their contact more than supports their performance so far and, especially for Kirilloff, suggests they should have even better numbers.

As is often the case with rookie hitters who find success, opposing pitchers make adjustments to how they attack them. The primary way opponents are adjusting to Kirilloff and Larnach is by reducing how often they throw them fastballs. Kirilloff saw 47-48% fastballs in April and May. So far in June, that fraction has decreased to 34%. Larnach saw 51-52% fastballs in May and has seen only 40% fastballs in June.

There are good reasons for these adjustments. Both hitters have feasted on fastballs so far.

Kirilloff has hit .327, slugged .633, and delivered 9 of his 11 extra base hits off of fastballs. Against breaking balls, his average and slugging percentage are just .167 and all of his hits are singles.

For Larnach, the disparity is even more stark. He has batted .419, slugged .744, and produced all 8 of his extra base hits against fastballs. Against breaking balls and offspeed pitches, those numbers are .063 (both batting average and slugging) and .091 (both), respectively. More worrisome is that Larnach’s swing and miss rate (Whiff %) leaps from 19% against fastballs to 51% and 63% against breaking balls and offspeed pitches.

Both players are starting off from a wonderful place and finding early success. But, continued success is far from a guarantee. How well they adapt to the challenge of pitchers making adjustments in how they pitch them will dictate how successful they can be. For now, though, they've done nothing but show they belong.

I analyze and write about the Minnesota Twins. My perspective has been developed from my lifelong fandom of the Twins, collegiate playing days as a pitcher, and graduate education in business and analytics. My goal is to use my experience in baseball and familiarity with its numbers and data to explain, inform, and educate about the events happening on and off the field.

Minnesota Twins pitcher Jorge AlcalaTONY DEJAK, AP FILE. The last time the Minnesota Twins were out of contention at the July trade deadline was during the 2018 season. Then, the team traded right handed reliever Ryan Pressly to the Houston Astros for two minor league prospects -- one of whom was right handed pitcher Jorge Alcala. At the time of the trade, Alcala was ranked as the tenth-best prospect in the Astros’ highly regarded farm system by MLB Pipeline. Fast forward three seasons and Alcala is in his second season as a regular part of the Twins’ relief pitching corps. Now, with the Twins again looking to trade away veteran talent mid-season, the focus turns away from competing for a playoff berth to developing talent for the future. For Jorge Alcala, that developmental focus has meant being challenged by increasingly difficult game situations.

Minnesota's trade deadline approach will foreshadow plans for next season

Minnesota Twins pitcher José BerríosPhoto by Mike Carlson/Getty Images. The Minnesota Twins will resume their season on Friday. Coming out of the All Star break the Twins have a 39-50 record and are 15 games behind the division leading Chicago White Sox in the AL Central and 11.5 games out of a wild card spot. Their chances of contending for a playoff berth are scant -- just 1.0% according to FanGraphs and less than 0.1% according to Baseball-Reference.

Luis Arraez gives the Twins options at the trade deadline

Twenty four year old Luis Arraez has spent the past three seasons adding a throwback blend of contact and plate discipline to the Minnesota Twins lineup. Standing just 5-foot-9, Arraez was never regarded as an elite prospect due to a lack of power, limited athleticism, and a track record of leg injuries. However, he has more than made up for those perceived shortcomings with elite hand-eye coordination that enables some of baseball’s most impressive bat to ball hitting skills.

This past Sunday afternoon, Minnesota Twins designated hitter Nelson Cruz slugged the 434th home run of his career. That total ties him for 47th in Major League Baseball history, with two-time MVP Juan Gonzalez and five-time All Star Andruw Jones.

The pitching fundamental that is failing the Twins

Whenever the keys to successful pitching in baseball are discussed at any level, little league to major league, one of the first things surely to be mentioned is the importance of pitchers working ahead in the count. Throwing a first pitch strike and getting to two strikes as quickly as possible are seen as important fundamental goals for any pitcher to find success. According to this line of thinking, doing those things will lead to success more often than not. Failing to do so (i.e., falling behind in count), favors the batter and leads to pitching struggles.

The Twins' best opportunity to save their season is now

It is easy to lose sight of the marathon length of the Major League Baseball season. 162 games, played in parts of six different months, present many opportunities to draw seemingly definitive conclusions from small samples and incomplete data. Ups and downs will invariably occur for players and teams over the course of a schedule that long. Yet, every year, long hot or cold streaks that deviate from expectations inspire sports media, analysts, and fans to make declarations with confidence about the value of players or teams. Invariably, many of those turn out to be wrong.

Josh Donaldson is batting better than it seems

Part way through the second year of a four year, $92-million contract, it’s fair to say things have not quite gone according to plan for Minnesota Twins’ third baseman Josh Donaldson. Now 35, his first year and change in Minnesota has had its ups and downs.

It’s only mid-May and things are starting to look dire for the Minnesota Twins. A record that is 12 games under .500 after 38 games and a 10.5 game deficit in the AL Central division standings are not what anyone had in mind for this team. The roster was projected to compete for the division title and post a winning record by a comfortable margin.

What can kick start the stalled development of Max Kepler?

In the offseason after the 2019 season the baseball decision makers of the Minnesota Twins organization looked like they had made a shrewd bargain to lock up one of their young core pieces to a multi-year extension.

Photo: (AP Photo/David Dermer) One of the more surprising stories from the Minnesota Twins’ poor April is the ineffectiveness of starting pitcher Kenta Maeda. Through five starts, Maeda -- last season’s AL Cy Young Award runner-up -- is 1-2 with a 6.56 ERA, 1.76 WHIP, and .356 opponent batting average allowed. Already, in only 23.1 innings pitched, Maeda has allowed just one fewer run (19) and four fewer hits (36) than he did over last season’s 66.2 innings pitched (20 runs, 40 hits in 2020).

Breaking down the Twins' offense, position by position

Mitch Garver's struggles at the plate are a driving factor in the Twins' recent skidPhoto by Ed Zurga/Getty Images. Through 23 games, the Minnesota offense has scored 102 runs, an average of 4.43 runs per game. That average ranks 11th in the Major Leagues. The team’s overall offensive numbers are more on the good side of average than clearly good or bad, but the season-long data hides the depth of the team’s recent struggles at the plate.