Keeping Florida informed with the latest. Life isn’t a series of many moments, but one moment that is always changing. Catch me on: https://twitter.com/JoeMDuncan

The speculation about Ron DeSantis' presidential hopes has already begun 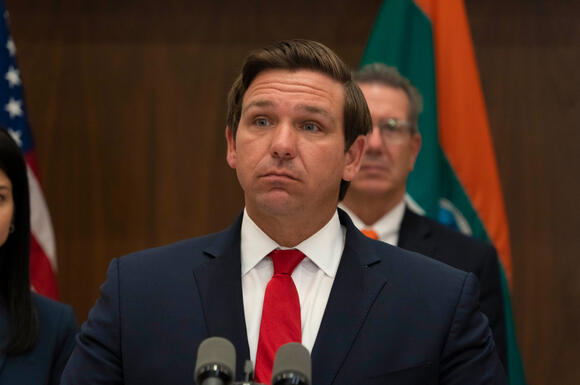 Did Donald Trump and Ron DeSantis break up and not tell anyone? In recent months, the Governor of Florida has been passing law after law that appeals strongly to former President Trump's base. While Trump has been out of the spotlight, off social media and our national media airwaves, it seems that Governor Ron DeSantis has taken over that spotlight, filling the void left in the party after a devastating loss to Joe Biden in November of 2020.

DeSantis has gone to war with colleges, passing a law to try and combat what he sees as "indoctrination" in our Florida state universities. He passed a law that banned Critical Race Theory in schools, a hot-button issue at current that he knew would make headlines around the nation. He banned so-called "vaccine passports" another controversial law that he knew would generate headlines.

And while many of these bills lack teeth or are solutions in search of a problem (Critical Race Theory isn't being taught in any public school system in Florida), it seems like they may have been designed to do something else entirely: help DeSantis secure the national spotlight as the successive heir to Trump's former presidency.

In fact, DeSantis in 2021 is running the exact same playbook that Trump in 2015 was running, only a few years in advance of the election. And then just this week, when Trump held his rally in Sarasota, Florida, governor Ron DeSantis didn't even show up. DeSantis was on the other side of the state handling the crisis of the building collapse in South Florida that's claimed 24 lives, at current, with 124 more people missing.

Just last night, the other portion of the building that had not collapsed was demolished and the search for victims and bodies will continue after Hurricane Elsa passes Florida.

Stop and think about the optics of this for a moment. While Trump was holding a rally, one of the massive rallies he's famous for (and ones that have begun to see people leaving early in droves), DeSantis was actually on the ground, doing the work, and getting stuff done that needed to be done.

All of this has caused many to speculate that the Florida Governor may be planning a presidential run of his own in 2024 to try and unseat the former champ. Let's face it, Trump is looking a little weathered these days. And all of DeSantis' hard work has been paying off. He recently polled higher than the former president in a straw poll conducted among Republican voters.

Trump is also embattled in several legal scandals at the moment, with the CFO of the Trump Organization, Allen Weiselberg, being arrested on charges of tax fraud. Former Trump attorney Michael Cohen says that these charges are just the "tip of the iceberg." It seems like Trump has a slew of problems of his own starting up which may hinder his time and energy from any potential 2024 White House run.

Meanwhile, an ex-staffer of the DeSantis campaign said that he could "guarantee" that DeSantis was aiming for the presidency. And speculation abounds as to whether or not he might be doing just that.

What do you think? Do you think DeSantis will try to make a run for the Presidency?

Keeping Florida informed with the latest. Life isn’t a series of many moments, but one moment that is always changing. Catch me on: https://twitter.com/JoeMDuncan

A South Florida preacher has been arrested again on brutal assault charges after allegedly strangling a woman in Broward County. Screenshot from Damian Archat's YouTube channelYouTube.

White Castle is now officially in Florida and now some are pushing for In-N-Out to move to the state from out West and Texas. Earlier this year, White Castle, the famous Northern chain restaurant, notable for its small, square burgers, opened in Orlando. White Castle has only opened a couple of new locations this year across the United States, with the chain expecting to open between three and five across the entirety of America this year.

A tale of two viruses with drastically different results. Florida isn’t doing well. Okay, sorry for the euphemism. It’s more like, Florida is screwed. This summer, we were gutted by the Delta variant of COVID-19. It maxed out our hospital system, pushing it to the brink of collapse. We’re hurting. The virus is destroying our businesses. We can’t get back to normal until we get everyone on board. And our Governor, Ron DeSantis, is pandering to a very small minority of crazies.

Finding the Love of Your Life Requires Patience — Lots of it

Love is one area of life where most of us fail miserably. And not only do we fail, but we usually fail over and over and over again. I swear love has to have the worst success rate of anything we do in life.

The physiology of information overload, information anxiety, and why we should unplug for a time. Anyone who remembers the 1993 hit movie Jurassic Park remembers the famous scene where they’re on the run from a tyrannizing Tyrannosaurus Rex. The lumbering dinosaur is waltzing around, tossing cars about with his nose, and stomping heavily and loudly, shaking the environment with each thunderous pound of his gigantic feet. He’s hunting. He’s hunting for human prey.

A Sentence That Changed my Views on Relationships

Four Words That Will Radically Improve Your Love Life. Man with a bouquet of flowers in front of a womanPixabay. Recently, a Twitter personality I follow made the big announcement: they were getting married. Yes! It was time for that life-changing moment when he took the plunge and vowed to say those magic words, “Til’ death do us part.”

A Simple Guide to Understanding the Threat of Disinformation

Child wearing a surgical mask as the COVID-19 pandemic unfoldsIzzy Park. It's been a crazy week. Heck, it's been a crazy month, a crazy quarter, and a crazy year. In Florida, we've become a battleground for the rights of children and families, we've navigated this global pandemic caused by the SARS-CoV-2 virus that's rocked the world.

One of the biggest parties in Florida will finally be back next month. Are you ready?. It was a sad day for festivalgoers all over the state of Florida, and even America, last year, when The Electric Daisy Carnival, colloquially known as EDC, had to be canceled due to the ongoing COVID-19 pandemic. The party that was supposed to take place in November of 2020 was called off, and now, the massive festival is finally back for another round of good vibes, good music, bright lights, and rides.

The Importance of Understanding Our Expectations in Relationships

Our relationship expectations can set us up for success or failure. But we have to have the right expectations. The two of us were walking down the street on a gorgeous Spring day in the Valley. It was sunny, there wasn’t a cloud in the sky. This is typical for Los Angeles. Oscar and I were headed to the bar. A Palestinian-born in Brooklyn, Oscar didn’t pull any punches. He said what was on his mind and spoke the truth. If you didn’t like it, that’s tough.

Low-Cost Vasectomy with an incredible staff at Dr. Curington's office in Kissimmee, Florida. I'll admit it. I didn't exactly know what to expect when I first completed my reservation. It's safe to say, I had reservations about making my reservation for getting a vasectomy. And it's easy to see why.

Florida's Hospitals Were Overwhelmed When My Friend Died

Yesterday, at approximately 4:36 PM, she took her last breath. As she drifted away into whatever world comes next, maybe blackness, maybe infinite light; maybe time itself ceasing to exist altogether, her sadness was obvious. But so too was her resignation. She wore it on her sleeve. Her life was coming to its conclusion and in the worst way possible.

DeSantis' school mask ban is shot down. What's next?. Well, folks, it's official. After a bitterly contested and long protracted legal battle, Florida's ban on local mask mandates that might be implemented by the counties or communities we live in has officially been ruled "unlawful" by a Florida court. I've been with you reporting on this the entire time, since back in May of this year, when Florida Governor DeSantis first signed the executive order that banned cities, counties, and municipalities from implementing mask mandates to keep their citizens safe.

Ron DeSantis and Joe Biden go toe-to-toe over the federal vaccine mandates. What began as a few minor skirmishes have heated up into an all-out war, of both political maneuvers and words, between President Joe Biden and Florida Governor Ron DeSantis. This whole thing kicked off when earlier this week President Biden announced a vaccine mandate for the United States. The mandate includes all federal employees and anyone working at a company who takes federal funding.

Check Out This Hidden Gem: A Delightful Mediterranean Cafe in Kissimmee, Florida

A pleasant surprise at a small cafe that served the best Mediterranean food on that side of town. Yesterday, I had to make a trek from Seminole County down to Osceola to go see the doctor in downtown Kissimmee. It was a long voyage and my girlfriend and I made a day out of it. If you're anything like me, you usually struggle to make it to your appointments on time. So, you overcompensate for this fact by showing up hours and hours early. This was me yesterday.

Relationships: Irresponsibility Isn't Cool Anymore. It's Time to Grow Up.

An old friend of mine recently got back in touch with me after a long time of not speaking. He tells me he’s trying to live the American dream. And by “American Dream,” I mean “the 2021 Irresponsible Millennial Version of the American Dream.” It means he’s pinning all his hopes on becoming an Instagram influencer.

Relationships: When I Was Lonely, I Wrote Letters to My Future Lover

How to ease loneliness with creativity — give yourself a purpose. Use this if you're lonely during the pandemic. My soul was tired and my belly was empty and desirous. I had wanderlust, but for a place that I could call home. My thoughts were clustered and I was restless. I felt a gnawing sense of isolation. I may have been in a city and surrounded by millions of people, but I felt so far away from everyone.

It's Time to Talk About the Lazy, Jobless Men of America

The older I get, the more I look around and realize a lot of men haven’t grown up and it's killing our relationships. Unpopular opinion: it’s time for us to stop pretending that finances aren’t a crucial factor in long-term relationships. They are. While wealth won’t make you happy, poverty will make you miserable.

The former President said in an interview that he'd knock the current President out if he could. Donald Trump Gives Thumbs Up to the CrowdShutterstock. Trump loves boxing. So much so that last Saturday night, none other than the former President Donald Trump was a guest announcer for the Evander Holyfield and Vitor Belfort fight. It seems to fit Trump's persona well that he'd be into contact sports.