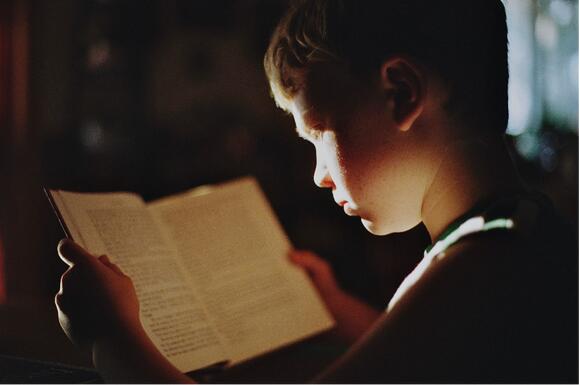 Image by Sabrina Eickhoff from Pixabay

Frowning in jealousy, the little boy stared up at the grownups looking down on him. The fact that they all had a superpower he craved seemed almost unfair and insulting.

Like a stranger in the land of the privileged, he resented his incapacity to do what everyone else did as second nature. And the more he thought about it, the more he wanted to change that.

One day, I’ll also be able to do it. You just wait.

From that day on, the boy worked hard to reach his first serious goal. The more he learned, the more powerful he felt. The more he practiced, the better at it he got. He would use every opportunity to polish his skill, to do it faster, and to be more fluent.

A few months later, as the boy was standing proud before his father, he uttered what is perhaps his most memorable childhood sentence:

Quite an odd choice of words for a six-year-old.

Having mastered the art of reading, the boy wouldn’t fret at written words, regardless of its nature. Entire sentences would often fly over his head, and concepts frequently proved to be beyond his understanding. Not that he minded: it was all part of the challenge, for reading was its own reward.

From magazine articles to Bible passages, the boy consumed all written information around him. He would often stop eating, getting dressed, or doing his homework the minute he set eyes on a new piece of text. Reading was his drug, his eyes his most valuable assets, his mind his most cherished hideout.

His passion had afforded him a fresh and enchanting playground to build his own world: a private dream-space filled with words and images.

The boy’s unusual thirst for knowledge set him apart from others. While they spent their time in the playground, he would sit alone and think, his mind wandering off to the passages he was so immersed in.

The pleasant solitude he indulged in eventually turned into dark loneliness. To his peers, he was an anomaly. A small bookworm weirdo who wouldn’t play football. The know-it-all wimp with no social skills. Most would ignore him. Some would pick on him.

Knowledge was both a blessing and a curse, for the boy was now at the receiving end of ever-escalating bullying. His days turned painful and lonely. He longed to be normal, like everyone else, but he didn’t want to give up reading, nor would he risk disappointing his parents, who celebrated his attachment to books.

For the first time, the boy felt something was missing in his life. Something his textbooks couldn’t offer: an escape route from the pain and loneliness he had been subjected to.

One day, the boy managed to get hold of a book that was unlike any other he’d seen before. It was a novel — for children, no less.

Rising to the new challenge, he read the preface and immersed himself in the first chapter. The boy soon learned that putting down that novel would be an extraordinarily difficult task, as he found the story of a pig befriending a stork absolutely enchanting.

Much to his surprise and joy, the boy started seeing himself in the protagonist: A lonely, bullied piglet, rejected by his peers, and isolated from society. An innocent yet unfortunate soul finding solace in comical conversations with his heart while wearing a disguise to keep a low profile.

The boy was amazed at the parallels with his own life. Both the reader and the protagonist were dealing with rejection, bullying, and loneliness. He had never felt so invested in a story, nor had he ever had a more wonderful read before. It was like the novel had been written for him.

A door had been opened, he’d entered, and found himself in a world he didn’t want to leave. He had discovered the escape route he was looking for.

Unsatisfied with his limited choice of reading material, the boy craved for more. And more he got, for his school opened a library aimed at children and, of all people, his mother was hired as the librarian.

That was the happiest year of his life. He could get his hands on any title he wanted, whenever he wanted. Day and night the boy read, immersed in worlds he didn’t even know existed. Worlds of crime-solving teenagers, potato-munching pirates, paper-eating monsters, and planet-saving moles.

The boy simply couldn’t get enough. Once he’d finished a story, the thrill of holding a new novel in his hands the following day was enough to keep him awake at night. The scent of paper delighted him. The illustrations — oh, how he loved them! — made him wonder about the artists behind them.

He started to memorize the names of his favorite authors: Otfried Preußler, Robert C. O’Brien, Ken Whitmore, Jordi Sierra, and Eric Wilson, to mention a few. The boy would often think about the people who had crafted such exquisite stories and sometimes daydreamed about meeting them.

He went through every page in wonder at the authors’ imaginations, as well as his own. Reading novels was like watching movies, only so much better. The characters looked the way he wanted, the scenery was as colorful as he wished. Even a musical score constantly played in his head as he read. The boy was in command, making every story his own.

Each novel transported him far away, allowing him to live a different life. Every story served as an escape route from his loneliness, from his bullies, from the pressure of good grades, and from his own weakness. For in every book he read, he wasn’t just a spectator — he was the protagonist.

One day he was a young detective, and the next, a shipwreck survivor. Regardless of their luck or lack thereof, the boy related to every one of those heroes. He savored their happiness, experienced their terror, felt their excitement, and endured their pain.

The boy had chosen to live a thousand different lives, and he loved every second of each.

Suddenly, the boy wasn’t so little anymore. His voice deepened, acne hit hard, and a thin mustache appeared. His body shifted considerably and so did his mind and heart. He had hit puberty, and with it, everything changed.

The novels he had held so dear soon faded into oblivion. Suddenly looking good and trying to be accepted became his top priority. He replaced his stories with shallow TV shows, trendy music, and pointless fads.

Without realizing it, the boy had given up on the only refuge he’d ever known from his loneliness and isolation. He had changed what made him feel alive for the sudden urge to be someone.

The boy grew to manhood, experiencing deep heartbreak, isolation, failure, and disappointment in the process. A lost and vulnerable creature, his heart once again yearned for an escape route.

One day, the man felt an inexplicable urge to enter a bookstore. As he browsed a seemingly endless list of titles, he stumbled upon several of his childhood novels. Long lost memories came rushing back, and as his heart was flooded with nostalgia, his love for reading sprang to life.

"I think I’m quite ready for another adventure!"

And so, the man dared to escape again. He fled to worlds of hobbits, dragons, Holy Grails, and haunted buildings. He flew to cities of crime and cold-served justice. He journeyed into funfairs of second opportunities. He relived the magic of stories that once again felt like they’d been written for him.

I know that man, for I see him in the mirror every morning. A man who’s still trying to make sense of everything around him, choosing a path of reading and writing to do so. A man who became a father-figure to a little girl who shares his passion for reading. And as she insatiably turns page after page, she is transported to the same places he once made his own.

“I just finished another book, Dad.”
“How did you like it, sweetheart?”
“I loved it.”

For the thirst of a reader is utterly unquenchable. It merely goes dormant from time to time, but it can’t ever be forgotten or resisted for long. It’s in the soul of that man with the heart of a boy, the same kid who has lived in a thousand different worlds.