The Most Delicious Street Food You Need To Try 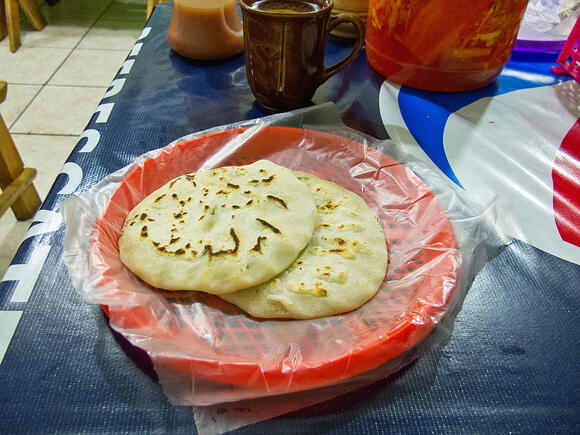 “Upon meeting me, everyone here in El Salvador asks the same two questions,” a Spanish girl once told me, “One, where are you from? and two, how do you like pupusas? — invariably in that order.”

I couldn’t help but smile. If she hadn’t said that, I too would have made the same inquiry. You see, that’s just how proud we Salvadorans are of our national dish, the pupusa.

Now, what is a pupusa? you may be wondering. Nothing really that fancy, and at the same time, the indisputable pinnacle of Salvadoran cuisine: A piece of flattened corn or rice dough filled with a variety of ingredients, cooked on a griddle for a few minutes and served with cabbage slaw, tomato sauce, and a drink of your choice.

Don’t let their simplicity deceive you: Pupusas are a savory meal enjoyed and celebrated by locals and tourists alike. In fact, no visit to El Salvador is considered complete without a taste of our beloved national dish, and those who try it are forever hooked by its deliciousness.

Types of pupusas by filling:

As you might have guessed, these ingredients can be combined, allowing the following variations:

Some ingredients that have recently become popular include shrimp, garlic, squash, tuna, avocado, mushrooms, spinach, basil, carrot, fish, and chicken. Now, the most common variety of pupusa is made of corn dough (yellowish in color), its main alternative being rice (white in color), and more recently, a combination of cornflour and mashed bananas.

These hard-working ladies spend hours standing in front of large steaming griddles, working in the heat like it’s nothing, cooking up to fifty pupusas simultaneously, and flipping them with their bare hands without flinching.

On average, pupusas cost from $0.35 to $0.60, although prices vary based on size, ingredients, the location and exclusivity of the vending establishment, and well, general quality. Depending on the grade of the ingredients and the skill of the pupusera in charge, pupusas can be delightfully good… or barely passable, at best.

The one norm that destroys all table manners

In El Salvador, there’s a sort of unofficial — yet seemingly unbreakable — rule dictating that pupusas can only be consumed by grabbing them with your bare fingers. No fork or knife should ever be used, or else you’ll be frowned upon, and be labeled a “fufurufo” — Salvadoran slang for a snob.

Don’t ever attempt to go against this tradition in the vicinity of my countryfolks: the mere sight of someone using silverware to eat a pupusa is almost offensive to them (although you may be given a pass if you’re a foreigner). Just make sure you have plenty of napkins around. You will need them.

A popular dish all over the globe

A pupusería in New Orleans — Source: Wikimedia Commons (CC BY 2.0)

Beyond their extensive regional consumption, the notoriety of pupusas spreads far and wide. They were first taken overseas during the 1980s, as many Salvadorans had to emigrate due to the Salvadoran Civil War. As a result, you can now find pupuserías (small restaurants and food stands where pupusas are commercialized) as far as Japan and Australia.

Our national dish is now so famous that The Guardian named it The Best Street Food In New York in 2011. Also, celebrities like American entertainer Steve Aoki and renowned German DJ Paul Van Dyk have publicly recognized its deliciousness.

Most notably, Leonardo DiCaprio, in a 2019 promotional group interview for Once Upon A Time In Hollywood, admitted he was a “pupusa man himself,” when he, Quentin Tarantino, Margot Robbie, and Brad Pitt were asked what their favorite Mexican food was. It is unclear whether DiCaprio was aware of the fact that pupusas are Salvadoran, but he did express his preference for our national dish nonetheless.

An identity symbol of Salvadoran culture

All in all, pupusas signify much more than a dish for Salvadorans. They’re the symbol of social interaction, celebration, pride, and cultural identity. Readily available everywhere, it’s virtually impossible to walk for one kilometer without finding a pupusería. They’re so popular, that starting in 2005, the second Sunday of November was declared National Pupusa Day by Salvadoran legislators.

Finally, if you haven’t tried pupusas, well, you’ve been missing out on a wonderful dish, my friend. And if this article has sparked your interest in them, let me give you a small heads-up: There’s no such thing as “trying” a pupusa. You simply won’t be able to stop at one.