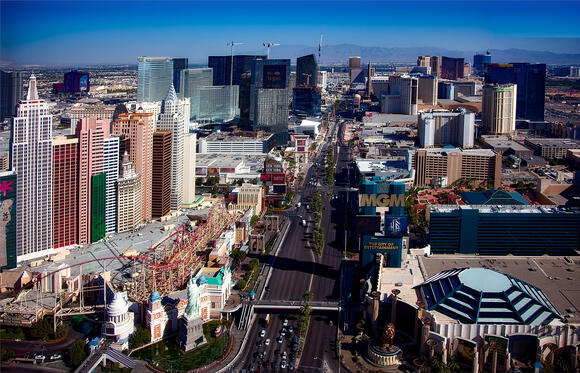 A Las Vegas Metropolitan Police officer was injured in a shooting early Sunday morning. About 1:33 a.m. on June 4 west of the Las Vegas Strip at Allegiant Stadium. The authorities responded to a shooting while working the venue's first live music event, the Illenium concert. The result was that a single suspect was taken into custody.

The official media release is as follows: "LVMPD officers were working a special event in the 3300 block of Al Davis Way when they responded to a disturbance incident involving a male," police said in a media release. "During this time, a struggle ensued and the suspect was able to gain access to an officer's weapon."

According to police, he fired a shot, hitting the officer. The officer was transported to University Medical Center Trauma with non-life threatening injuries. Another officer was also treated for undisclosed minor injuries. The suspect was also taken to UMC for an evaluation into "his erratic behavior," police said.

Additional information will be made available in 72 hours, police said. They are still assessing the situation. Allegiant Stadium is newly constructed and is most known for being home to the transferred team: the Raiders. The Raiders have not yet played a football game in this stadium, but as soon as the season begins, games will be the norm.

Fremont Street ExperienceImage by favoritesunfl from Pixabay. It seems like the Las Vegas City Council has stepped up to address the long-standing problems of the street performers on Fremont Street.

Everyone's well aware of the United States' current water crisis. 57% of the country is experiencing drought. And it seems like Las Vegas isn't safe either since 100% of the city is currently in some level of drought.

Even though the COVID vaccine gives you a good fighting chance against the infection, there are still chances of reinfection - something that Nevada residents are just coming to realize.

Missing Indiana couple found after a week in the mountains

An Indiana couple had been missing for what appears to be more than a week. But they have now been rescued. The rescuers found Beverly Barker with the body of her husband in the backseat of their Kia Soul on April 5, 2022, Tuesday.

A teenager who disappeared last summer was finally reunited with her parents over the weekend. At the same time, her stepfather was arrested for her kidnapping. Katuana Nateya, aged 14, was found on April 16, Saturday during a traffic stop in Nevada. The chief of Crescent City Police Department in Northern California, Richard Griffin, revealed that Katuana’s stepfather Santos Flores-Roman, aged 39 years old, had an active arrest warrant against him for abducting the young girl. He has been taken into custody.

Las Vegas residents are spooked after hearing gunshots at a house party late Saturday night, 16th April in the North Las Vegas Valley. Authorities received reports of gunshots in one of the houses of the gated community near Lone Mountain Road around 11:15 pm. When officers from the North Las Vegas Police Department arrived at the 4900 Block of Support Street, they found a group of people leaving the area.

It's been a week since the 8 New Now I-team informed the public about the racist remarks made at a conservative political event. Most of the attendees were big names in politics, leaving people with many unanswered questions. And yet these figures still haven't made any comment about their controversial appearance.

According to local law enforcement agencies, the body of the missing teenager, Naomi Irion, was found on a gravesite. Lyon and Churchill Sheriffs' offices told the public that Naomi's body was found on March 29, Tuesday. They got confirmation that it was indeed her on the following day.

bank robberyImage by USA-Reiseblogger from Pixabay. According to court and jail records, a candidate for the Nevada Assembly has been arrested for attempted robbery. La Juana Clark is the up-and-coming Democratic contender running against the current officeholder Selena Torres in Assembly District 3, located in the northwest Las Vegas Valley.

Las Vegas is looking to have a white New Year's Eve

Weather in Las Vegas has been exceptionally cold this winter. Though snow is an uncommon sight in the valley, gamblers may wish to bet on white. It's looking more likely than not that Las Vegas is going to bring in 2022 with a bit of snow.

Is this the first sign of a total cryptocurrency crash?

Notice of risk disclaimer: this is not financial advice. It appears to be an "ideal storm" for a cryptocurrency collision. $1.1 billion of leveraged bitcoin placements as well as $2.5 billion of crypto leveraged positions (including bitcoin) have been sold off Saturday, according to NYDIG.

Casino workers attempt to ban smoking in their workplace

Casino employees say lawmakers are hurrying with tax breaks for Atlantic City gambling establishments but are slow to ban smoking. They will hold a press conference at 9:30 a.m. Thursday at the War Memorial in Trenton to press lawmakers to prohibit cigarette smoking in gaming halls and simulcasting centers.

Kappa Sigma fraternity student was killed in an amateur fight. The full story was reported by KTNV and can be found here. Below are the highlights of this article. The death of a 20-year-old UNLV student at an amateur "fight night" has been ruled a homicide, a spokesman for Clark County confirmed on Monday. Dan Kulin confirmed the coroner's determination but noted "homicide" in this case means the death happened at the hands of another and does not necessarily denote a criminal act.

A 20-year-old man was arrested in connection with the death of another man whose body was found at a Summerlin construction site. He was shot to death, according to a report released Tuesday. The full story was reported by KTNV and can be found here. Below are the highlights of this article.

Two big stars may be in the future for Las Vegas. For one, singer/songwriter, Adele, will be joining the long list of accomplished stars with a Las Vegas residency. And Las Vegas may be adding to it's new professional sports team. First came professional hockey, then pro football, and now it seems Vegas is looking for a baseball team. The Oakland A's look like they'll be the choice team, and they're currently seeking a home.