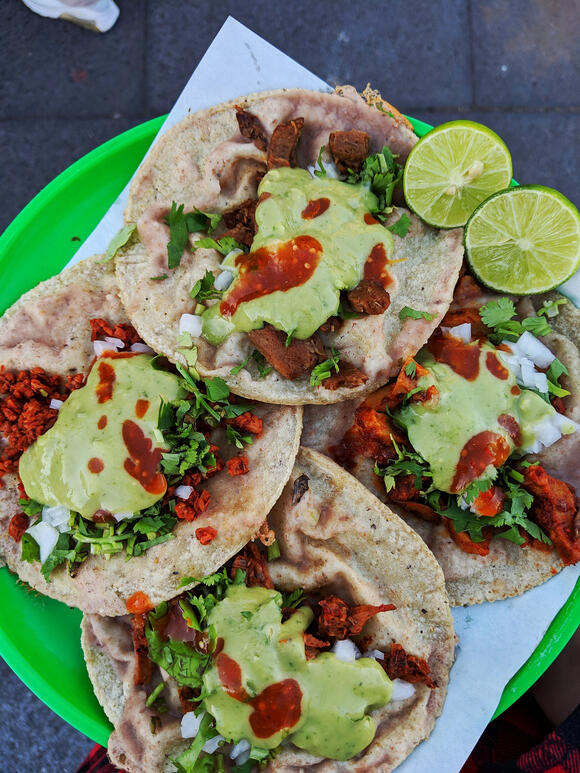 There's good news for the vegan tacos lovers visiting Las Vegas! There are two solid choices for vegan tacos. Both Tacotarian and Pancho’s Vegas Tacos have a couple locations to choose from. The restaurants are distinctly different, and depending on what you’re looking for, you’re likely to be happy with either one. If there are meat eaters in your group, they’re unlikely to be disappointed as well.

Tacotarian is the fancier of the two options with a smaller, more targeted menu. They predominantly feature tacos, and each of their tacos are made with four or more ingredients, giving a very “foodie friendly” vibe to their menu. The al pastor vegan taco, for example, is made with seitan on a corn tortilla featuring avocado crema, pineapple, pico, and salsa morita. Even the description feels decadent! When Kamala Harris passed through Las Vegas in March 2021, a quick stop at Tacotarian was on her itinerary. There are locations downtown and on the west side of the city.

Panchos Vegas Tacos used to be exclusively a Mexican eatery, but within the past year they’ve expanded their menu to include additional options like hotdogs, burgers, and pizza. They’re not entirely a taco shop, and seem to be more focused on shifting to vegan food that can be stored in the freezer and deep fried to order. Sticking to the tacos is a healthier, more original option. The carnitas taco (made from jackfruit) is definitely a menu highlight. It’s served classic taco style with onions and cilantro on top and a lime on the side to squeeze over the mock meat. Pancho’s Vegan Tacos has four locations in town (one temporarily closed due to Covid), with the closest to the Strip being a space on the east side of the city that used to house Liberachi’s museum.

There are more and more vegan restaurants opening in Las Vegas. And even the restaurants that aren’t exclusively vegan tend to offer true vegan options. Enjoy your tour of the eating options in Las Vegas, and if you enjoy vegan tacos, the city has you covered!

Las Vegas is looking to have a white New Year's Eve

Weather in Las Vegas has been exceptionally cold this winter. Though snow is an uncommon sight in the valley, gamblers may wish to bet on white. It's looking more likely than not that Las Vegas is going to bring in 2022 with a bit of snow.

Is this the first sign of a total cryptocurrency crash?

Notice of risk disclaimer: this is not financial advice. It appears to be an "ideal storm" for a cryptocurrency collision. $1.1 billion of leveraged bitcoin placements as well as $2.5 billion of crypto leveraged positions (including bitcoin) have been sold off Saturday, according to NYDIG.

Casino workers attempt to ban smoking in their workplace

Casino employees say lawmakers are hurrying with tax breaks for Atlantic City gambling establishments but are slow to ban smoking. They will hold a press conference at 9:30 a.m. Thursday at the War Memorial in Trenton to press lawmakers to prohibit cigarette smoking in gaming halls and simulcasting centers.

Kappa Sigma fraternity student was killed in an amateur fight. The full story was reported by KTNV and can be found here. Below are the highlights of this article. The death of a 20-year-old UNLV student at an amateur "fight night" has been ruled a homicide, a spokesman for Clark County confirmed on Monday. Dan Kulin confirmed the coroner's determination but noted "homicide" in this case means the death happened at the hands of another and does not necessarily denote a criminal act.

A 20-year-old man was arrested in connection with the death of another man whose body was found at a Summerlin construction site. He was shot to death, according to a report released Tuesday. The full story was reported by KTNV and can be found here. Below are the highlights of this article.

Two big stars may be in the future for Las Vegas. For one, singer/songwriter, Adele, will be joining the long list of accomplished stars with a Las Vegas residency. And Las Vegas may be adding to it's new professional sports team. First came professional hockey, then pro football, and now it seems Vegas is looking for a baseball team. The Oakland A's look like they'll be the choice team, and they're currently seeking a home.