Wilken, O’Shea TalkAcquisition of HS Pharmaceuticals And What It Means For The Future Of XCRT (via SmallCapVoice) 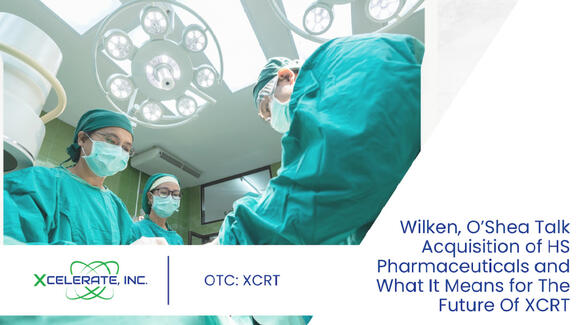 CEO Mike of O’Shea of Xcelerate, Inc., a development stage startup focused on the development of cutting-edge medtech applications, met with SmallCapVoice.com to discuss the recent appointment of a new board member and the acquisition of a rather sizeable patent portfolio.

This acquisition expands upon Xcelerate’s mission of acquiring innovation in the engineering and patent stages of production for further development and commercialization within the medical industry.

O’Shea was joined by Jon Wilken, president and CEO of HS Pharmaceuticals, LLC. They opened up about his new role as an advisory board member for Xcelerate and what has led up to the acquisition to this point.

Wilken spent more than 30 years in the supermarket retail industry before leaving the business in 2002. He also spent more than 10 years teaching entrepreneurial leadership at Clemson University. Venturing into the biopharmaceuticals industry, he then left academia and accepted the role as CEO and president of HS Pharmaceuticals, where he led the charge in the discovery of many early-stage drugs and immunotherapies.

As CEO of HS Pharmaceuticals, Wilken would focus on innovative and breakthrough treatments for chronic wounds and conditions that affect the human body on a molecular level, creating dermatological products for chronic wounds, burns, and drug-resistant infections, as well as patented formulas for some of the most game-changing cosmetics and beauty products on the market.

Throughout the years, the company would also focus on oncology, autoimmune therapies, cancer treatment and bone regeneration for both man and animal – many of which would be developed in collaboration with scientists at the Lakehead and Cambridge Universities.

In a previous press release, O’Shea stated that “HS Pharmaceuticals has been shepherding these patents for the last 10+ years in conjunction with world-renowned scientists and universities, and we are excited to take this amazing intellectual property to the next level.”

“The Board and I welcome Jon,” he continued, “and look forward to collaborating with him on the various projects and, more especially, assisting in assimilating the recently acquired patent portfolio into our business plan. Jon has spent years coordinating the development of these patents and coordinating the efforts of various research scientists and universities.”

For the last 2 years, both companies have been in negotiation, making sure the climate was suitable when merging HS Pharmaceuticals into the fold of Xcelerate and its growing list of revolutionary technologies.

Since announcing that it had signed a purchase agreement to acquire a global portfolio of patents, patents pending, and technology licenses from HS Pharmaceuticals LLC, Xcelerate would go on to add a number of patents and patents pending across the U.S., Canada and Eurasia, which can be found here.

“We’re excited that we’re excited about this relationship with Mike and his team,” states Wilken. “We’re looking forward to our scientists, our research people, our PhDs working with the people that Mike has on board. It’s going to be a great collaboration.”

Xcelerate plans on taking the research conducted by HS Pharmaceuticals and its entire portfolio of patents to the next level. Together, the companies have devised a plan that is expected to become of great interest to major pharmaceutical houses across the industry.

Listen to the interview by SmallCapVoice.com here:

Heroes league was designed to ignite a growing interest in technology, business and the skilled trades in students grades Kindergarten through 6th — encouraging them to learn and adopt 21st century skills through mindful gamification.

Let's Continue The Conversation On Green Reporting: Is It Important, And Can Simple Changes Strengthen Green Policies?

The SEC proposed "green" reporting for all stocks traded on the public market. Many companies have already begun implementing this policy. Reporting will protect shareholder interests, as the world continues to transition towards a net-zero future.

Xcelerating the Business of Global Healthcare

In March 2020, telemedicine became essential not only in the U.S. but to the entire world, as we faced the uncertainty of a global coronavirus pandemic. Almost overnight, technology became paramount in healthcare and telehealth and telemedicine programs became top level advertising. While we’ve been relatively fortunate with this transition, believe it or not, there are villages across this planet that have experienced decades of limited-to-no access to simple medical equipment, qualified healthcare professionals or sanitary treatment facilities.

It's said that a deficit in graphite and nickel could thwart EV production post-2022. Contrary to popular belief, North American companies already have the power to begin domestic battery production, mining and processing essential minerals on U.S. and Canadian soil.

Stock Market Volatility Continues: Alternative Investments To Get Through The FUD

DISCLAIMER:The author of this article holds stock in one or more of the below-mentioned companies. This article is meant to inform and educate. It does not and should not constitute financial advice.

The Business Warrior Corp. (OTC: BZWR) was founded in 2014 and has provided game-changing solutions to more than 25,000 under-resourced and under-funded small businesses across the United States, boosting them into local dominance and ultimately fueling their small business growth.

Allergies are the sixth leading cause of chronic illness across the globe. Estimated to cost more than $18 billion a year, allergies can play a major role in the massive expense both businesses and healthcare systems experience annually. This doesn’t even include factors related to paid time off, productivity-related concerns or the rescheduling of internal roadmaps due to last-minute “call-outs” or ongoing turnover.

DISCLAIMER: The author of this article holds stock in one or more of the below-mentioned companies. This article is meant to inform and educate. It does not and should not constitute financial advice.

Can You De-Risk Your Portfolio by Investing in Diversified Mining Companies During the Great Transition?

DISCLAIMER: The author of this article holds stock in one or more of the above companies mentioned above and regularly does her due diligence to understand each of those companies, the markets they serve, their impact on the environment and their individual competitive landscapes. This article is meant to inform and educate. It does not and should not constitute financial advice, as the author believes it is ultimately up to the reader to conduct his or her own analysis before making any investment into any company either now or later.

Big Tech and EV Will Disrupt the Shopping Experience through 2030 | Can They Save Retail and Entertainment?

DISCLAIMER: The author of this article holds stock in one or more of the above companies mentioned above and regularly does her due diligence to understand each of those companies, the markets they serve, their impact on the environment and their individual competitive landscapes. This article is meant to inform and educate. It does not and should not constitute financial advice, as the author believes it is ultimately up to the reader to conduct his or her own analysis before making any investment into any company either now or later.

A few weeks back, The Ford Motor Co. (NYSE: F) announced that it would up the production of its electric Ford F-150 after the company saw so much demand for the electric version of its cornerstone pickup truck. In fact, the company went so far as to expand production from just 40,000 units to promising consumers that more than 150,000 would be delivered per year.

With $1.15M from Canadian Federal Government Partner, MITACS, NPEV Readies for Production in Less than 60 Days

We will soon be entering the next generation of EV charging capabilities as a society. Worksport Ltd. (NASDAQ: WKSP) (NASDAQ: WKSPW), the world's leading manufacturer of tonneau covers for pickup trucks and the creator of the world’s first solar tonneau for electric vehicles, through its subsidiary Terravis Energy Inc., received a $1.15 million grant from MITACS – a nonprofit, national research organization in Canada, supporting industrial and social innovation while partnering with earth-shaking initiatives in industry, academia, and government.

The other day, a public transit company in Montpellier, France, made the decision to go “all-electric” after concluding that hydrogen would cost up to six times more than operating on battery power. To do so, they’re canceling a 51-bus contract already in motion.

Image via Surge Battery Metals, Inc. In order to create a more sustainable future, a number of world leaders came together with a plan to phase out the sale of newly manufactured, gas-powered vehicles by the beginning of 2030. Some have even taken it a step further, developing plans that would make it virtually impossible to fuel gas-powered engines as early as 2050.

What's an NPEV, and Will it Solve Our Retail and Infrastructure Problems?

A recent article by Jennifer Sensiba presented a few key points on the importance of demand, accessibility and location of traditional gas stations on U.S. roadways. In her article, “Why We Can’t Treat EV Charging Like Gas Stations,” she laid out the framework as to why so many gas stations are failed businesses, even in prime locations where gas stations should have otherwise thrived.

Meet Outrider™ -- the pioneer in autonomous yard operations for logistics hubs across the U.S. It’s facilitating the move by large corporations to automate existing production environments more efficiently and with a heightened focus on both safety and collaboration.

What Was That Wednesday Night? And, What Happens If All Of A Sudden We Lost Our Grid?

Screenshot via Warren’s Real Breaking News! on Meta. Oh, my! What was that Wednesday night? At between 8 p.m. and 8:30 p.m., everything in my house went black for about 2 seconds before returning to normal. My TVs, my lights in the kitchen, the baby’s room, and even my indoor tropical garden, which I keep lit with about 30 or more energy-efficient grow lights, so my plants don’t die in the winter.

Who’s Kristin Riley? And, What Are Her Goals for the 4th Ward?

Kristin Riley, running for Warren Councilwoman, 4th WardImage via Jessica N. Abraham. On November 2, residents in the 4th ward of Warren, Ohio, will be voting for their next election, and one candidate is really standing out.