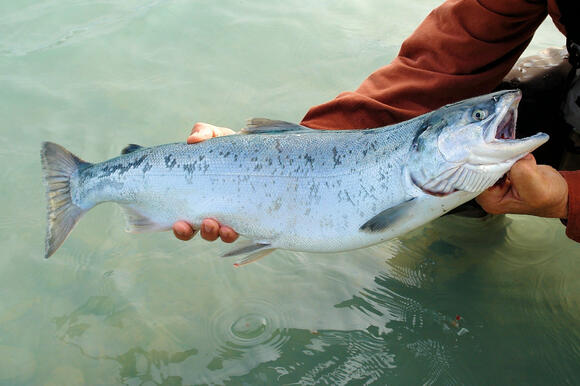 Image by Barbara Jackson from Pixabay

Pioneer, Ohio, will be the new home to large-scale salmon farming.

AquaBounty Technologies, Inc. (NASDAQ: AQB) is a land-based aquaculture company utilizing technology, announced that it has identified Pioneer, Ohio, as the location for its newly planned genetically engineered salmon farm. In addition, the company is finalizing the design of its proprietary fishery in what will be 479,000 square feet of wall-to-wall fish farming.

The Company’s genetically engineered salmon program is based upon a single, specific molecular modification in salmon that results in more rapid growth in early development.

Construction will begin in late 2021. The company will begin stocking its commercial salmon in 2023.

The company has a mission of ensuring the availability of high-quality seafood to meet global consumer demand while addressing critical production constraints in the most popular farmed species.

Today, we’re seeing the loss of many fish species across the world, with mysterious deaths reported in mass due to unknown -- but potentially climate -- concerns.

AquaBounty raises salmon that are free of antibiotics and other contaminants. Their land-based Recirculating Aquaculture Systems (“RAS”) are designed to prevent disease and to include multiple levels of fish containment to protect wild fish populations while reducing both the carbon footprint and the risk of mechanically polluted marine-based ecosystems in comparison with those of traditional sea-cage farming.

“We are excited to announce Pioneer, Ohio as the location of our next farm,” said Sylvia Wulf, Chief Executive Officer of AquaBounty. “After an intensive analysis of the site data and the completion of substantial due diligence, Pioneer met our selection requirements. The Village of Pioneer, Williams County, the State of Ohio, JobsOhio and the Regional Growth Partnership have all been a pleasure to work with and are highly supportive of the economic benefits we plan to bring to the community.”

This farm will be AquaBounty’s first large-scale commercial facility with a projected production capacity of 10,000 metric tons. The company expects to invest over $200 million in the project. The farm itself is expected to bring over 100 new jobs to the Pioneer area.

“The state of Ohio currently is finalizing a package of economic incentives to support AquaBounty’s location at the Pioneer site, as the plan for the new farm is contingent upon approval of state and local incentives. Details of the site purchase have been agreed upon, and we expect to begin construction by the end of the year,” concluded Wulf.

“AquaBounty’s decision to choose Ohio for its first large-scale aquaculture facility is more evidence that Ohio is emerging from the pandemic stronger than before,” said J.P. Nauseef, JobsOhio president and CEO. “This investment will bring 112 new jobs to Northwest Ohio, further solidifying the region’s role as a national leader in agribusiness production and distribution.”

Lt. Governor Jon Husted, Director of Innovate Ohio, and Ohio Bureau of Motor Vehicles (BMV) Registrar Charlie Norman joined representatives from Meijer and Intellectual Technology, Inc. to announce the pilot launch of new BMV Express self-service kiosks to improve service for drivers in Ohio. Customers may use the new technology to conveniently renew their driver's license or identification card with little or no wait time, while also being able to conduct other business on the spot.

Image of EmbraerX Eve via Eve Urban Air Mobility Solutions, Inc./EmbraerX. Contrary to popular belief, an electric vehicle doesn't necessarily mean an autonomous car or truck. In fact, it can be an electric bike, motorcycle, bus or even plane.

Hosted by the United Way of Hancock County, First National Bank and the Marathon Center for the Performing Arts in Findlay, Ohio, independent artists, 18 years or older from “the 419,” are being called to compete in the 2021 “419 Sings” music competition.

"Light commercial vehicles and buses continue to present significant opportunities as they lead the commercial-vehicle segment's shift to fully electrified platforms,” states James Kamsickas, Chairman and CEO of Dana, upon announcing the company’s partnership with Switch Mobility in the development of electrified commercial vehicles.

Here in Warren, Ohio, we’re going to see a lot more changes taken place than we’ve seen in years. There will be more jobs, better infrastructure -- the roads will be less vulnerable -- and it’s all thanks to an electrified future.

Hey, Cleveland! Second Grade Teacher Needs Your Help Getting Headphones for Her Students.

It's that time of year again, and remote students are returning to the classroom after a year-and-a-half hiatus. After spending almost two school years in the solace of their rooms, students will be hyper, energetic and unknowingly loud, as other students try to focus on what the teacher is trying to teach.

"I met her, and she was like this crazy dog. She was running all over the place, on her back wanting her belly rubbed and I was like, 'Oh my gosh, I have to have this dog the rest of my life?’” says Louie Belluomini when speaking about the first time he met his service dog, Star.

Lookout, Sandusky! Cedar Fair Entertainment Entering the Wide World of eSports ...And, No, They're Not Playing!

Image via Xavier Caré / Wikimedia Commons / CC BY-SA 4.0. Sandusky based Cedar Fair Entertainment (NYSE:FUN) wants to get into the eSports arena with plans to add esports to its lineup of rollercoasters, waterparks and thrill rides, including 11 amusement parks and 4 separate waterparks.

Image by the U.S. D.O.E.'s Argonne National Library. The Argonne National Laboratory is a U.S. Department of Energy research center for engineering and the multidisciplinary sciences. Together with lead battery manufacturers, they have joined forces with The University of Toledo (Toledo, Ohio) to extend the life and performance of lead batteries for use in several industry applications.

New Study in Columbus Points to Lack of Protein as One Major Cause of Diabetes, Greater Physical Limitations

“Half of all Americans living with diabetes may be consuming less than the recommended amount of protein, which is associated with greater physical limitations” -- a bold hypothesis made by researchers at The Ohio State University School of Health and Rehabilitation Sciences in Columbus, Ohio.

In 2021 alone, Chipotle restaurants across Europe and North America are expected to use approximately 4.5 million cases of avocados, equivalent to more than 100 million pounds of fruit, for its famous guacamole dip.

Which North Canton Business is Home to One of America's Best Employers for Women by Forbes?

North Canton, Ohio, is home to America’s most women-friendly businesses, thanks to a Fortune 500 employer. The Timken Company (NYSE: TKR) has been named one of “America’s Best Employers for Women in 2021” by Forbes.

A Karaoke Car Wash? Unlimited Washes for a Year? Let Me Click This Real Fast

Picture this -- Madagascar on Wheels -- a Karaoke showdown for Cleveland’s finest. That’s precisely what locally-owned Rainforest Car Wash is getting ready to do. Ohio has never been crazier!

Last week, Laird Connectivity (OTCMKTS: LARRF) went global with the rollout of their new 5G Phantom Antenna. The Phantom Antenna Family has been considered the industry standard in connectivity for over two decades. They’re continuing that tradition with a new generation with on- and off-ground solutions. Offering global cellular in a single antenna, the Phantom antenna has earned the reputation for its application, coverage and adaptability across multiple industries.

The SprayWorks Group Combats Supply Chain and Material Shortages, Expands Facilities to Create their Own

Earlier this year, the SprayWorks Equipment Group, an industrial equipment supplier in Kent, Ohio, moved to a new facility that would increase its building size by almost 20,000 sq. ft. They hoped to combat supply chain-related issues associated with component and material shortages and inflation taking place around the world.

The Goodyear Rubber & Tire Company (NASDAQ: GT) represents generations of the hard-working Akron community at the 2021 EAA AirVenture Oshkosh Airshow in Winnebago County, Wisconsin July 26, to August 1, 2021. The airshow will take place at the Wittman Regional Airport (KOSH) -- as it returns from a two-year, post-pandemic hiatus. Here, the company will be unveiling its newest blimp, the Wingfoot Three, which hails from the one and only Wingfoot Lake in Suffield, Ohio and is 54 feet longer thank its predecessor.

For the last 30 years, the Victory of Light Expo has been amongst -- if not the largest -- metaphysical events in the Midwest. “When I produced my first Victory of Light Expo in 1992, I could never have imagined that the expo would become so large,” said Victor Paruta. Paruta started his expo after an encounter with another psychic who entered his book store.

Hey, Warren! Its Time to Treat Your Pup with New Dunkin'-Inspired BARK Dog Toys and a Whipped "Cup for Pup"

Yesterday, the Dunkin’ Joy in Childhood Foundation announced new Dunkin’-inspired dogs toys and treats for man’s best friend — and they're coming to Warren, Ohio!. The foundation is on the mission of providing kids battling hunger, illness and food insecurity with the simple joys of childhood and has granted more than $30 million since its inception in 2006. The foundation strives to provide $7 million in relief this year alone.