Jeremy is a freelance journalist covering health, energy, labor, and local politics. Reach him at jeremy.beren@newsbreak.com. 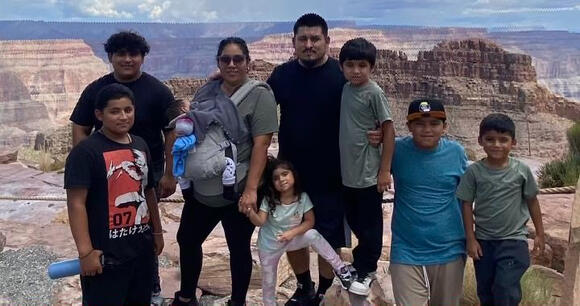 Emy Gardea with her family.Courtesy of Salt River Project

(Phoenix) — Five months ago, Emy Gardea moved with her husband and seven children into a home in west Phoenix's Maryvale neighborhood.

The house came with a spacious yard and a fenceless pool — to Gardea's surprise and her kids' delight.

Gardea was concerned about the security buffer a fence would offer, so for a while, her kids — ranging in age from one-to 17-years old — could not play much in the backyard unless a parent was watching.

"You can tell your kids (about water safety), but they can get caught up so much in playING that they don't realize how a simple accident can happen in the blink of an eye," Gardea told NewsBreak via phone. "It can turn very tragic."

The Gardea family was one of nine selected to receive a free pool fence installation as part of a cooperative effort between the Child Crisis Arizona, United Phoenix Firefighters Charities (UPFC), and the Salt River Project (SRP). Gardea came across an application via a social media link, and received word in August that it had been accepted.

"Just since then, my kids have already been able to think of fun things to do and enjoy the backyard safely," she said. "Everyone was excited, especially the kids." 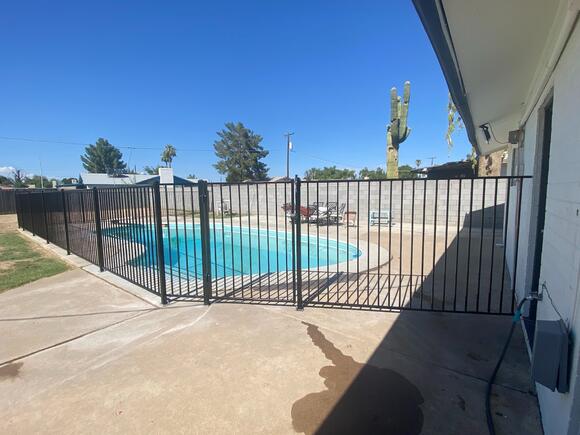 Child Crisis Arizona is the Pool Fence Safety Program's facilitator. The organization was responsible for selecting the committee that combed through 33 applications and rendered final decisions on the winning families.

"There is nothing more aggressive in preventing tragedies than putting in a pool fence," UPFC spokesperson David Ramirez said via statement. "Child drownings are truly a community problem. We are encouraged to have organizations like SRP and Child Crisis Arizona step up and lead this effort."

In June, Phoenix Children's Hospital stated that children in Arizona aged one to four are drowning at a rate nearly twice the national average. The state reported 16 fatal child drownings in pools or spas last year, twice the number reported in the 2020 swim season.

Jessica Ochoa lives in Mesa, where she is helping to raise three children — including a nine-year-old with cognitive and developmental disabilities, as well as a baby born during the COVID-19 pandemic.

Ochoa's sister heard about the Pool Fence Safety Program through Instagram and encouraged her to apply, given her family's unique situation.

"I was just imagining the craziest things that could happen with the back door or side gate being left open," Ochoa told NewsBreak via phone. "When I saw the Instagram post, I thought it was a perfect opportunity (for a) sense of peace."

Ochoa's application was approved and she had her fence installed in August, just in time for Labor Day. She is the only member of her extended family with a backyard pool, and having the barrier in place allowed her to comfortably host her sister, her parents, and her friends for the holiday.

Ochoa said her feelings of being overwhelmed have been eased since her fence with a door that closes in seconds went up adjacent to her pool.

"I feel blessed in a sense that I was lucky enough to be picked ... It's just awesome that (Child Crisis Arizona) did this, especially with all the drownings the past year," she said.

Jeremy is a freelance journalist covering health, energy, labor, and local politics. Reach him at jeremy.beren@newsbreak.com.

(Florence, Ariz.) — Now, you can reserve your picnic spot at Pinal County's parks online. County officials have announced a new system where residents and visitors can reserve time and space within four of the county's parks.

(Florence, Ariz.) — Following heated primaries in Pinal County, midterm elections are quickly approaching in Arizona, with several key races tightening up and voters preparing to make up their minds.

(Apache Junction, Ariz.) — Chief Mike Pooley arrived at the Apache Junction Police Department in January to take up his new position. Upon starting his duties as police chief, one of the first things Pooley noticed was that his new department had some technological catching-up to do.

A protester holds a sign during a demonstration outside the U.S. Supreme Court following the overturning of Roe v. Wade in June.Ted Eytan/Flickr. (Tucson, Ariz.) — Reaction continues to pour in from reproductive rights advocates and state lawmakers following a Pima County Superior Court decision lifting an injunction on Arizona's previously unenforceable 1864 abortion ban.

(Coolidge, Ariz.) — Entering his eighth season as the head coach of the school's men's basketball program, Tramaine Aaron's main goal is putting out a product in which the Central Arizona College faithful can take pride.

(Phoenix) — Despite a federal judge’s ruling on Friday blocking the enforcement of a controversial law enforcement recording bill, advocates and attorneys at the American Civil Liberties Union (ACLU) of Arizona remain worried about future measures that penalize accountability of police.

How to avoid “sextortion”: Pinal officials to offer tips at documentary screening this weekend

(Florence, Ariz.) — One state lawmaker who toured a state prison in Pinal County last week believes the five-hour walkthrough did not provide a clear picture of the conditions inside.

Pitcher (middle) with members of MOMnation AZ.Courtesy of Sara Pitcher. Warning: This story contains graphic depictions of domestic violence including sexual assault. (Florence, Ariz.) — The Phoenix woman whose story inspired the Pinal County Attorney's Office to launch its domestic abuse awareness program finally got some justice this week when the ex-husband who tried to kill her was sentenced to life in prison.

(Florence, Ariz.) — Each year, the Pinal County Attorney's Office makes it a priority to step out into the community and hold what community liaison Latisha Joseph calls "awareness events." One of the events this year is designed to raise awareness and support for domestic violence victims, and the PCAO wants to involve as many of the county's businesses and organizations as possible.

(Maricopa, Ariz.) —An opportunity to speak face-to-face with county attorney Kent Volkmer is coming to the Copper Sky Community Center this week. Volkmer, alongside Maricopa police chief James Hughes, will be available to meet with residents and answer their questions at a "Coffee with Kent and the Chief" event on Aug. 25.

(Queen Creek, Ariz.) — Drivers commuting along the border between Maricopa and Pinal counties received welcome news on Thursday, as the Arizona Department of Transportation confirmed work to extend State Route 24 was complete.

(Queen Creek, Ariz.) — A Utah coffeehouse chain is set to expand into Arizona, with three new stores on the horizon for the Phoenix metro area. Beans & Brews Coffeehouse already has one Arizona store, situated in Colorado City. But the company has recently confirmed its plan to openthree additional locations in Queen Creek and San Tan Valley.

(Florence, Ariz.) — The embattled Pinal County Elections Department on Wednesday announced it had completed tabulating and compiling the results from the Aug. 2 primary and municipal elections.