I am a full-time licensed REALTOR​ ® serving the Greater Houston area. I provide quick tips, checklists for buying and selling a house, neighborhood spotlights, and much more. If you have any inquiries, do not hesitate to contact me at 832-286-8636.

All About Spring, Texas 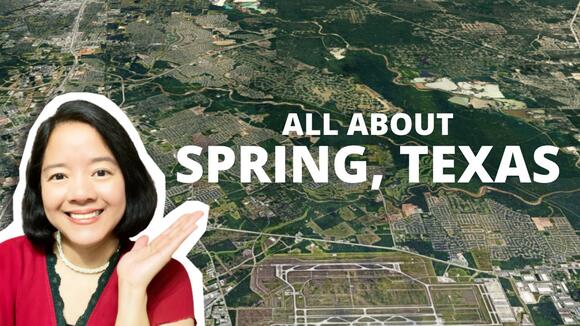 Texas is the second-largest US state in terms of population and land area. We have 962 cities spread over 254 counties and an estimated population of 29 million. Deciding which city to move to in this area can be confusing for someone from out of state. So, I decided to write this article to give you an insight, hoping that it will somehow help you make an educated decision in choosing a city or county to call home. 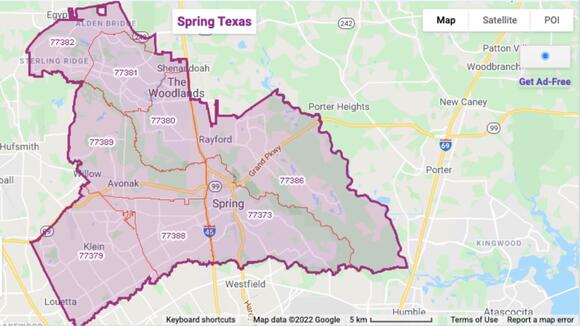 This place was originally inhabited by Orcuquiza Native Americans before German immigrants settled in the area in the mid-1800s and began farming the land. In order for the settlers to better transport their produce, railroads were built. These railroad workers experienced a particularly harsh winter while laying down the tracks that when they reach the area in the springtime, they got excited about winter ending and called it "Camp Spring". In 1873, the camp was platted and became a settlement. The word "camp" was dropped and Spring became the central operation base of railroad workers,

From a small population of 153 residents back in the 1800s, Spring is now inhabited by more than 380K citizens as reflected by the ACS census data from 2018. 59% of this population are whites, 21% are Hispanic, 10% are Blacks, 6% are Asians and the remaining 4% is a combination of Native Americans and Islanders. 3% of these moved from out of state while around 1% relocated from abroad.

Houston, Texas is one of the fastest-growing cities in the United States when it comes to migration according to a U-Haul migration report. In 2018, around 12,000 out-of-state newcomers and 4,000 foreigners chose Spring to be their new home.

The influx of immigrants in Spring was primarily caused by the low cost of living. It may be a bit higher than the whole of Texas but it is it still considerably low compared to the entire nation. For example, according to Zillow, the home value index across the United States is $320,662. In Spring, that will already get you a decent 1k-3k square foot, 3-4 bedroom single-family home depending on the location. While that same value can only get you a 200 sqft studio apartment to a 500 sq ft 1-bedroom home in San Diego, CA. Energy rates are also cheaper not just because Spring has easy access to natural gas but due to the fact that Texas is among the 16 states that deregulate their energy. According to electricchoice.com, the average home in Texas consumes about 1,174 kWh of power each month which just costs them around $133.33. When it comes to transportation, although Spring relies heavily on vehicles for mobility and the average commute is 6.9 hours longer than the average commute nationwide, Spring residents still spend less at $9,005 annually compared to the national average of $9,760 per year according to 24/7wallst.com. The average cost of food may be a little expensive at $2,954/annually for an individual compared to the entire state at $2,897/annually, it is still cheaper when you look at the average cost of food nationwide at $3,240. And let's not forget the taxes. Texas is among the 9 states that do not impose an income tax.

Spring is following the Federal Minimum wage rate of $7.25/hr, but most employers are paying more than the minimum. One has to have an annual salary of $67,000 or higher to live comfortably in this area according to the Houston Chronicle.

And speaking of living comfortably, Spring has several parks, gardens and nature centers where residents can enjoy a breath of fresh air and relax after a long week of work. Health buffs, nature lovers and fur parents will surely enjoy walking, jogging, biking, canoeing and fishing in the 380-acre Pundt Park which connects to Dennis Johnston Park, Stahl Preserve, Carter Park and Jesse H. Jones Park & Nature Center. Families can cool off the summer heat at the Hurricane Harbor Splashtown with its wave pools, kiddie pools, water slides and splash pads. Those who love history will undoubtedly appreciate the past at the Old Town Spring, the historic location of a 19th-century railroad hub that grew into Spring, Texas and is now home to over 100 local businesses. While those who are fascinated by the macabre will certainly be amused at the National Museum of Funeral History, the world's largest collection of artifacts and replicas from memorial and burial services around the globe.

Spring is zoned to 3 different school districts - Spring ISD, Klein ISD and Conroe ISD. The first two independent school districts are highly rated while the latter has an acceptable performance but needs to provide additional academic support to many more students. For detailed information about each school district, you may visit their respective website. You may also check tea.texas.gov for a more comprehensive school rating.

Indeed, Spring is one of the best places to live in Texas.

ONLINE PREPARING AND LISTING A HOUSE FOR SALE https://www.subscribepage.com/preparing_and_listing_a_house_for_sale

**Jennifer Yoingco is a full-time licensed Houston Texas REALTOR (#648293) with Walzel Properties, LLC. She has been helping first-time homebuyers, experienced buyers and sellers search homes for sale, houses for sale in the greater Houston area (serving Houston, Tomball, Spring, The Woodlands, Cypress, Conroe, Magnolia, Sugarland, Richmond, and the surrounding cities). She negotiates to the client's advantage by using cutting-edge digital marketing technology. She is teamed with marketing professionals who can showcase the home to the best advantage. Contact her for any real estate needs. Email: JenYoingco7@gmail.com (832)286-8636**

I am a full-time licensed REALTOR​ ® serving the Greater Houston area. I provide quick tips, checklists for buying and selling a house, neighborhood spotlights, and much more. If you have any inquiries, do not hesitate to contact me at 832-286-8636.

A feature about Spring, Texas's desirable neighborhoods, was one of my most-viewed articles on NewsBreak. It seems like a lot of people are interested in the Spring area. And who wouldn't? It is just a 24-mile drive from Houston, around 9 miles from The Woodlands, and offers plenty of entertainment, dining, and shopping to choose from, a high-quality education, a low crime rate, and affordable housing. What could be better than that?

Spring, Texas: The Pros and Cons

What is the first thing you do when deciding to relocate to another city, state, or country? What factors do you consider before moving? You find out more about them! Right? You research the neighborhood, you check the crime rate, you find which school districts are the best, you look for places with the most employment opportunities, you analyze their cost of living, and you ask around how it is to actually live in that place.

Do you have plans to move? Have you thought of a place to go? Are you considering Spring, Texas? This article will guide you in deciding which neighborhoods are the best for starting families, young professionals, and seniors in terms of amenities, proximity to shopping, dining, and entertainment centers, school district zones, and medical accessibility.

Grand Central Park | A Master Planned Community in Conroe TexasJennifer Yoingco. Grand Central Park Conroe - a Master planned community in Conroe, Texas. Some people tend to become nostalgic whenever they pass the expansive stretch of land along the west side of the North Freeway near Loop 336. And who wouldn't? That 2,046-acre nostalgia-filled landscape was once home to one of the largest Boy Scout camping sites in the United States - Camp Strake, known for more than 70 years as the flagship camp of the Sam Houston Area Council. The pristine wilderness of this beloved Boy Scout camp has been home to generations of young boys every summer, where they learned the foundation of leadership and camaraderie.