Why do these 2000-year-old mummies in Egypt have golden tongues? 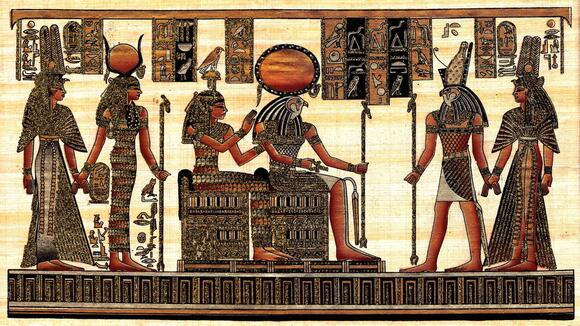 Archaeologists in Egypt recently discovered several mummies with gold chips shaped like a human tongue placed in their mouths.

According to Egypt's Ministry of Tourism and Antiquities, the mummies were found in the city of Quesna, which is about 35 miles north of Cairo.

In addition to the mummies with golden tongues, gold-shaped scarabs and lotus flowers were found buried nearby.

It's not the first time Egyptian mummies were found with gold tongues. LiveScience reports giving mummies gold tongues during the embalming process was popular during the Greco-Roman period, which happened around 332 B.C. to 395 A.D.

Why did the mummies have gold tongues?

Experts don't believe that the Egyptians had gold tongues in life. They think the tongues were cut out during the mummification process and replaced with a tongue-shaped gold chip.

According to LiveScience, the Egyptians also sometimes gave mummies golden eyes in addition to tongues. The gold eyes and tongues were meant to help the deceased to be able to speak, see, and taste in the afterlife.

Gold was sacred to Egyptians

Egyptians highly valued gold and used it for coffins, funerary masks, accessories, furniture, and in trade with other nations. Gold was linked to the Egyptian Sun God Ra, and Egyptians may have believed it to be "the flesh of the gods" because it didn't become discolored.

To get NewsBreak stories delivered for FREE on your phone, download the NewsBreak App. If you use my link, I get a small commission (at no cost to you.)

Will the fast food chain famous for biscuits and thickburgers open a location in Chicago?

In the South and Midwest, Hardees is beloved for its homemade biscuits and iconic thick Angus burgers. Eater Chicago reported a Hardee's fast food restaurant may open soon at 736 W. Division Street. Attached to the Exxon gas station, it would be the only Hardee's in Chicago.

This Tuesday, Old Navy on State Street closed its doors for good. (CHICAGO) When I used to work downtown, I liked to exercise in the mornings at a gym across the street from my office. One morning I realized with horror that I had forgotten to pack a work skirt. All I had were my workout shorts.

It will be only the third Ramsay's Kitchen in the U.S., with the two other locations in Las Vegas and Boston. (CHICAGO) If you're yearning to try celebrity chef Gordon Ramsay's world-famous British specialties such as beef Wellington or sticky toffee pudding, you're in luck. Ramsay is bringing his Ramsay's Kitchen restaurant to the western Chicago suburb of Naperville this spring.

Chocolate depression cake recipe: (No eggs, no butter, no milk)

The idea for this vegan cake can be traced back to the Great Depression when traditional cake ingredients were hard to come by. I first tried this recipe during the early days of lockdown, back in 2020, on a day that I was stuck at home wanting to bake something, but entirely out of eggs.

In honor of Lunar New Year, here are the 10 best Chinese restaurants in Chicago (according to Yelp)

The Chinese New Year celebration for 2023 lasts from Friday, January 22nd through February 5th. (CHICAGO) It's time to ring in the Year of the Rabbit. Chicago goes all out with the Lunar New Year celebration, from parades to music to special events and fantastic food.

Stan's traditional old-fashioned donut (made with buttermilk and sour cream) pairs with caramel glaze and coarse sea salt. (CHICAGO) The sweet and salty combination of caramel and salt is a flavor trend that has not waned in popularity over the past 10 to 15 years. According to The New York Times, salted caramel became a thing back in 2008.

From Benny the Bull-izzard to B.B. Plow King, city gets creative with snowplow naming contest

Vote for your favorite name for your neighborhood snowplow now through Jan. 31st. (CHICAGO) The idea for naming snowplows in the U.S. began in Minnesota. It was in 2020, during that first winter of the pandemic when it seemed the entire world was locked down, and the Minnesota Department of Transportation (MnDOT) wanted to connect with Minnesota residents in a light-hearted way.

Does your hotel room have bed bugs? Here's how to check

Chicago ranked first on Orkin's 2023 Bed Bug Cities List. (CHICAGO) If you're staying in a hotel in Chicago, you may want to check first for bed bugs. That's because Chicago topped Orkin's list of cities with the most bed bugs for the third year in a row.

Your guide to Chicago's winter dining event that includes over 335 restaurants across Chicagoland. (CHICAGO) For the 16th year in a row, Chicago restaurants are offering special menus at fixed prices to lure diners into going out to eat during the cold winter months.

Why are egg prices so high in the Midwest? Will the cost come down soon?

Here's why you may be experiencing sticker shock at the grocery store when you go to buy a dozen eggs. (CHICAGO) Although inflation has been slowing, a recent trip to the grocery store showed me egg prices are still at an all-time high.

Portillo's is about to make a big change to drive-thru ordering. (CHICAGO) Anyone who has waited in the drive-thru line during lunch to pick up an Italian beef sandwich, chopped salad, or Chicago dog from Portillo's knows how insanely long the lines can get.

Check out the many flavors including, a chicken salad sandwich with Buffalo sauce, ranch, bacon, shredded cheddar cheese, jalapeños, and Sriracha. (CHICAGO) You may not consider the humble chicken salad to be so versatile, but the Southern franchise, Chicken Salad Chick, has built its success on serving chicken salad in an abundance of ways.

It's easy to make, high in protein, full of nutrients, and most importantly, it's delicious. This Mediterranean quinoa salad is essentially a Greek salad with quinoa and chickpeas thrown in for protein, making it a complete meal. You can prepare it ahead and pack it for lunch or serve it as a side with dinner.

Celebrate Valentine's Day 103 floors up with Skydeck Chicago's annual social media contest. Enter the contest on Facebook or Instagram for your chance to get married or renew your vows in a very unique, and very Chicago, experience.

The TikTok famous store with the 'Vitamin Vault' is closing for good. Ceiling detail at WalgreensPhoto byDaniel X. O'Neil/Flickr.com. (CHICAGO) It was only a rumor until the company confirmed the iconic Walgreens in Chicago's Wicker Park neighborhood that sits in a former old bank building will be permanently closed next month.

(CHICAGO) Worms on the sidewalk, Portillos, and May's blood moon are just some of the most viewed/read stories that I wrote this year. It's the end of one year, and the beginning of the next, which means, year-end lists are everywhere. I thought it would be fun to see which articles I wrote over 2022 that readers tended to click on the most.