Because sometimes you need a break from the news

(CHICAGO) You may have missed National Popcorn Day this past Wednesday, January 19th. But zookeepers at the Brookfield Zoo remembered to celebrate. And they did so by letting popcorn rain down on the western lowland gorillas.

The Brookfield Zoo, about a 20-minute drive from Chicago in the suburb of Brookfield, is open daily from 10 AM to 5 PM.

Throughout the day on Wednesday, popcorn burst out of timed feeders (part of the zoo's enrichment program) located in the gorilla's habitat in the Tropic World: Africa building. The gorillas watched the popcorn shower down around them and spent the day foraging for it.

According to a press release, offering treats to the animals, such as popcorn, provides enrichment for the animals by encouraging them to forage for their food.

And lucky for us, the zoo got video of the event, which they posted on their Twitter feed.

Here is Kamba, a western lowland gorilla watching the popcorn as it showers down on her from the feeder as she tries to catch it in her hands. 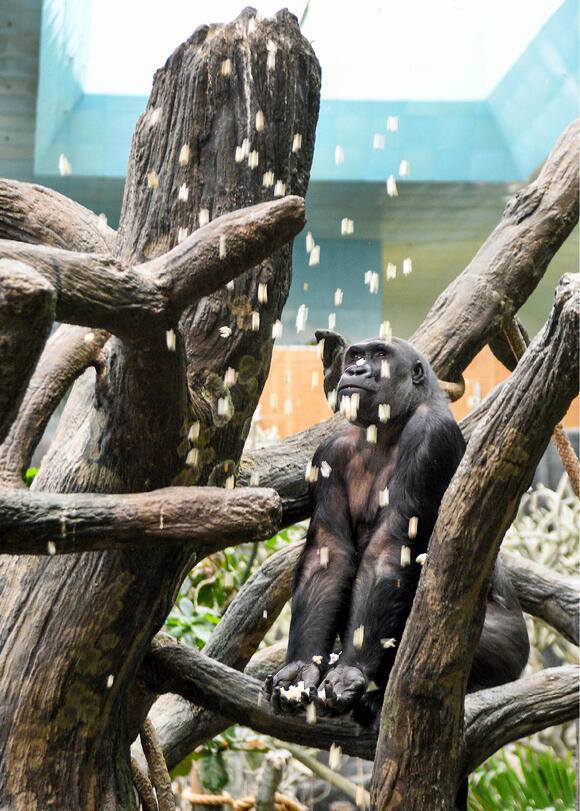 Other animals that joined the popcorn party include two lowland tapirs (Sonny and Sorghum) and a Polish chicken, Imelda. Rest assured, the zoo only gave the air-popped popcorn to the animals that could safely eat it. 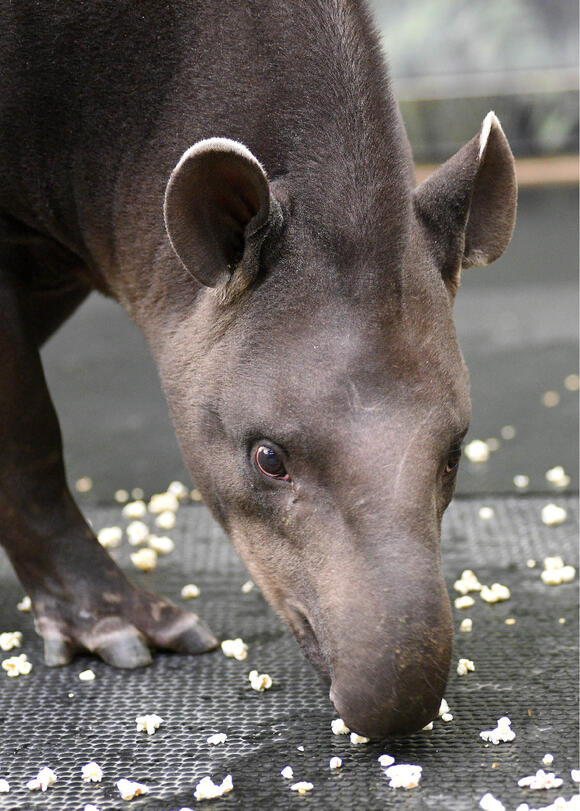 Here is Imelda, the Polish chicken pecking at her popcorn. Although she appears to be more excited over a mealworm she discovered at the bottom of the pile.

The U.S. is the top producer of popcorn in the world. Americans eat 13 billion quarts of popped corn per year, and it's the official snack of Illinois. Illinois is also one of the top-producing states in the nation.

How about at home? Can pets eat popcorn?

Zoo animals aren't the only ones that can enjoy an occasional popcorn treat. Cats and dogs can eat popcorn providing it is only popcorn. It must not contain any salt, butter, or oil.

The high fats from butter and oils can lead to intestinal issues in both cats and dogs, so make sure if you share your popcorn with your furry friend, it's air-popped. And take care with unpopped kernels, they can get stuck in teeth or cause choking hazards.

Want NewsBreak stories delivered directly to your phone? Download the NewsBreak App here. (Full disclosure: I do get a small commission if you click my referral links.)

10 summery things to do this Memorial Day weekend in Chicago

Check out these ideas for a fun-filled three-day weekend. Lakefront BikingPhoto Credit: Abel Arciniega courtesy of Choose Chicago. (CHICAGO) For the last two years, the celebration for the kick-off weekend into summer where we honor those who have died serving in the U.S. armed forces has been subdued. But this year, the city is open with no restrictions.

Gov. Pritzker hits back on Twitter against Texas governor after Abbott slammed Chicago

"Do better. You have 19 kids and two teachers who deserve our best." (CHICAGO) Chicago keeps getting mentioned by politicians amid the tragedy in Uvalde, Texas. They cite Chicago crime as the reason why tougher firearms restrictions won't work.

Unfair laws and prejudice nearly wiped out Chinese restaurants in Chicago 100 years ago. China Town in ChicagoAdam Alexander courtesy of Choose Chicago. (CHICAGO) As popular as Chinese food has become in America, there was once a time in our history when Chinese-American restaurants were under attack.

A recent survey from Cars.com found that 82% of Americans traveling over Memorial Day will choose to drive to their destinations. Many will carpool or drive an electric car to help save money.

Hear all the details of the 'Grow Solar Chicagoland' group-buy program in a Facebook Live event held this Wednesday, May 25th. (CHICAGO) With inflation rising everywhere on seemingly every product and service, Chicagoans are looking to save money where they can. One of those places you might be able to save a buck could be in your electric bill. However, according to the nonprofit Illinois Public Interest Research Group (Illinois PIRG), electric bills in Chicagoland are likely only to get worse. ComEd is proposing a $199 million rate hike starting next year.

Friday, May 27th, is National Italian Beef Day, and Buona Beef is giving away free sandwiches via their app. (Image by The Buona Companies, CC BY-SA 4.0, via Wikimedia Commons)

And here's what I thought. Portillo's(image by Leonard J. DeFrancisci, CC BY-SA 3.0, via Wikimedia Commons - cropped) (CHICAGO) Vegans with a craving for a Chicago-style hot dog can rejoice. Portillo's has teamed up with Field Roast to offer a vegan hot dog made with 100% plant-based protein and served in the traditional Chicago-style way.

Is climate change bringing armadillos into northern Illinois?. (CHICAGO) They don't seem to be here yet, but according to officials from the Illinois Department of Natural Resources (DNR), armadillos might be making their way north from the southern part of the state.

Don your finest gown and get ready for the social event of the year. The Queen's Ball: A Bridgerton Experience has arrived in Chicago!. (CHICAGO) If you have ever imagined yourself as a lady or lord of The Ton, dressed in your finery, sipping cocktails, and hobnobbing with the Queen as an elegant string quartet plays in the background, your time is now.

The Aurora City Council voted last week to fine pet owners a $100 ticket for excessive noise from dog barking. (CHICAGO) Nobody likes to hear a dog barking excessively outdoors, but this Chicago suburb is taking it to another level.

What to do this weekend in Chicago: See the 'Blood Moon' at a lunar eclipse viewing event

In the Chicago Metro area, prices this past March were up 7.8% from a year ago, according to the Consumer Price Index. (CHICAGO) If you've noticed your household bills are up lately, you're not alone. Everything seems to cost more these days. And Americans are struggling to pay for it all, according to the latest report from QuoteWizard, a LendingTree company.

Bring your dog to The Morton Arboretum this Sunday, May 15th

As long as the weather cooperates, Chicagoans will have a perfect view of May's Blood Moon/Flower Moon during the eclipse in May. (CHICAGO) If the clouds stay away, sky observing enthusiasts could be in for a treat this month. For the first time in three years, northern Illinois, including the Chicago area, will be able to view a total lunar eclipse on Sunday, May 15th.

What's the deal with all the gnats, Chicago?

Your answers on how to repel them, and do we know why there are so many this year?. (CHICAGO) Social media has been abuzz with reports of gnat swarms in Chicago, especially near the lakefront. One Twitter user posted, "I'm abandoning Chicago the gnats have won."

Mayor Lori Lightfoot launches a campaign to promote Chicago's high-quality drinking water. However, the city is still dealing with dangerous lead pipes, and what's the taxpayer's cost of the new campaign?

Politicians in Illinois and Chicago reacted to the leaked news of the possibility of the overturning of Roe v. Wade. (CHICAGO) A draft opinion obtained by Politico and leaked Monday night showed earlier this year that the Supreme Court justices had voted in a draft opinion to overturn the 1973 Roe v. Wade case that made abortion safe and legal in all 50 states.

The Garden is celebrating its special birthday with art, interactive performances, and a special exhibit in the Greenhouse Galleries. The RookeryPhoto by Patrick Dougherty courtesy Chicago Botanic Garden.

Bird flu warning: Illinois residents advised to stop the use of bird feeders and baths

Officials hope to limit the spread of avian flu among wild and domestic birds. (CHICAGO) In upsetting news for backyard bird watchers and bird enthusiasts, the Illinois Department of Natural Resources (IDNR) has issued a warning to all Illinois residents.

The french fries were "still perfectly crispy." McDonald's museum, Des Plaines, IL(photo by Bruce Marlin, CC BY-SA 2.5, via Wikimedia Commons) (CHICAGO) People have been known to make strange discoveries when doing home renovations, as this Crystal Lake couple recently found out. Rob and Grace Jones made an unusual find while upgrading the bathroom of their 1950's era home in the northern suburbs of Chicago.