Jeff is an award-winning freelance journalist covering news, business, science and the arts. His work has been published in Discover Magazine, Vice, the Phoenix New Times and other outlets. 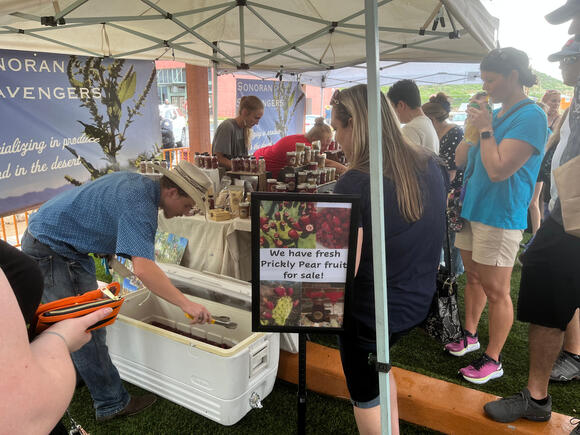 (Superior, AZ) Despite monsoon thunderheads threatening from atop the steep rock walls to the east, below in Superior, the 11th annual Prickly Pear Festival stayed dry and saw a strong turnout, with visitors taking advantage of the day’s unseasonably cool temperature of 82 degrees.

A nonprofit working to revive the local environment and economy, Regenerating Sonora runs the festival. The group hosted speakers discussing Linking Ecosystem and Hardware for Regeneration (LEHR) gardens, mesquite foraging, and Earthship construction at the Superior Chamber of Commerce.

"We want this event to evolve and expand toward that type of community that is interested in sustainability, edible deserts, and homeopathics,” said Pete Casillas, the festival’s event coordinator. “It's brought in some good ideas and like-minded people together, so we want to keep that going and then expand on that."

Though the festival generally went off without a hitch, a prickly pear foraging party typically hosted in the morning had to be canceled due to a poor harvest.

To try and figure out why the formerly fecund fruit was in short supply, Casillas approached the nearby Boyce Thompson Arboretum, which also hosted events in conjunction with the festival.

“I talked to one of the botanists there at the arboretum about this because we typically start foraging the prickly pears a month in advance, and there have been literally no prickly pears at all,” Casillas said. “He couldn't explain it either. Maybe something to do with the microclimate issue that resulted in a poor harvest, but he really can't pinpoint that direct reason.”

Whatever the cause, other nearby communities like Kearney, Hayden, Winkelman, Globe, and Miami still had adequate harvests and were able to supply Superior, ensuring the botanical celebration could go on.

Thus, vendors in outdoor and indoor markets could still sell an array of goods, many made from prickly pears, mesquite beans, wolfberries, and other desert plants.

In the evening, a group of local women held a desert dining experience featuring food foraged from cacti, shrubs, and other wild edibles.

An array of drinks made from the festival’s titular desert produce were also available, both spiked and virgin, including lemonade, tea, wine spritzers, margaritas, and martinis.

Music, folklorico dancers, and other entertainment options rounded out the busy day’s activities.

Eleven years ago, Paul Wolterbeek, who works at the Boyce Thompson Arboretum, came up with the idea for the festival to celebrate the ripening of prickly pears and attract visitors to the small town of Superior during its typically hot off season.

Then President of the Superior Chamber of Commerce, Casillas jumped at the opportunity.

“We are reliant on a lot of the snowbirds that come in during the winter months, so it's hard around the summertime to bring in those numbers,” Casillas said. “I loved the idea, and we went for it. We had a $250 budget, and we made it happen. We had over 1,000 people show up at our very first event, which was a huge success.”

Those are big numbers for a community with a population of 2,321, according to the 2020 U.S. Census.

Regenerating Sonora assumed responsibility for the event in 2019 and has run it since.

Jeff is an award-winning freelance journalist covering news, business, science and the arts. His work has been published in Discover Magazine, Vice, the Phoenix New Times and other outlets.

A map of proposed transit improvements.(Pinal Regional Transportation Authority) (Pinal County, AZ) From miles-long backups on SR-347 to the lack of public transportation options, getting around largely rural Pinal County can be difficult at times if not almost impossible – even if your vehicle has a siren and flashing lights.

A brave festival attendee faces off with a Dino Crew Entertainment performer.(Jeff Kronenfeld) (Eloy, AZ) More than two centuries after the Cry of Dolores signaled the beginning of Mexico’s War of Independence, Eloy’s annual celebration of that fateful day, the Fiestas Patrias, filled the town’s Central Park with music, laughter, and even a dinosaur’s roars.

The historic former Superior High School.(Arlynn Godinez/Superior Enterprise Center) (Superior, AZ) The Copper Corridor’s future looks a little brighter after residents of Superior got a first peek at their multigenerational center last night – one of the most notable examples of how a historic Arizona mining town is trying to combat population declines.

Water bottles and other drinks for distribution by the Pinal County Heat Relief Network.(Braden Biggs) (Pinal County, AZ) As a scorching heatwave baked much of Arizona over the last week, Pinal County offered sweaty residents some respite through heat refuges and hydration stations – even as many groups are still not able to offer the level of assistance they did prior to the pandemic. .

A Nikola truck drives by the U.S. Capitol.(Nikola Corporation) (Pinal County, AZ) Like a truck rolling downhill, Phoenix-based electric and fuel cell vehicle manufacturer Nikola saw its stock price drop by 3.98% Tuesday -- down 48.74% since the beginning of the year.

A rendering of the PHX Surf water park in the city of Maricopa.(PHX Surf/AO) (Maricopa, AZ) As Pinal County farmers struggle to cope with the recently extended cut-off of Colorado River water, others in the region have responded to the historic drought more leisurely.

What to do about Sonoran Desert toads emerging from hibernation

A tent containing a pair of relocated burrowing owls and an artificial burrow setup by Wild at Heart.(Arizona Wildlife Resource ) (Pinal County, AZ) Last month, Valerie Motyka’s organization, Arizona Wildlife Resource (AWR), received a call that burrowing owls near a construction site in San Tan were in trouble. From AWR’s headquarters in Eloy, she reached out to the landowner.

A screenshot from SIMOC.(Over the Sun) (Oracle, AZ) The Arizona-based company Over the Sun, LLC, has developed software for simulating off-world habitats, which it continues to improve and find new uses for on Earth.

Dana Lewis is sworn into office by Clerk of the Board Natasha Kennedy.(Pinal County Communications and Marketing) (Florence, AZ) Air Force vet Dana Lewis was unanimously appointed by the Pinal County Board of Directors as the county’s new recorder today, a day after her former boss stepped down before being named Election Director.

Could water wars in other parts of Arizona spill over into Pinal County?

Sue Parra, co-owner of Sue and Jerry’s Trading Post.(Jeff Kronenfeld) (Oracle, AZ) Sue Parra, a miner’s daughter, has called Oracle home since 1970. She has seen the small community’s fortunes rise and fall with the flow of copper and other minerals from the San Manuel Mine, once North America’s largest underground mining operation.

An image of Dungeons and Dragons characters battling a dragon.(Wizards of the Coast) (Casa Grande, AZ) The druid, rogue elf, bulky barbarian, even bulkier eight-foot-tall cleric, and other adventurers have been battling undead monsters for nearly a half-hour. Then, finally, the druid Alesa’s eyes glow red, and the remaining vampire spawn flee, only to be incinerated as a wall of flames explodes from the earth.

High Commissioner Filippo Grandi visits the destroyed home of Liudmyla, 65, in Makariv in the Bucha district of Kyiv Oblast(Andrew McConnell/UNHCR) (Pinal County, AZ) No place is immune to the fallout from the Russian invasion of Ukraine, including Pinal County.

Thick-billed parrots on a branch.(OVIS) (Pinal County, AZ) Arizona was once home to one of two parrot species occurring naturally in the contiguous U.S. Though the last known Carolina parakeet died in 1918, thick-billed parrots live on in Mexico, some tantalizingly close to the Arizona border.