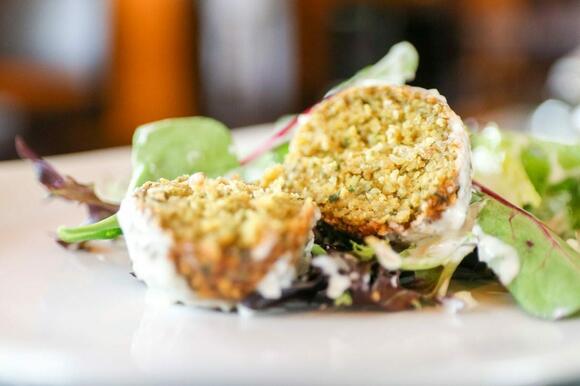 Breanna and Quique met in New York City in 2010 in a restaurant that they both worked in; they soon became friends and later married. They shared many interests, one being a love of good food and a dream of one day owning a restaurant together. When their son Oliver came along, they felt their tiny New York apartment wasn’t the right fit for them anymore. So, they decided to move to Breanna’s hometown of Murray.  Shortly after, they became aware that the local international restaurant “Gloria’s” was for sale.  Jumping at the opportunity, they excitedly purchased the unique eatery – now affectionally know as The Willow Bistro.

The restaurant is housed in a gorgeous circa-1929 home built by Price “Pop” Doyle, a familiar name in Murray. Doyle is the namesake of the Price Doyle Fine Arts Center on Murray State’s campus.

Home to Murray State University, Murray was named the Friendliest Small Town in America by Rand McNally and USA Today. The enchantment of the small, southern town is abundantly clear. Smiles, big hearts, and impressionable interactions are aplenty; locally-owned boutiques and restaurants dominate the local economy; and the charm is tangible. Visit Murray to experience arts + culture, one of Kentucky’s premiere farmers markets, and a community unlike any other in the Commonwealth. It’ll feel like home.

Looking for a summertime activity? Look no further than the Jeffersontown Summer Craft Beer Fest to choose from more than 85+ craft beers, wines, and seltzers to wet your palate. In its 7th year, this event returns to the beloved J-Town Gaslight Pavilion and 3rd Turn’s Kentucky Corner, plus the expanded footprint including Neal Drive.

The Sixth Annual Taste of Independents

Hey, y'all! Love the Louisville food scene? In all honesty... who doesn't? If you've ever wanted to sample offerings from a multitude of restaurants in the same space, I have the perfect event for you: the Sixth Annual Taste of Independents!

Louisville will welcome the world’s largest industry association for meeting and event professionals in 2025 with the hosting of the Meeting Professional International’s (MPI) World Education Congress (WEC), scheduled for June 10-12, 2025. This marks the first time in more than a decade that WEC will return to the southeastern U.S. and the first time Louisville is a host city.

Many associate Churchill Downs, Kentucky’s famed racetrack, with the beauty of thoroughbred racing. While that’s certainly true, I would argue that Churchill Downs is not just a destination, it’s a community. A community of horse fans, workers, and aficionados; a place that boasts traditional community roots: food, excitement, work, and even spirituality. Today I have the privilege of telling you more about the spirituality of the track + the transforming of lives at Churchill Downs via the Kentucky Race Track Chaplaincy.

Hey, y’all! I’m excited to share this interview with Tisha Gainey, a Kentucky Craft Beer Champion and one of the masterminds behind one of Kentucky’s most beloved festivals: the Tailspin Ale Fest. You can learn more about Tailspin here.

Hey, y’all! The Commonwealth of Kentucky is chock-full of delicious restaurants – and I’m on a mission to try them all. I recently tried Marcella’s Farm to Fork, which is located in Mt. Vernon. The food was incredible + I am excited to tell y’all more about my experience today!