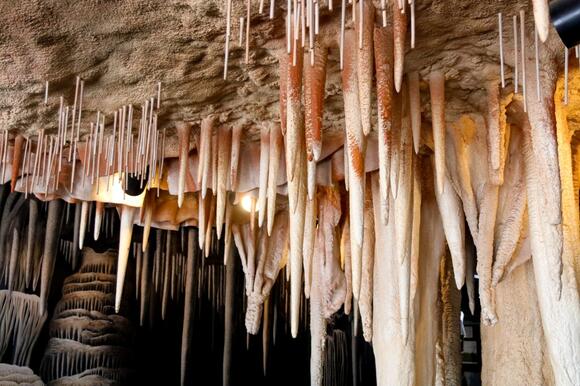 No visit to Kentucky Cave Country is complete without an in-depth look at the fascinating world of caves. The American Cave Museum provides fun, educational, and informative exhibits that help visitors from around the world discover the history and understand the science behind America’s natural caverns. The American Cave Museum is the only museum devoted solely to caves in the United States; an experience that’s only to be had in Hart County!

What You’ll Learn About In The Museum

Accessibility: The American Cave Museum and the Hidden River Cave sinkhole are handicap accessible. However, the descent into the cave travels down approximately 230 stairs to a landing. There are additional stairs to the bridge and up into Sunset Dome.

Hidden River Cave is an 8-mile labyrinth dissolved by a subterranean river flowing beneath the historic small town of Horse Cave. In 1867, famed naturalist John Muir called this cave “a noble gateway to the birthplace of springs and fountains and the dark treasures of the mineral kingdom.” You might also recognize it from the Discovery Channel Series “Dirty Jobs”! Offerings include:

Hart County, located in South Central Kentucky, lies predominately within the central portion of the Pennyroyal region of the state. Nolin River forms the western boundary of the county and the Green River winds through the center. Hart County contains five of Kentucky’s ten largest springs, including Gorin Mill Spring, the largest in the state. Further, they are home to world-famous Hidden River Cave, part of Mammoth Cave National Park, Kentucky Down Under, and an award-winning trail system.

Louisville will welcome the world’s largest industry association for meeting and event professionals in 2025 with the hosting of the Meeting Professional International’s (MPI) World Education Congress (WEC), scheduled for June 10-12, 2025. This marks the first time in more than a decade that WEC will return to the southeastern U.S. and the first time Louisville is a host city.

Many associate Churchill Downs, Kentucky’s famed racetrack, with the beauty of thoroughbred racing. While that’s certainly true, I would argue that Churchill Downs is not just a destination, it’s a community. A community of horse fans, workers, and aficionados; a place that boasts traditional community roots: food, excitement, work, and even spirituality. Today I have the privilege of telling you more about the spirituality of the track + the transforming of lives at Churchill Downs via the Kentucky Race Track Chaplaincy.

Hey, y’all! I’m excited to share this interview with Tisha Gainey, a Kentucky Craft Beer Champion and one of the masterminds behind one of Kentucky’s most beloved festivals: the Tailspin Ale Fest. You can learn more about Tailspin here.

Hey, y’all! The Commonwealth of Kentucky is chock-full of delicious restaurants – and I’m on a mission to try them all. I recently tried Marcella’s Farm to Fork, which is located in Mt. Vernon. The food was incredible + I am excited to tell y’all more about my experience today!

The regional premiere of the movie-turned-musical will open January 7; 1501 Story Ave. (formerly LetterSong) is Time Slip's new home. Time Slip Theatre, a 501(c)(3) theatre company that launched in Louisville in July 2021, is proud to debut its second mainstage musical and simultaneously open its new rehearsal space.