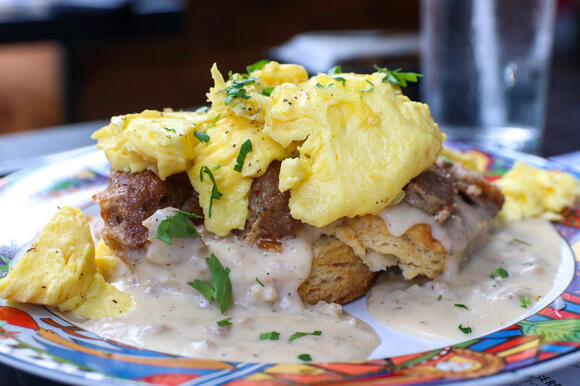 Hey, y’all! There are few things that I love more than experiencing a new restaurant. While there are still a few restaurants that are new-to-me in the city, that list is becoming smaller and smaller. That said, I was elated to try CC’s Low Carb Kitchen in Downtown Louisville last weekend. The best part? While the food and drinks were delicious, we got to enjoy them with an intimate, entertaining drag show — one of the best that I’ve been to in years!

Low carb food often gets a bad reputation and CC’s aims to fight that notion. Their meals do not rely solely on cauliflower or zoodles — both of which I love, though both of which are over-represented. The from-scratch menu at CC’s features traditional, low carb pastas, breads, rolls, flatbreads, and elevated comfort foods.

To start off your brunch, you must order one of their Bloody Mary’s — some of which are spectacles for the eye! The Big Dick features a 12″ sausage and olives, The By The Sea features shrimp and Old Bay Seasoning, the Bacon Bloody features candied bacon, while the Big Ass Bloody is the true wonder: a chicken wing, 12″ sausage, cheese, olives, shrimp, and other trimmings of the chef’s choice.

For my main course, I had the Rueben, which was absolutely delicious: house-made bread, slow-roasted corned beef, kraut, Corey’s sauce, and cheese. Seriously… mouthwatering.

I also had the opportunity to try the CC’s Big Ass Biscuits & Gravy: a “big ass biscuit”, Jake’s sausage gravy, an egg, and your meat of choice.

Other menu highlights include: chicken and waffles, stuffed french toast, breakfast tacos, and the pimento cheese hushpuppies. I’m excited to go back to try them!

I mentioned that the drag show was extraordinary, as it was the Red Carpet Brunch. The cast included local favorites Tova Ura Vitch (a fabulous hostess and emcee) and male-illusionist TB Sparrow, along with some of the nation’s top female illusionists: Andora Tetee, Tiffany Bonet, and Savannah Stevens.

Tova kicked off the show with a fast-paced number, followed by her Liza Minnelli impersonation.

Tiffany Bonet started with Tina and rocked my soul with Aretha Franklin (my favorite diva).

Last, but not least, Savannah performed as both Reba and Shania.

The best part of the show? CC’s has a strong commitment to charity. This month’s charity is the House of Ruth, with a new charity to be announced on a monthly basis. I appreciate their commitment to both funding and uplifting the community!

Want to attend a drag brunch? Shows are at 11, 1, and 3 on Sundays. You can order your tickets here.

How Many Bourbon Barrels Are Aging In Kentucky? Number + Industry Taxes Growing

How many Bourbon Barrels Are Aging In Kentucky? The Kentucky Distillers’ Association (KDA) recently announced that for the first time in the modern era of American whiskey, Kentucky has 10 million barrels of bourbon aging in distillery warehouses across the Commonwealth.

A One Ounce Pour of Bourbon for $600? Only In Kentucky!

In Kentucky, we make record-breaking sales in two industries: bourbon and horses. However, the most recent sale of Van Winkle Family Reserve 15-yr sets the bar higher than ever before.

Hey, y’all! If you’re a regular here on the blog, you know that Shelby County, Kentucky is one of my – if not my – favorite communities in the Commonwealth. It’s chock-full of southern charm and hospitality, boasts great shopping, and is perfectly situated between Louisville and Lexington. On my recent trip to Simpsonville, I discovered my new favorite spot in town and I’m tickled pink to share it with y’all today: Little Mount Lavender. I know y’all are going to love it!

Mums, Pumpkins, And All Things Fall In Kentucky

Hey, y’all! While (in my completely biased opinion) all seasons are lovely in the Commonwealth of Kentucky, there’s something special about Autumn. The colors in the trees, a crisp breeze in the air, the sight of locally-grown pumpkins and mums. I love it. There are many fabulous places to celebrate fall this year, but I’m excited to share how to best Celebrate Fall In Hart County, Kentucky with y’all today: a visit to Dennison’s Roadside Market!

Hey, y’all! Pimento cheese is sometimes referred to as the “pâté of the south” and/or the “caviar of the south”. While it is certainly both of those things, it is also – simply put – my favorite food. As such, I’m excited to share Kentucky's Best New-to-Market Pimento Cheese (and the creator) with you today.

Last week, I had the chance to attend the final Wine Dinner Series of the summer at Swizzle in Louisville, Kentucky. It was a wonderful dining experience from start to end – each course was expertly-curated and paired with delicious wine. I want to commend the kitchen and the organizers of the event for top-notch execution. I’m hoping they bring back the series next summer; that said, get excited: they are launching a Bourbon Dinner Series in the fall (but more on that later). To understate: the Wine Dinner Series at Swizzle was a night to remember!

Louisville has, undeniably, one of the best food scenes in the region — and certainly the highest-acclaimed in the Commonwealth of Kentucky. However, there’s one thing that I think we’ve always missed the mark on: late night dining. I say this largely due to the fact that the city has a nocturnal culture, with many institutions open until 4 AM. Whether you are looking for a late night bite, or a meal at a more common hour, I’m excited to introduce y’all today to your new go-to spot: Lucky Leopard Pizza. I’m already planning my return visit!

Dinner and a Murder Mystery: Dine and Investigate This Week At The Kentucky Castle

Enjoy dinner and entertainment this week at one of Kentucky's most beautiful properties: the Kentucky Castle!. While delicious food is to be expected at the Castle, don't get too comfy during this experience. Why? While dining, Murder and Merriment - the Castle's Murder Mystery Dinner Theater Team - will submerge you in a story and leave you saying "Who Did It?"

TNT - Paducah Prepares To Rock Out At Touchdowns and Tunes Tailgate Party. Entering its 4th year, TNT has grown exponentially and shows no signs of slowing down. Featuring two stages with over 25 artists, multiple attendee experience zones, and oversized LED screens throughout the grounds displaying college football games, Touchdowns and Tunes Tailgate Party truly has something for everyone!

Get Ready For This Year's Abbey Road On The River

Immerse Yourself In The Arts: Time Slip Theatre Launches in Louisville with "Murder Ballad"

The arts scene in Bourbon City is profound and ever-growing. The newest addition? Time Slip Theatre!. Immerse Yourself In The Arts: Time Slip Theatre Launches in Louisville. “We are so excited to be here and be a part of this vibrant and rich arts scene of Louisville,” said Board President Michael Detmer. “Time Slip is going to do amazing things – whether it be creating exciting and engaging productions or working with students after school. There are so many great things on the horizon, and we’re exceedingly grateful for the support we’ve already received.”

Many of our beloved businesses in Louisville give back - a recent example is Emmy Squared, a popular spot for pizza in NuLu. Popular NuLu Pizza Restaurant Joins Company-Wide School Supply Drive.

A Baby Wildebeest Born In Kentucky? See For Yourself at Dutch Country Safari Park in Horse Cave!

A Baby Wildebeest Born In Kentucky? See For Yourself at Dutch Country Safari Park in Horse Cave!. Yes, you read that headline correctly. There's a new baby in the Commonwealth - and it's a baby Wildebeest!

Party Like Gatsby On The Belle of Louisville: The Roaring Twenties Sunset Cruise

Turn back the clock to the Roaring 20s aboard the 106-year-old Belle of Louisville! Grab your best suit or flapper dress and dance the night away to the greatest jazz, blues, and ragtime songs of the decade with entertainment from Billy Goat Strut Revue and Rannygazoo. Enjoy a complimentary glass of champagne and toast to good times!

Pimento cheese is sometimes referred to as the "pâté of the south" and/or the "caviar of the South". While it is certainly both of those things, it is also - simply put - my favorite food. As such, I'm excited to share the most popular dish that comes out of my kitchen (hands down!) with you today: my Southern Pimento Cheese Recipe! I always joke that it's "Better Than MeeMaw's" -- but don't tell her that... she'll be awfully offended!

Hey, y’all! From cabins on Lake Cumberland, to the historic hotels of Downtown Louisville, to staying in Horse Country near Lexington and Central Kentucky — the Commonwealth is chock-full of lodging options. However, I know this to be fact: not all lodging is created equal. Looking for your next adventure?