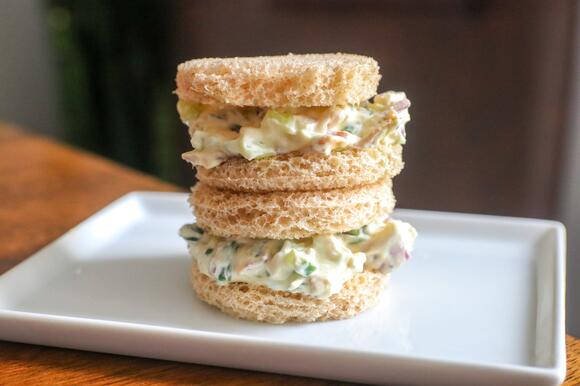 Benedictine is a Kentucky legacy and a southern staple; it also happens to be one of my very favorite foods. As such, I’m thrilled to be sharing the recipe for my Bacon and Benedictine Tea Sandwiches with y’all today! Perfect to eat all summer long, this is a wonderful appetizer to serve poolside or at any party. That said, there’s no better party to serve it at than a Kentucky Derby Party & I do hope that you will place it on your menu!

JC’s note: Many recipes, mine included, call for green food coloring. Please note that this is completely optional. Benedictine is traditionally known to be a green spread; however, the cucumbers are not enough to color the batch. I only add 3 drops of food coloring, as I don’t want it to look unnatural. That said, use your own discretion.

Miss Jennie Benedict invented her savory spread – now known as Benedictine – in a one-room kitchen around the turn of the 20th century. She famously served it to Louisville high society and workers alike and it became her namesake years later.

Benedictine, though created in Louisville, is popular around the state and is most commonly served at garden parties, bridal showers, and Derby Parties. If you’re hosting a meal in the Commonwealth of Kentucky, it would take nerve to not have Benedictine on the menu!

Benedictine is most popularly prepared as a small tea sandwich; that said, it can also be served with crackers, baguettes, and vegetables. Some people even use it to stuff potatoes!

No matter how you serve it, it’s a refreshing dish – and I do hope that you will love my Bacon and Benedictine Tea Sandwiches!

From my Kentucky Kitchen to your plate – enjoy!

Lou Lou is Opening in NuLu

Jared Fox Matthews, a popular St. Matthews restauranteur, is growing his restaurant portfolio to include the ever-popular NuLu neighborhood of Louisville, KY. The owner of Lou Lou Food & Drink is taking over the space left vacant by Decca. Matthews says his goal is to open by mid-Dec or early-January ’23.

“Come Inside the Fences and Experience Bowman”: BowmanFest 2022

Hey, y’all! Are you gearing up for BowmanFest 2022? The event is held on October 1st and 2nd and is extra special this year, as it is celebrating Bowman Field’s 100th anniversary! I recently had the chance to sit down with Pat MacDonald, who serves as the event organizer of BowmanFest – a Louisville event that you will not want to miss!

The Top Seven Things To Do In Murray, Kentucky

Hey, y’all! There’s nothing better than exploring the communities that make the Commonwealth of Kentucky special. While there are many that I love, Murray is an all-time favorite. Murray, a small college town located in Western Kentucky, boasts an amount of charm you’d expect to see in a movie. It was also voted the Friendliest Town in America! While you’ll never run short of things to do on your visit, here’s my list of the Top Seven Things To Do in Murray, Kentucky.

Dinner and a Show in Shelbyville: Shelby County Community Theatre

Hey, y’all! I have shared over the years that Shelby County is a top-tier destination for saddlebred horses, bourbon, and Kentucky culture. But, I also want y’all to know that it’s a wonderful place to experience the arts, for which we are rich here in the Commonwealth! I recently had a perfect evening – a dinner and a show in Shelbyville – and I’m so excited to tell y’all about it today. To understate, the Shelby County Community Theatre is a regional gem!

The Sixth Annual Taste of Independents

Hey, y'all! Love the Louisville food scene? In all honesty... who doesn't? If you've ever wanted to sample offerings from a multitude of restaurants in the same space, I have the perfect event for you: the Sixth Annual Taste of Independents!

Looking for a summertime activity? Look no further than the Jeffersontown Summer Craft Beer Fest to choose from more than 85+ craft beers, wines, and seltzers to wet your palate. In its 7th year, this event returns to the beloved J-Town Gaslight Pavilion and 3rd Turn’s Kentucky Corner, plus the expanded footprint including Neal Drive.