Jayne is a freelance writer, published poet, and award-winning playwright who specializes in writing human interest stories and anything else that satisfies a multitude of curiosities. 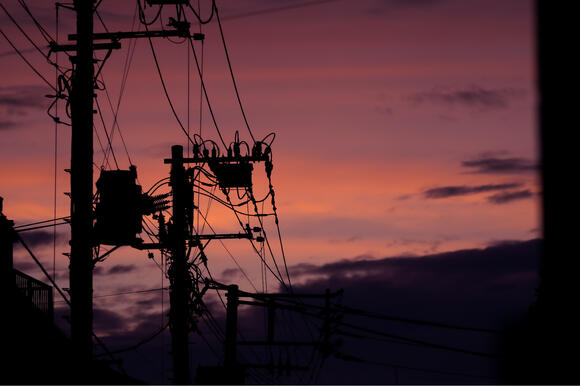 It's rare to experience two power outages within two weeks, but that's exactly what recently in Holyoke. Caused by a period of high demand secondary to extremely cold weather, Holyoke Gas and Electric issued the following statement:

"Outage Update: Power was restored to all customers this morning at 10:23 am, our team appreciates your patience and understanding throughout this unexpected event. We want to take a moment to distinguish this event from an outage that took place on January 8.

Last night’s outage was caused by an electric switch failure within a manhole near the corner of Cabot Street and Beech Street; it impacted approximately 215 customers. A few weeks ago, on Saturday, January 8, there was an underground cable fault in a manhole on Suffolk Street that impacted electric service to 440 customers. While both incidents were caused by components within the electric system, the two situations were very different and unrelated - one was caused by a switch and the other by a wire. The only similarity is that both failures occurred during periods of high demand caused by extreme cold.

It is rare to experience these scenarios within a two-week period and we want customers to know that HG&E consistently takes steps to prevent situations like this from occurring. HG&E's preventative maintenance plan has earned American Public Power Association's (APPA) highest recognition for reliability. As part of this rigorous maintenance plan, all underground electric equipment is inspected every three years so improvements can be made based on the age of various components. Once the incident investigations are complete, HG&E will review the regular maintenance plan and make adjustments accordingly."

Jayne is a freelance writer, published poet, and award-winning playwright who specializes in writing human interest stories and anything else that satisfies a multitude of curiosities.

More from Jayne B. Stearns

The Holyoke Public Library’s Museum Passes program lets cardholder families visit museums and zoos with a discount or free admission. This is thanks to charitable and civic groups, businesses, and thoughtful individuals like Lisi. Lisi, who was a Holyoke city councilor at large for 14 years, said in a recent press release:

The pandemic has created several types of shortages since it first infected our country back in February 2020. The frantic rush to buy paper towels, toilet paper, and other necessary items at the beginning of the virus left many supermarket shelves bare for months. Hand sanitizer was a rare commodity. And you couldn't find an N95 mask anywhere, even if your life depended upon it, and, for some, it did.

The homeless ones. You've seen them around Holyoke, some of them standing in the median strip of high traffic areas, clutching signs, hoping to gain a few cents from drivers as they stop at red lights. You've seen them on High Street and Main. They here in Holyoke, as well as every town in the Commonwealth.

What's eating you? Eating Disorders on the rise among baby boomers

Let's face it. Aging can be a challenge to body image. Although we may feel young and youthful inside, one trip to the mirror can wreck any youthful illusions we may have about aging gracefully without wrinkles and tummy fat. Still, in defiance of the obvious, a Pew Research Center survey confirms that most of us feel at least 10-20 years younger than we are. And a glance at the birthdate on the driver's license only confirms it. Have you recently applied online for any credit cards? Scrolling down through the years to find your birthdate can feel like hours.

To idle your car or not to idle? Any longer than 5 minutes and you could be fined

Because a few days ago, a neighbor, who is disabled and who hires a medical transportation company to take her to her medical appointments, was handed a sticker with the words, "THIS IS A NO IDLING ZONE," as she headed to her transport vehicle which was idling in the street outside her home.

The sometimes nefarious history of the snowman

This past week, heavy winter snowstorms dropped more than 14 inches of snow across the southeast, shutting down our nation's capital, leaving half a million people without electricity and three people dead. Airlines canceled thousands of flights. Vehicles were left stranded in the middle of the road, and parts of Maryland, Virginia, Pennsylvania, and DC were declared states of emergencies. It was the first storm of 2022, and it was a biggie.

TMS: Can this helmet make you happier? It's here in Holyoke

We all want to live as healthy a lifestyle as we can. And we want to be happy as well. The more comfortable our lives, the better. Unfortunately, some of us have issues that we've carried with us from our youth into adulthood, like depression. I'm not referring to periods of sadness we encounter as a response to a disturbing event. These are situational and as soon as the situation changes, so does the sadness or depression associated with it.

Is it a birdhouse? A hut? A mailbox? No, it’s Holyoke’s little free libraries!

From a distance, you’ve probably seen them, those large birdhouse-like structures perched atop a pole, lining some of the streets in Holyoke. Upon closer examination, you see a door, and when you open the door to look inside, you find books; big books, small books, hardcovers, paperbacks, children’s books, and books for adults. You’ll even find some bestsellers inside and out-of-print rarities if you search long enough.

An opinion for the new year

"We must plunge into experience and then reflect on the meaning of it. All reflection and no plunging drives us mad; all plunging and no reflection, and we are brutes." - Goethe.

Raw milk: the other white drink

The pasteurization of milk was developed less than a century due to dairy cows being fed industrial waste while living in confined urban settings. These less than desirable environmental factors made our milk unfit to drink.

There’s nothing like fresh herbs from the garden to make your meals taste better and give them that added flavorful oomph. But you don’t have to wait for warmer weather to have fresh herbs all year round. You don’t need soil, and you don’t need lots of space. All you really need to grow herbs hydroponically is water, a few glass containers, and light.

Holyoke Medical Center's designated COVID-19 Testing site on the main campus of the hospital has been relocated to the Auxiliary Conference Center around toward the back of the facility. Those looking to be tested should follow the posted signage for directions, then call the number listed on the signs from their car when they arrive at the hospital grounds. Please remain in your car until asked to enter the facility to be tested.

Winter may be here and along with it, frozen earth that can't produce the vegetables and other forms of produce we may find at our local Farmer's Markets during the warmer weather. Other products you may find at the markets like organic milk, flowers, homemade bread, jams and jellies, honey, cheeses, maple products, eggs, and locally made foods, seem to disappear as well. So, where do all the Farmer's Markets go when the weather turns cold?

Can you fit four years of trash into a 16-ounce Mason jar? Laura Singer did!

The average Holyoker generates over 4 pounds of trash every day, which, if you pull out your calculator, equals about 1.5 tons of solid waste per year. And that’s a lot of trash.

The at-home COVID-19 test kids that were distributed by the state of Massachusetts have arrived in Holyoke and are ready to be picked up. Holyoke will be sending home test kits with every student in their public school system and kits will be available at the following agencies:

Holyoke: loosening the shackles of crime

For three years running, the data from the FBI’s Uniform Crime Reporting Program - a collection of the number of offenses that come to the attention of law enforcement for violent crime and property crime across each town, city, state, and region - rated Holyoke among the top three as one of the most dangerous cities in Massachusetts. This is despite the fact that the crime rate in Holyoke has been steadily decreasing for the past five years. This year, the crime rate in Holyoke has decreased by 12.55%. Arrests are down as well.

The Baker-Polito administration has purchased 2.1 million OTC rapid-antigen COVID-19 test kits that will be delivered to 102 Massachusetts towns this week. Holyoke, as well as Amherst, Northampton, Huntington, South Hadley, Springfield, and Ware, are among the 102 municipalities the administration has targeted as being among those Massachusetts towns with the highest percentage of families living at or below the poverty level. These towns account for almost 3.7 million Massachusetts residents.

There’s nothing like the feeling of crawling into a comfy bed at night made extra cozy with newly washed sheets that smell fresh and clean. It’s a bit of heaven on Earth especially after a hard day’s work, isn’t it?

You’ve undoubtedly heard the adage, “you are what you eat”. Of course, this doesn’t mean if you eat a watermelon, you’ll turn into one. What it does mean is if you eat healthy food, you’ll become healthy; not only healthy in body, but also in mind as well.