There is a new bird in town and it is scaring pigeons away to keep building roofs in Los Angeles clean.

Spencer has the day off today, so he’s a little more relaxed than normal. He’s too heavy to labor since his stomach is full of uncooked quail flesh. Nonetheless, he consented to leave the safety of his Palmdale aviary, where he lives with his brother, Shady.

Spencer is a trained Harris’ hawk, and his duty is to soar above the museum and its dazzling glass dome, keeping pigeons off of the open-air terrace and off the new monument. As the Academy Museum prepares to open on Sept. 30, his efforts are more important than ever. For the debut, the museum underwent a five-week rigorous cleaning, with all 1,500 glass panels on its dome cleaned. 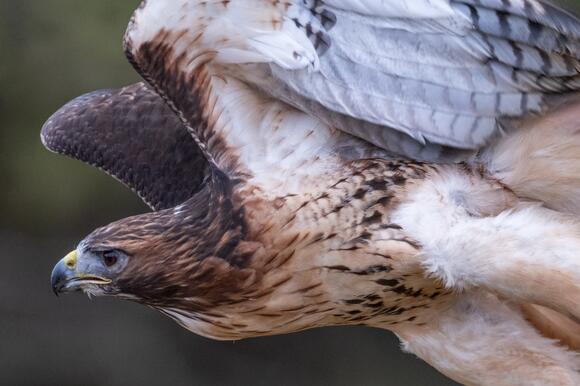 There is a new bird in town.Photo by Richard Lee on Unsplash

Spencer has taken his trainer, Lindsey Benger, with him today. She describes falconry-based bird control as a “natural, non-toxic form of pest management.” It’s more compassionate than putting poisons and spikes on surfaces, and it’s more successful than scaring birds away with streamers or imitation owls.

Benger, a falconer for nearly a decade, works as a subcontractor for Hawk Proz, a company that offers falconry services throughout the western United States. The Academy Museum has a contract with the firm to fly Spencer eight times a month, on average twice a week, for up to two hours each trip. Spencer used to come three or four times a week when he first began in 2017 when the pigeon issue was much worse.

Spencer sits erect on her gloved wrist, anklets connected to a leash on his lower legs, and a leather hood over his head to keep him quiet while Benger explains this. As he listens to the discussion, his yellow and black beak twitches left to right.

Falconry-based bird control is popular in areas like vineyards, where a swarm of blackbirds can destroy a grape crop in a week, and landfills, which are overflowing with the garbage that seagulls find appealing. However, in more heavily populated locations, such as malls and office buildings, it’s been a rising trend during the last decade.