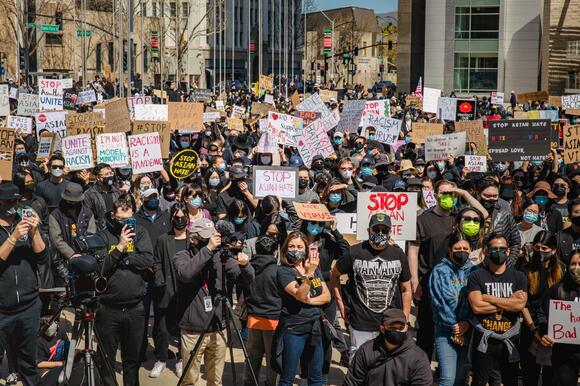 Student-led protest against anti-Asian racism in San Francisco draws hundreds. Demonstrators shout, “Stop, stop, stop Asian hate,” and “Racism is a pandemic, too” Demonstrations honor Angelo Quinto, a Navy veteran who died after a police officer knelt on his neck. The action follows an escalating surge of abuse in the U.S. against Asians, including the Atlanta shooting deaths of eight people, including six Asian women. The audience had a question for District Attorney Chesa Boudin, according to activists.
More marches are expected throughout the Bay Area this weekend. NAACP President Amos Brown stood shoulder to shoulder with organizers. “We will fight to overcome hate, violence, and bigotry,” Brown said. The most serious charge on the books is for the killing of Vicha Ratanapakdee.

Hundreds of people assembled in San Francisco’s Union Square on Friday for a nonviolent, student-led protest against anti-Asian racism in the Bay Area and around the world.

“We want to bring everyone together and have the voices of our Asian community be heard and seen,” organizers said in a statement sent out prior to the demonstration on Friday.

The crowd marched across the city to the Embarcadero on Friday afternoon for a closing demonstration. On-the-ground video caught huge crowds of people shouting, “Stop, stop, stop Asian hate,” followed by marching drums. “Racism is a pandemic, too,” and “Protect Asian lives” were among the signs carried.

Former city supervisor Sandra Lee Less spoke at the protest, recalling a white woman assaulting her mother on a Muni bus while she was a teen, according to the Bay Area News Group.

According to the news outlets, she said, “These incidents are not new.” “These occurrences have always occurred.”

Supervisor Matt Haney of District 6 in San Francisco shared photos from the march on Twitter, calling it a “powerful, huge” moment in anti-racist action.

“Powerful, huge March Against Hate down Market Street, in solidarity with [the] Asian community, led by youth, standing against hate and racism,” Haney wrote in a tweet.

In addition to speaking out against anti-Asian brutality, the demonstrations honored Angelo Quinto, a Vallejo resident and Navy veteran who died last December after a police officer knelt on his neck during a mental health crisis. Angelo’s family appeared at the protest, sporting Angelo’s mask on jerseys and hoodies.

According to a video posted by KGO, his girlfriend, Bella, said during the rally, “There’s no good reason why my brother, Kuya Angelo, shouldn’t be here protesting or speaking out against anti-Asian violence today.”

The action follows an escalating surge of abuse in the United States, including the brutal Atlanta shootings that left eight people dead, including six Asian women.

The audience had a question for District Attorney Chesa Boudin as well. Those who inflict abuse against Asians would face harsh penalties, according to the activists. “Do Your Job!” screamed the party at one stage.

The presentation was scheduled for Monday since it was Antoine Watson’s court day. He is charged with the death of Vesha Ratanapakdee, an 84-year-old who was pulled to the ground and later died.

“This event has outraged us! What has happened has infuriated us! As a culture, we place a premium on public safety “Tung addressed the audience.

To demonstrate unity in the battle, NAACP President Amos Brown stood shoulder to shoulder with organizers.

More marches are expected throughout the Bay Area this weekend, including one at City Hall in San Francisco on Saturday at 11 a.m., and another in Milpitas and Dublin on Sunday afternoon.

“I am devastated by the recent acts of violence against Asian victims and my heart breaks for the entire AAPI community that has been victimized by violence and fear-both here in San Francisco and across the nation.

We will fight to overcome hate, violence, and bigotry and make sure that our most vulnerable community members are-and feel-safe. We are continuing to work closely with the Coalition for Community Safety and Justice (CCSJ) to prevent acts of hate and violence in the AAPI community and we are working hard to hold perpetrators of violence accountable.

I have filed murder charges against Mr. Watson-the most serious charge on the books-for the killing of Vicha Ratanapakdee-and he is currently detained at our office’s request.”

All photos by Jason Leung on Unsplash