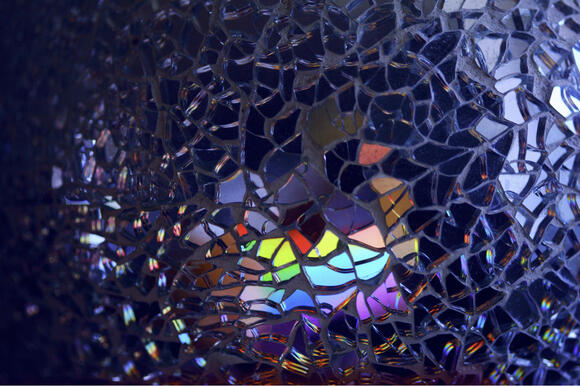 Beginning September 9th, the Delaware Contemporary's Fall/Winter 2022 season theme "Through a Glass, Darkly" will include new and recent works by artists working with glass and glass-related materials and processes, exposing the material’s dual nature.

This exhibit will span six galleries and occupy more than 6,000 square feet. Selected works will engage the historical promise and power of the material to reveal and bring clarity while challenging viewers to acknowledge an inherent interconnectedness between enhancement and distortion.

To see “through a glass” — or mirror — “darkly” is to have an obscure or imperfect vision of reality. The expression comes from the writings of the Apostle Paul; he explains that we do not now see clearly, but at the end of time, we will do so.

Historically, glass has augmented human perception, allowing us to view parts of the world that are otherwise elusive to our limited natural senses. While revealing the minuscule and distant, preserving the fleeting, and encapsulating the fragile and reactive, glass also obscures our perception of the very things it helps us to observe. The nature of the material is two-sided; it both enhances and subverts vision. Glass is an instrument for enlightenment, and at the same time, it is a driver of misinformation.

David King, Helen Lee, Kristin Neville Taylor, and Bohyun Yoon have been curated into the exhibition as featured artists, and have several works included in the show.

About the Guest Curators

Kristin Deady is the Assistant Dean of Glass at Salem Community College. She received her AFA from Salem Community College, her BFA from the Rochester Institute of Technology, and her MFA from the Tyler School of Art and Architecture at Temple University. Kristin's work investigates the constructed nature of human perception. Her work freely crosses mediums and is more tightly bound to her investigations than to a specific material. However, her ideas are often provoked, and informed, by her relationship with glass.

Jenna Lucente is an Associate Professor of Art at Salem Community College and a practicing studio artist at The Delaware Contemporary. She received her BFA from Syracuse University with a focus on drawing and painting and then her MFA from CUNY Queens College in the same discipline. In addition to exhibiting her drawings and paintings locally, Jenna is a public artist who has been commissioned by the Metropolitan Transit Authority (Arthur Kill Station, Staten Island, New York), as well as New Jersey Transit (upcoming, Elizabeth Station, New Jersey)

Alexander Rosenberg is an artist, educator, and writer based between Philadelphia and New York. He received a Master of Science in Visual Studies from MIT and a BFA in Glass from Rhode Island School of Design. His artistic practice is rooted in the study of glass as a material, in conjunction with broad interdisciplinary investigation crossing over into many other media and research areas. He was on the Netflix series Blown Away (season 1 & Blown Away: Christmas) and was one of the artists with an interactive work at Eastern State Penitentiary last year. Alexander is currently the Glass Studio Director at Wheaton Arts.