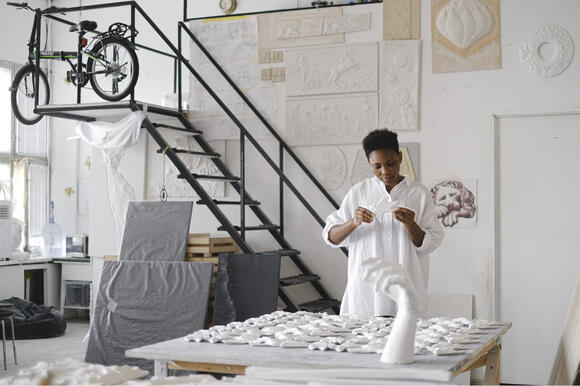 Kasmira Cade Seymour is an artist comfortable in many mediums, an art educator, an independent curator, and a published poet. Her artwork is bright, thought-provoking, and colorful. It speaks to the common human experiences. Kasmira was born in Philadelphia and raised in Southern New Jersey. She currently resides in Wilmington, Delaware.

Alejandro Danilo Leal was born in Quilpué, Chile and immigrated to the United States when he was 2 years old. He grew up across the river from New York City in Weehawken, New Jersey, and now makes his home in Wilmington, Delaware. His formal art training came from the Art Students League of New York, where he began to experiment by mixing both digital and classical approaches to figure drawing and was awarded the Nessa Cohen Grant in 2010. He has studied with various well-known painters including Nelson Shanks, Burt Silverman, and primarily with Costa Vavagiakis and David Jon Kassan.

Shefon N. Taylor is an interdisciplinary artist focused on themes of memory, interiority, and the exceptional found in the Black vernacular. Her practice is framed as the creation and building of time, constructing a bridge across the gaps of memory. Shefon cites artists such as Toni Morrison and Carrie Mae Weems as influences on her work.

John Webb graduated in 2013 with a BFA in painting and drawing from East Carolina University. While studying at ECU he also explored photography, printmaking, sculpture, illustration, and ceramics. For his senior show, he developed an imaginative narrative called "plight." In exploring different mediums, John found a love for ceramics and created a ceramic installation to add a three-dimensional element to his exhibition. Subsequently, in 2014 he relocated to Landenberg, PA and created additional work for his plight series. In 2015 he got the opportunity to show his linear narrative and ceramic installation at the Chris White Gallery in Wilmington, DE.

As an art and community space, The Delaware Contemporary seeks to assist in the career growth of new and emerging artists with an emphasis on providing the Residency Program to Black, Indigenous, and People of Color (BIPOC) artists:

We are driven to provide equitable access to career development for underserved populations and strive to diversify the nonprofit and museum industries through this opportunity.