Enhancing life experiences through Northwest offerings. Find places to visit and love. Learn about the treasures in your own backyard. Day trips and events, arts programs, galleries, restaurants, historical sites, gardens, theaters, and music! I will give you the lowdown on accessibility, historical background, and introduce you to hidden treasures. You don't have to go around the world to gather a wonderful memory. Make your life a treasure trove of fulfilling Northwest experiences. 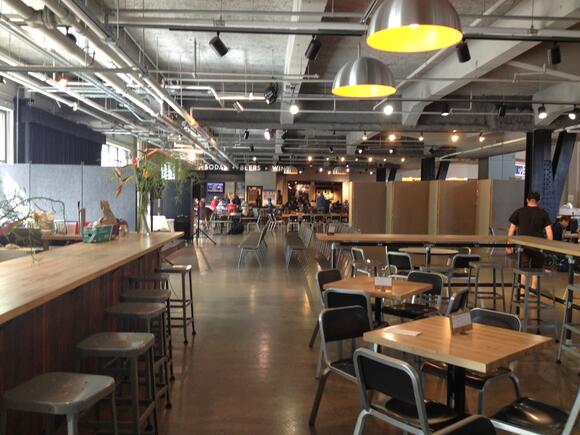 As a kid, in the years following the 1962 World’s Fair in Seattle, the Center House was one of my favorite places to visit. The original food court was filled with exciting temptations from the cutting edge Orange Julius to the ever-popular MacDonald’s. Over the past 50 years, time had taken its toll on the good, old Food Circus. The choices had become flat and predictable. It was uninspiring to wander through the food court and see that the once original and vibrant heart of the Seattle Center had become a pale version of its former self. 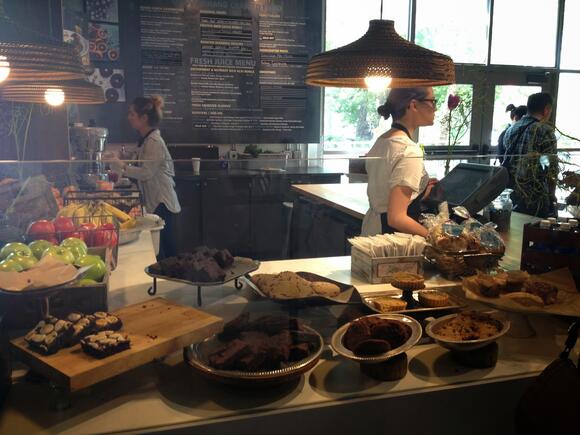 The Plum Pantry at The Armory in the Seattle Center HouseJan Ewen/eatdosee.com

On a recent visit, my friend and I chose to have our lunch at the vegan restaurant, Plum Pantry, a more portable version of the popular and delicious Plum Bistro in the Capitol Hill district on 12th Avenue.
We found a Groupon offering a 2 for 1 meal deal at this popular vegan restaurant and that was enough to convince us to try the healthy cuisine. 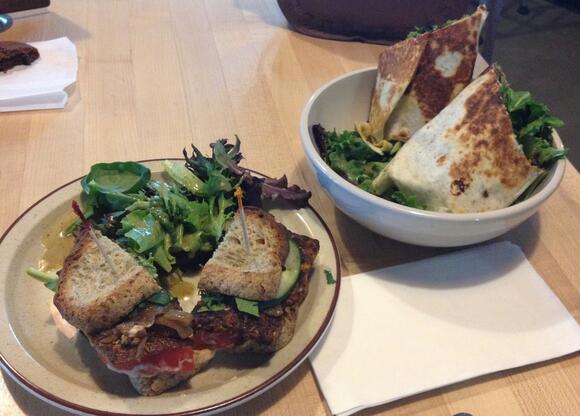 I tried the baked Tempeh Sandwich with grilled onions, avocado, tomato, cilantro and chipotle aioli on gluten free bread. I must tell you, it was delicious. 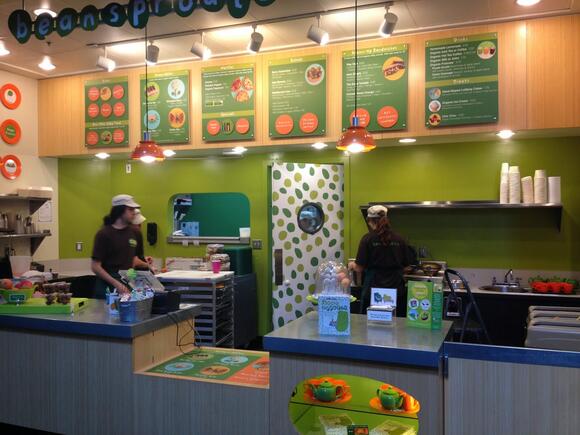 There are several other delicious-looking restaurants I want to experience on my next visits, such as Big Food Barbeque, Blue Water Taco Grill, Quincy’s and the Skillet Counter, and many more. There’s even an adorable restaurant called Bean Sprouts that caters to the uniquely specialized tastes of children in highly creative ways. 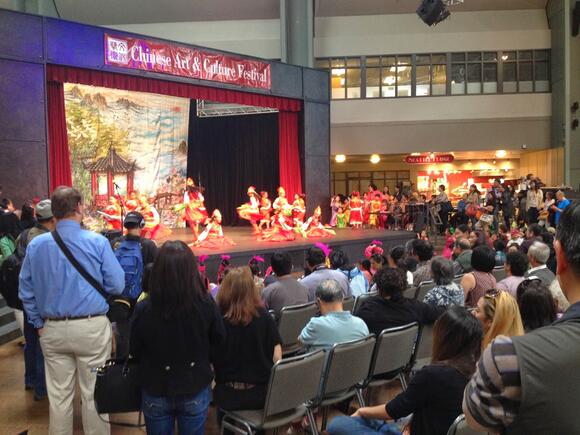 We enjoyed colorful dance performances on the central stage accompanied by authentic instrumentation. The event was certainly well received. There was standing room only.

Many local interests will be moving into the refurbished Center House in the near future, including a new home for Seattle’s progressive radio station, K-EXP. 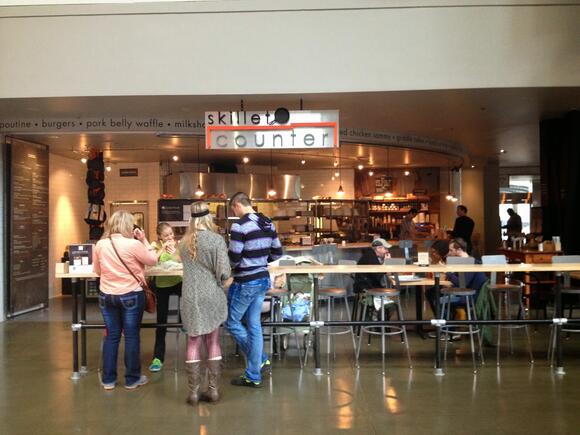 • Grab a healthy picnic lunch and enjoy the new deck.

• Or just grab your favorite cup of coffee.

Enhancing life experiences through Northwest offerings. Find places to visit and love. Learn about the treasures in your own backyard. Day trips and events, arts programs, galleries, restaurants, historical sites, gardens, theaters, and music! I will give you the lowdown on accessibility, historical background, and introduce you to hidden treasures. You don't have to go around the world to gather a wonderful memory. Make your life a treasure trove of fulfilling Northwest experiences.

Tides Tavern in Gig Harbor is a Perennial Favorite

The iconic Tides Tavern in Gig Harbor, WA.Jan Ewen/eatdosee.com. Just across the Narrows Bridge from Tacoma is the charming, waterfront town of Gig Harbor. Lined with boats of all sizes, the harbor offers a walkable, visual delight, a unique shopping experience, and many fabulous restaurants. A visit to Gig Harbor makes a perfect day trip for most Puget Sound residents.

Antique Sandwich Co. Has a Long History of Sandwich Magic

The Antique Sandwich Company, Tacoma, WAJan Ewen/eatdosee.com. Who doesn’t love a great sandwich? And maybe a piece of pie, or a slice of homemade quiche? How about a salad heaped with quality meats, fresh ingredients, and homemade dressings? There is something fresh and delicious for everyone at the cozy Antique Sandwich Co. in Tacoma.

The bastion at Fort Nisqually, Tacoma, WAJan Ewen/eatdosee.com. There is an historical gem in Tacoma that is well worth an afternoon’s saunter. I hadn’t visited Fort Nisqually in Point Defiance Park for several years and I recently discovered that this “living history museum”, run by the Metro Parks of Tacoma, is more visitor-friendly than ever.

Elandan Gardens - Where the Story is Everything

Elandan Gardens, Bremerton, WA.Jan Ewen/eatdosee.com. You may not realize that right in your backyard is an internationally known garden renowned for its bonsai collection and the work of master bonsai artist, Dan Robinson. When it comes to bonsai, Dan tells me that “the story is everything”. This becomes increasingly clear as he walks me through his stunning collection, sharing the stories of individual plants he has grown, sculpted, and revered.

Healthy Food Options at the Flying Apron Cafe Will Not Disappoint

Let me just say, it was the best cup of brewed coffee I’d had in a long time. Now, let’s talk about the food and atmosphere. We were looking for an afternoon treat and a little coffee pick-me-up. Finding a café with a comfortable place to watch the world for a while? That would be an added bonus.

The Coastal Kitchen for Fresh Oysters or "Blunch" on Capitol Hill

The Coastal Kitchen in the Capitol Hill District of Seattle, WA.Jan Ewen/eatdosee.com. When you think of inland Seattle restaurants, your first thought may not be fresh, local seafood, but the.

I thought I was going to be writing a post on a wonderful lunch at Jai Thai on Fremont Ave. in Fremont. Fremont is an eclectically charming neighborhood of Seattle: self-proclaimed “ImagiNation” and Artistic Republic as recognized by the King County Council. We did have a delicious lunch of Thai favorites but the restaurant was slightly uninspiring. The food was enjoyable, fresh and reasonably priced but this was perhaps, not a destination restaurant.

A heavily laden wisteria adds to the local landscape.Jan Ewen. Welcome to Eight Unique and Beautifully Designed Gardens. Did you know that the 700-acre Point Defiance Park, which offers spectacular views of Mount Rainier, the Olympic Mountains and Puget Sound, is also the home of eight beautifully designed gardens that will be at the height of their blooming season throughout the next few months? So, if you need a peaceful afternoon soaking in a little natural magnificence, I suggest you take a leisurely stroll through a few of the Point Defiance Gardens.

Leavenworth Shines in Any Season

The Christmas shop, Kris Kringl, in Leavenworth, WA.Jan Ewen/eatdosee.com. There are many things to love about Leavenworth, Washington and the opportunities change throughout the year. Particularly known for it's holiday cheer, Leavenworth also offers a bounty of year-round excitement for everyone in your household. The surrounding areas in this Cascade mountain town are home to snow sports, camping, hiking, bird-watching, water sports in the nearby lakes, wineries, and the list goes on.

Lakebay Marina is a Salty Sight from the Past

Casual dining at Lakebay Marina, Lakebay WA.Jan Ewen. The sights and smells of the vintage Northwest waterfront are alive and well at the Lakebay Marina in Lakebay, WA. Off the beaten path on the Key Peninsula near Gig Harbor, the Lakebay Marina harkens back to a rich, salty history. The nearly 100-year-old marina, nestled in the Mayo Cove in Carr Inlet, offers safe harbor to a small fleet of pleasure craft in a stunning location. To reach the marina, you must first “walk the plank” or pier, out to the old structure. There is not a lot of signage welcoming you to the idyllic spot, but when you see the old, white building at the end of a rather long gang plank you’llknow you have arrived.