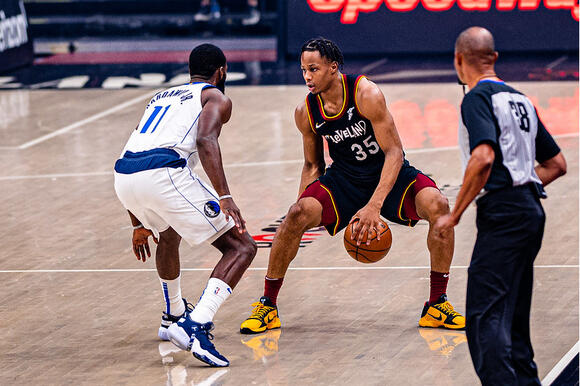 Against the powerhouse Phoenix Suns on May 4, Okoro recorded a career-high 32 points (10-16 FG, 3-4 3FG, 9-9 FT) and a career-high-tying six assists. In doing so, he became the first Cavs rookie to record 32 points or more on 16 field goal attempts or less since January 31, 1998, when Lithuanian-born big man and club legend Žydrūnas Ilgauskas tallied 32 points and converted 12 out of 14 field goals against the Detroit Pistons.

He became the first Cavs rookie to go 9-9 from the foul line since March 11, 2012 (Kyrie Irving, 10-10 FT vs. HOU). Only three other NBA rookies had a game of at least 30 points and five assists this season (Anthony Edwards, Tyrese Maxey, LaMelo Ball).

Even in a win over Toronto on March 21, Okoro was the first Cavs rookie to tally at least eight points, seven rebounds, five assists, two steals and one block in a single game since LeBron James, who did it three times in 2003-04. Coincidentally, both James and Okoro are the Cavs' first-round picks.

During Cleveland's victory over Boston on May 12, he became just the fifth Cavs rookie since 2000 who tallied at least 15 points, six rebounds and six assists in a single game (LeBron James, Kyrie Irving, Cedi Osman, Carlos Boozer). Additionally, Okoro notched the first double-double of his NBA career against Indiana on May 10 (22 points and career-high ten rebounds). On April 28 versus Orlando, he became the first Cavs rookie swipe four steals in a single game since Matty Dellavedova in 2013.

Is Isaac Okoro another legend in the making at Cleveland? We should see what the #35 can bring to Believeland.