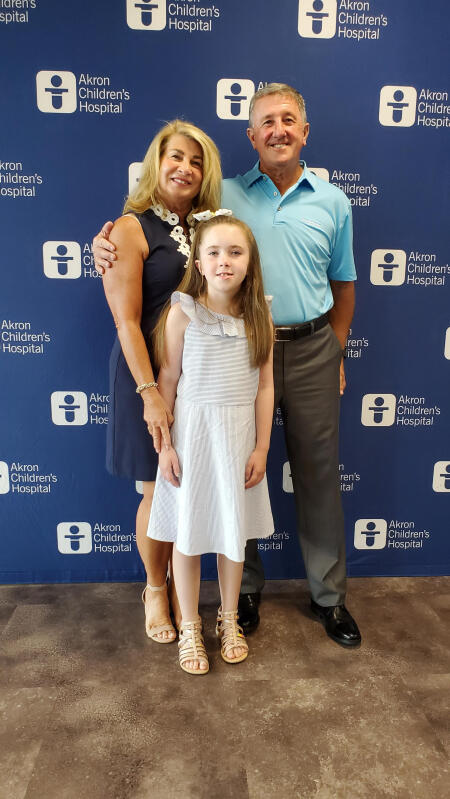 AKRON, OH — A gift worth $2 million from James and Marguerite Pearson has created the James F. and Marguerite A. Pearson Endowed Chair in NeuroDevelopmental Sciences for Rare Diseases at Akron Children’s Hospital.

The chair will be held by pediatric neurologist, Dr. Vivek Veluchamy. The Pearsons, of Wadsworth, made the gift in order to give appreciation for the care their granddaughter, Elise Bonsky of Copley, receives at Akron Children's Hospitals' NeuroDevelopmental Science Center (NDSC).

The chair aims to acknowledge outstanding performance, give a tool to recruit and retain talent and serve as funding to support NDSC patients and families.

The new chair was announced June 10 at the NDSC when the Pearsons were thanked by president and CEO of Akron Children’s, Grace Wakulchik for their support of the department.

“The Pearsons have seen firsthand the specialized work that we do in our NeuroDevelopmental Science Center. We are grateful for their generosity and honored to name Dr. Veluchamy to this chair to recognize his outstanding work and special relationship with their family," said Wakulchik.

Elise who is currently nine years old suffers from Alexander disease, a rare disorder of the nervous system, with Veluchamy as her doctor at Akron Children's Hospitals.

“Dr. Veluchamy has been instrumental in the care Elise has received the past seven years. We believe Elise is doing so well because of the care Dr. Veluchamy has provided. Our family is beyond grateful, and we hope our support can help other families in need of care that can truly improve a child’s quality of life,” said James Pearson.

Meanwhile, Dr. Veluchamy was surprised by Pearson's gift as well as the creation.

“I am grateful, overwhelmed, and surprised. It’s been a privilege to help Elise and her family these past few years, and I’m touched by their support of the NDSC,” said Dr. Veluchamy.