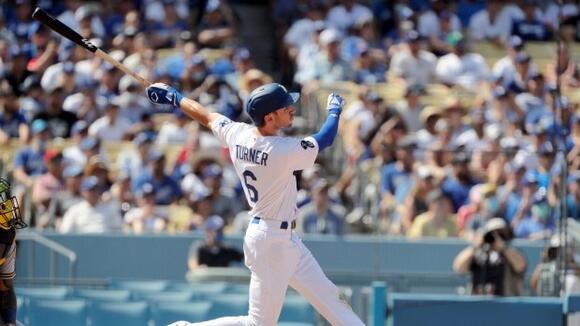 PHILADELPHIA- Luxury tax be damned; the Phillies are all in this upcoming season.

Today, the Phillies signed all-star shortstop Trea Turner to an 11-year, $300 million contract, according to MLB Insider Kiley McDaniel.Signing Turner will almost assuredly incur an additional luxury tax penalty for the Phillies, as this will be the second year in a row that the team is above the $230 million tax threshold. For a team that desperately wants to return to (and win) the World Series, though, this is what it takes.

After a well-publicized free-agent pursuit this offseason, the Phillies finally got their man. Turner, 29, is one of the most electric players in the league. A former all-star and World Series champion, Turner is everything the Phillies are looking for at shortstop.

Turner has been one of the most elite batters at his position over the past three years and the data backs that up.

Turner has made the National League All-Star team each of the last two seasons. Turner also led the majors in hits in back-to-back seasons (2020 and 2021).

Over the past three seasons, Turner has been the second-best hitting shortstop in the majors, generating a higher OPS+ than everyone except Fernando Tatis Jr., whose output came in half as many plate appearances due to injury and suspension.

Last season, Turner slashed .298/.343/.466 with 39 doubles, 21 homers, and 27 steals in 30 attempts for the Los Angeles Dodgers in 2022. His impressive blend of speed and power is what makes him special and teams will have nightmares trying to navigate safely through the Phillies lineup.

Again, it will cost the Phillies an arm and a leg, but for a superstar like Turner, the hefty price is worth every penny. He will be the best-hitting shortstop the team has had since Jimmy Rollins and should rake between sluggers Rhys Hoskins and Kyle Schwarber at the top of the lineup.

Powered by former NL MVP Bryce Harper and with Trea Turner now in town, the Phillies' offense looks as potent as ever. With the additional firepower in the lineup, the reigning NL Champs seems like an early favorite for another World Series run.

Following an unpredictably wild 2022 season, the Phillies may have another historic year in store for them.

WASHINGTON - Target and Nestle became the latest companies to join the pledge to VP Kamala Harris' migrant program when they contributed $950 million to the cause. The sizable, nearly $1 billion dollar contribution raised the combined total to $4.2 billion since Harris began accepting funds two years ago.

WASHINGTON - Vice President Kamala Harris and the Partnership for Central America today announced more than $950 million in new private sector commitments in response to her Call to Action for Northern Central America, bringing the overall total to more than $4.2 billion since May 2021.

PHOENIX - Famous climber and activist nicknamed the "Pro-Life Spider-Man" was arrested on Tuesday after successfully scaling all 40 stories of Chase Tower in Phoenix. The man identified as Maison DesChamps, 23, climbed the building without the assistance of a harness or rope and live-streamed the ascent on his social media.

TEXAS - Governor Abbott and FBI director Chris Wray have been adamant that TikTok’s ties with the Chinese government cause widespread cybersecurity concerns. Wray noted that the app collects data on its users that could be used for traditional espionage operations.

ARIZONA - All eyes are on Eagles quarterback Jalen Hurts this week as the young MVP candidate aims to pioneer his team to a Super Bowl victory over the Chiefs. As recently as a couple of years ago, though, before Hurts was a household name, the Eagles franchise quarterback went through some of the most challenging times in his life.

TEXAS - Governor Abbott has long opposed the popular video-sharing app TikTok. For months, Abbott has questioned the cybersecurity and data storage tactics of TikTok and has even inspired Texas universities to ban the app from campus Wi-Fi networks.

TEXAS - Jobs are on the rise in America, even more than economists anticipated. As a result, the U.S. unemployment rate fell to 3.4 percent, its lowest level since 1969. So much for moderation,”said Beth Ann Bovino, the chief U.S. economist at S&P Global Ratings.“We certainly didn’t see it in this report.”

WWE superstar Hulk Hogan has been active in the wrestling industry since the 1970s and the physical toll appears to be catching up to the iconic performer. Kurt Angle, a fellow former WWE champion and close friend of Hulk Hogan, shared details of Hogan's recent back surgery and the subsequent physical consequences.

PHILADELPHIA - After three eventful weeks of the NFL playoffs, the Super Bowl matchup is finally set- and it will be a historic one. The NFC champion Philadelphia Eagles will face the AFC champion Kansas City Chiefs in Super Bowl LVII next month in Arizona.

PHILADELPHIA - NFL veterans Jason and Travis Kelce could fulfill a childhood dream and become the first set of brothers to play each other in the Super Bowl. With only four teams remaining in the NFL postseason following an exciting divisional round, the Kelce brothers are each one win away from a trip to the Super Bowl.

Texas-led coalition of 20 states to sue the Biden administration over "illegal" plan to welcome 30,000 migrants monthly

AUSTIN - Texas lawmakers filed a bill on Tuesday to provide all Texas teachers with a $15,000 pay raise. The legislative plan introduced by Austin Democratic Rep. James Talarico would provide school districts with adequate funding to increase the salaries of Texas teachers across the board.

World's largest plane is bigger than a football field and will help the U.S. military develop hypersonic travel

CALIFORNIA - After completing its longest flight to date, the world's largest plane is nearly ready to help the United States military develop hypersonic vehicles. The aircraft, called the Stratolaunch Roc, was partly designed by former Microsoft CEO Paul Allen and boasts a wingspan larger than a football field.

TEXAS - For the last six years, Texas Central has pushed for the creation of a Dallas-to-Houston speed rail that would shuttle passengers between the two cities in just 90 minutes.

Pizza Hut breaks Guinness world record for largest pizza ever with over 68,000 slices

LOS ANGELES - To promote the return of its famous "Big New Yorker" style slices, Pizza Hit had the absurd (yet awesome) idea to make the largest pizza ever. The Big New Yorker is an extra-large, extra-cheesy pizza that's about 30% bigger than the large-sized pizza currently sold at the chain. A fan favorite in the 90s, Pizza Hut decided to celebrate the return of the famous pizza in a big way.

TEXAS - Universities across Texas have begun restricting access to the TikTok on campus Wi-Fi networks after Governor Abbott expressed concerns over the app developers' ties with China.

FORT WORTH, Texas - An abandoned, Texas-based KKK headquarters is being converted into an arts center after being purchased by a non-profit coalition. The building, now owned by Transform 1012 N. Main St, will be named after Fred Rouse, the first lynching victim in Dallas.

Stevie Wonder is one of the most influential artists of all time. The famous voice behind hit songs “Ribbon in the Sky,” “Superstition” and “I Just Called to Say I Love You,” Wonder has won the fourth-most Grammy awards (25) ever. He is one of just three artists to win Album of the Year award three or more times.