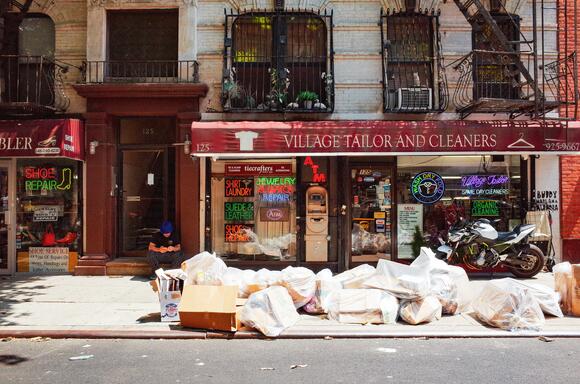 Photo by Krisztina Papp on Unsplash

There are currently 2,346 general collection trucks in the sanitation fleet. The New York City Department of Sanitation is the largest sanitation department in the world, which collects 10,500 tons of refuse and 1,700 tons of recyclables daily.

The LR Electric is powered by two 167-kilowatt motors that have 536 and 448 peak and continuous horsepower and 4,051 pound-feet of torque. It is powered by four lithium-ion batteries and is equipped with a three-mode regenerative braking system. This means that the constant start and stop of the trucks during collection is helping charge the battery. The vehicle, though more expensive, requires less maintenance than its diesel counterpart. According to Mack Trucks, this means saving money while increasing output.

99% of DSNY’s collection truck is currently from Mack. The department has been at the forefront of advanced fuel technology implementing compressed natural gas in 1989 and EV in 1999. LR marks the first battery-electric refuse vehicle in the fleet.

This month, DSNY has retrofitted 12 of their garbage trucks with hybrid-electric motors and batteries from Effenco -- a Canadian company whose technology is currently being used in the streets of Paris and Los Angeles for practical uses such as dump trucks and port terminal tractors.

Instead of lithium-ion batteries, the Effenco trucks will be using ultracapacitors -- a propulsion system that doesn’t just operate the engine but other onboard equipment as well, including the garbage compressor. Because the trucks have an immense electrical delivery, their energy storage capacity is shorter, but they have a much longer lifespan than lithium-ion batteries. The hybrid electrical technology also shows reduced electrical consumption by 30% versus fully electric vehicles.

“Ultracapacitors, we believe, are better suited for heavy-duty and high-power applications. The downside is you can’t store a lot of energy in them … But in terms of cycling, they can do millions of cycles with no effect on battery life,” said Effenco President David Arsenault.

Effenco intends to expand the technology in the future, the company recently announced plans for high-intensity wireless charging station technology for use with its ultracapacitors, which could mean charging points along a designated route.

“So there’s no need to plug it overnight or something,” said Arsenault. “As it does the route, there are some areas where the vehicle’s operation is immobile, and we want to make sure that we can leverage data and we can have a wireless charging point located at that same place so that as they do the work, they can also top off the ultra-caps.”

DiRico has already ordered 14 brand-new trucks outfitted with the ultracapacitors to join the 12 that are currently in testing. “Preliminary test results were very positive,” said DiRico.

“Electric trucks will be a key component to helping New York City meet its ambitious goal of reducing GHG emissions by 80% by the year 2035, said DiRico in a statement. The city aims to be fully carbon neutral by 2050.

The fleet’s electrification can help with other problems that the department has faced due to the use of diesel vehicles. Diesel trucks have a higher noise level, which makes it dangerous to passing vehicles which the truck drivers can’t hear when they approach from behind. The constant start and stop of the engine also results in the trucks belching out noxious fumes which could pose hazards to residents, pedestrians and truck drivers and collection workers. Worker unions have viewed the electrified vehicle feature as a big bonus because it makes the trucks safer.