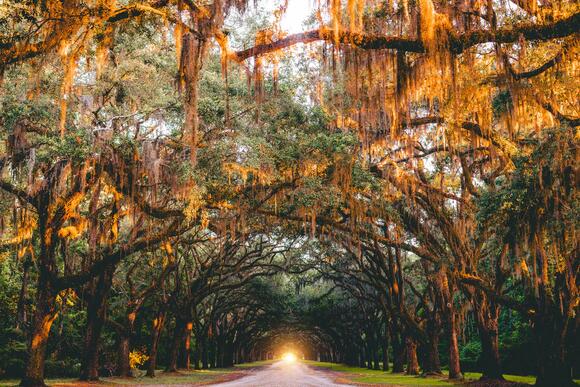 Photo by Jose Llamas on Unsplash

It is such a beauty that it was presented as a gift to President Abraham Lincoln during the civil war. Union General Sherman burned Atlanta to the ground during his southbound march, but upon arriving in Savannah and seeing its beauty, he sent a telegraph of the neat squares and lush greenery to the President, offering it as a Christmas gift.

Aside from its Southern charm, the city is also known for many other things. The Girl Scouts originated here. Founder Juliette Gordon Low, known as “Daisy” by her family and friends, started the movement with 18 girls in her hometown to share what she has learned abroad about a new outdoor and educational program for the youth.

For those who love the macabre, Savannah is known as America’s most haunted city. The American Institute of Parapsychology gets the most reports about the city. There are several “haunts” found in Savannah, too. The City Hotel -- now known as the Moon River Brewing Company -- was named the #1 Top Haunted Spot in Savannah by the Examiner. The Mercer House was home of Jim Williams -- the main character in Midnight in the Garden of Good and Evil. He is known as a voodoo practitioner and though acquitted in three separate murder trials, the ghost of the man he allegedly killed is said to haunt the home. Other places of interest to ghost hunters include the Bonaventure Cemetery, Fort Pulaski, and the Pirate’s House Restaurant.

If all that still doesn’t convince you to move to Savannah, Georgia may be the Creative Technologies Incentives of the Savannah Economic Develop Authority (SEDA) will. Established in May 2020, this program aims to help grow and attract creative technology jobs and investment to Chatham County. The incentive is for self-employed, remote workers of technology firms located anywhere else or relocating to take a position with a technology company in the area. Interested applicants must have at least three years of verifiable work experience and must secure at least a year-long lease or purchase a property. They will need to provide receipts and have a Georgia driver’s license. The incentive program will cover moving expenses with $2,000 after 30 days of residency. While not a huge amount, the stipend would be enough to cover moving service charges, vehicle rental, utility deposits, and gasoline.

Jen Bonnett, SEDA’s VP of Innovation and Entrepreneurship, hopes that the offer is enough to entice those who have been in the workforce for a few years and can take on a mentoring role for Savannah’s large student population. “For a young couple that’s just getting started and has a couple years of tech experience, you know, $2,000 will get you here,” she says.

Qualified businesses, on the other hand, can get a cash grant of up to $20,000 for every five high-tech jobs created and retained for the year. Jobs must be high-wage, meaning at least 25 percent above the country average wage.

The relocation incentive also hopes to bolster population growth for the area. The city’s population has been stagnant at around 145,000 residents over the last few years, without a significant influx of new residents. For those considering the move, it is also worth noting that the cost of living in Savannah is lower than the national average by 10% while the cost of housing is pegged at 33% less.