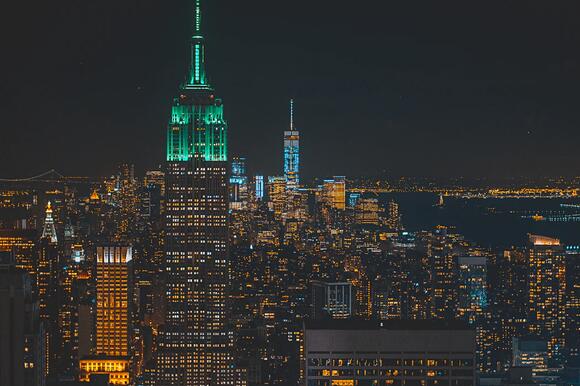 Photo by Osman Rana on Unsplash

The Empire State Building in New York City is known for several things. It was once the tallest building in the world -- and is still counted among the tallest to this day. It was also the epic scene for the classic King Kong movie. The Art Deco building was completed in 1931 and has been named as one of the Seven Wonders of the Modern World by the American Society of Civil Engineers.

Today, this icon landmark in midtown Manhattan is celebrating another feather in its cap. It is now fully carbon-neutral thanks to being entirely powered by wind. It now stands as the largest user of green power in real estate.

The Empire State Realty Trust (ESRT) has signed a three-year contract with Green Mountain Energy to power the Empire State building as well as other commercial real estate properties in its portfolio with wind energy -- a renewable source of electricity. The real estate group controls more than 10.1 million square feet of real estate.

Green Mountain Energy is a Vermont-based company and is the leading provider of sustainable energy. It offers both public and private real estate companies plans for using solar panels and wind turbines as an electricity source.

“ESRT is the leader in sustainable operations with a viable example of how to scale carbon-neutral technologies, strategies, and policies to balance with an effective economic business case,” Dana Robbins Schneider, SVP, director of energy, sustainability & ESG at Empire State Realty Trust said in a recent interview. “We have purchased renewable power from Green Mountain Energy for the World's Most Famous Building, the Empire State Building, for a decade. We now expand that to all properties in New York State with an additional Direct Energy contract for our Connecticut properties. We continue to advance our commitment to solutions that reduce our environmental impact. Our tenants now work in carbon neutral offices and the investment community can recognize our leadership.”

The switch will spare about 450 million pounds of carbon dioxide emissions from entering the atmosphere. The massive amount is equivalent to every home in the New York state turning off lights for an entire month.

Prior to the contract with Green Mountain, the Empire State Building has undergone renovations over the last ten years to reduce power usage and be more environmentally friendly. It has succeeded in reducing the power consumption of the 102-story building by 40 percent through groundbreaking energy and efficiency retrofit and architectural changes.

Almost 75 percent of the 4.64 million buildings in the United States are over 20 years old. According to the Department of Energy, these older buildings are not built to conserve energy. Commercial buildings are responsible for 79 percent of all carbon emissions in New York City.

For a building that’s almost 90 years old, it was a feat to transform the Empire State Building into one of the most sustainable buildings in the US. The efficiency overhaul project has dramatically reduced the building’s energy usage and has saved them millions in dollars in energy costs over the last decade. This was part of the $550 million Empire State ReBuilding restoration program. The building is in the top 20% or better of all Class A commercial assets in the nation when it comes to efficiency and sustainability.

Some of the changes to the building over the years include:

The Empire State Building has proudly earned the Energy Star certification from the US EPA Energy Star Portfolio Manager program since 2010.

Ah, New York City and alcohol -- they’re always a good combination. There are many watering holes in the city to find your craft beers and artisan cocktails. Then there are wine bars. A cut above the usual drinking spot, they are a flexible venue for casual dates, hanging out solo, a post-theatre drink or whatever you fancy. Gone are the days when wine bars were for the older generation. Vino has become popular again with the younger crowd of drinkers. Today’s wine bars are hip and trendy. They offer more than a glass of your favorite fermented grape pairing the beautiful drink with chef-made delicacies.

She Was Falling Madly In Love, So She Ghosted Him

Laney* (name changed to protect her privacy) was a lovely girl. She was easy to fall in love with. She was smart, sweet, and caring. She was always ready to help out as a friend. The only thing wrong with her, if anything, was that she was always guarded. She hated the idea of falling in love and being hurt. So, as much as possible, she always ends up putting any guy that even attempts to look at her with romantic intentions right in the friend zone.