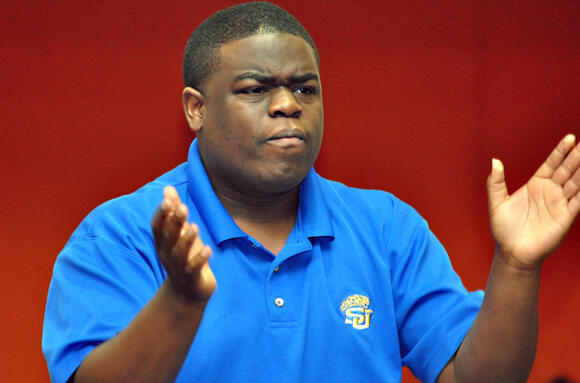 Known as the 9th Wonder of the World and founded by Mr. Benjamin J. Butler II in 1969, the Ocean of Soul Marching Band has performed at numerous high-profile events, including Super Bowl XXXVIII, the 2013 NBA All-Star Game Pregame Concert, and the 2018 NCAA Final Four.

Most recently, the band was featured in the 2021 Netflix series High on the Hog.

Expressing his gratitude toward the appointment, Simmons said, “It is an honor to join the TSU Family. Texas Southern has always been a respected rival of mine. I am excited to work with a program with so much history both in the band and HBCU world.”

He then continued, “I look to honor the rich history and traditions of the ‘Ocean of Soul’ while incorporating new and innovative ideas. Fans and alumni can expect to see what the band is known for as we rise to the next level. Ultimately, it will be the same Ocean, just a new wave!”

“We are thrilled that Mr. Simmons accepted this opportunity to lead the historic Ocean into the future. His talents are widely known and will help propel the Ocean of Soul to new heights,” she added.

Holding a Bachelor of Music and Master of Educational Leadership from Southern University, Simmons was appointed Director of Bands and Director of Fine Arts at the Louisiana Leadership Institute (LLI) by Louisiana Senator Cleo Fields. He led LLI as they were selected to participate in the Inauguration of President Joe Biden and Vice President Kamala Harris in January 2021.