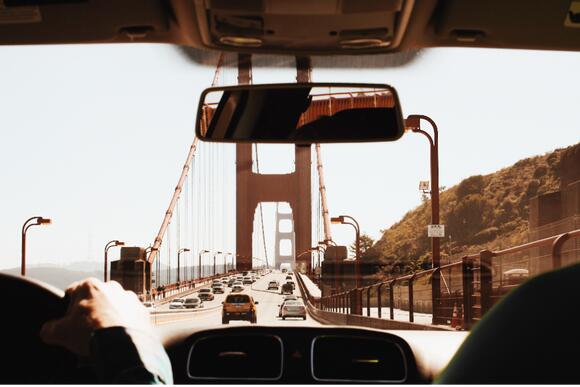 With travel being a thing of the past as we approach the second year of the pandemic, it's nice to reminisce about good ol' times and beautiful destinations we can't wait to discover once the future allows it again.

In this photo guide, we're covering San Francisco. The City by the Bay is a true west-coast gem, with a cooler climate and distinctive hilly terrain.

Here are San Francisco's top 10 photo spots, including all the best viewpoints for a panoramic vista of the Golden Gate Bridge.

*All photos featured in this article are my own

The Palace of Fine Arts 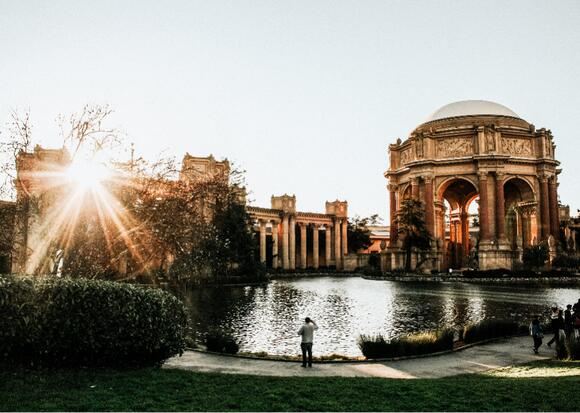 This beautiful structure in the city's Marina District was originally built as part of the 1915 Panama-Pacific exhibition. Today, the Palace is a beautiful event venue and popular sight for tourists, mainly thanks to its grandiose exterior reminiscent of ancient Roman architecture. 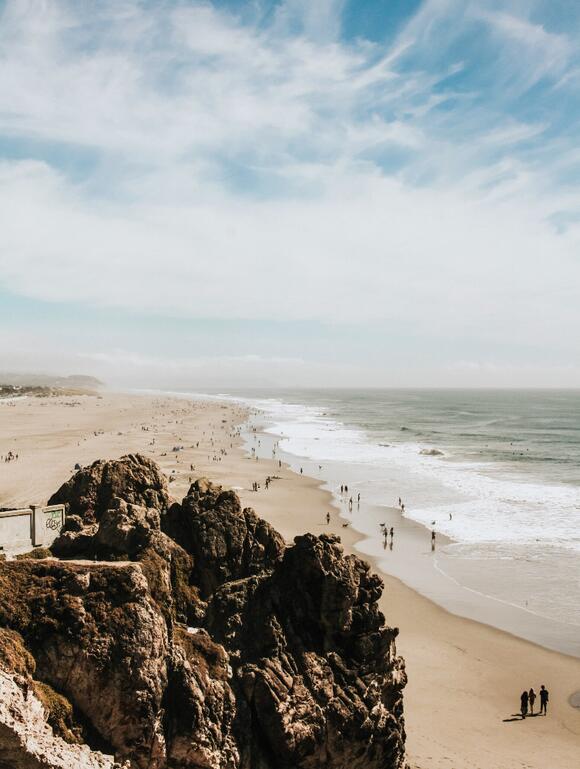 Ocean Beach sits adjacent to Golden Gate Park and spans the entire Sunset District of San Francisco. The beach stretches for three miles, offering an expansive view of the sand and ocean, with beachgoers and surfers en masse. This photo was taken from the Cliff House, a building on the north side of the area. It's a great spot to people watch!

Baker Beach offers one of the most scenic Golden Gate Bridge Views, with glimpses of the faraway Tiburon Peninsula and the crashing waves of the Pacific Ocean in the forefront. Catch the sunset at this photo spot for an especially magical Golden Gate Bridge moment.

This row of charming, colorful Victorian houses overlooking the hills may be best known for its appearance in the late 80s TV show, Full House. The houses border Alamo Square, a popular summer hangout spot. The San Francisco skyline in the background makes this unmistakable view an iconic photo location. You can find a large number of Victorian- and Edwardian-style buildings scattered throughout town.

Potentially the most recognizable of San Francisco's hilly roads, Lombard Street features one block consisting of eight sharp turns, making it the world's most crooked and curvy road. Watch cars and motorcycles meander their way down the short section, with tourists walking alongside them. During spring and early summer, you'll find colorful flowers nestled in the greenery, making for a beautiful shot.

The infamous Alcatraz Island is one of the city's major tourist attractions. Located on the island is the former notorious maximum security prison, Alcatraz Federal Penitentiary, known simply as Alcatraz. Today, the fort is a museum offering tours to those who want to get a glimpse inside of the once highly protected site. Even from far away, the small island looks impressive, demonstrating how sheltered and hard to escape the prison was for its inmates.

The Rolling Streets of San Francisco 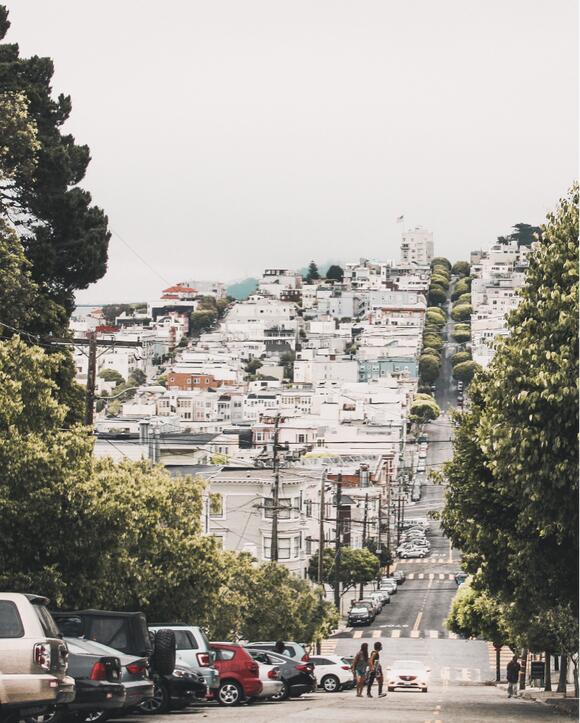 The hilly streets of San Francisco are a sight to behold all by themselves. The unusually hilly terrain of the city gives this California metropolis its beloved charm. With more than 50 hills, it is actually considered to be the second hilliest city in the world, right after La Paz, Bolivia. 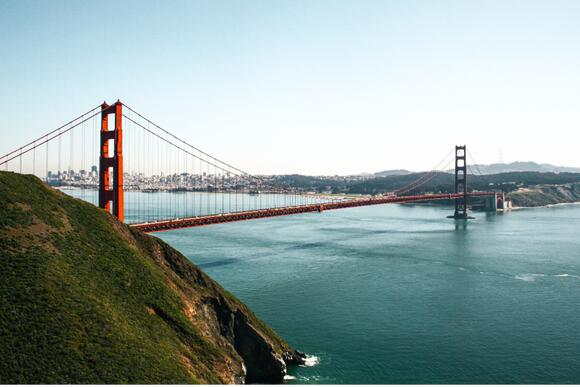 Battery Spencer, a prime photo spot, offers larger-than-life, close-up views of the Golden Gate Bridge and city in the background. The lookout point is a quick drive away from the bridge itself, and is located in the Marin Headlands as part of Fort Baker, a former army post. It was once a main defense site for the city and San Francisco Bay, and one of four concrete coastal gun batteries—hence the name. 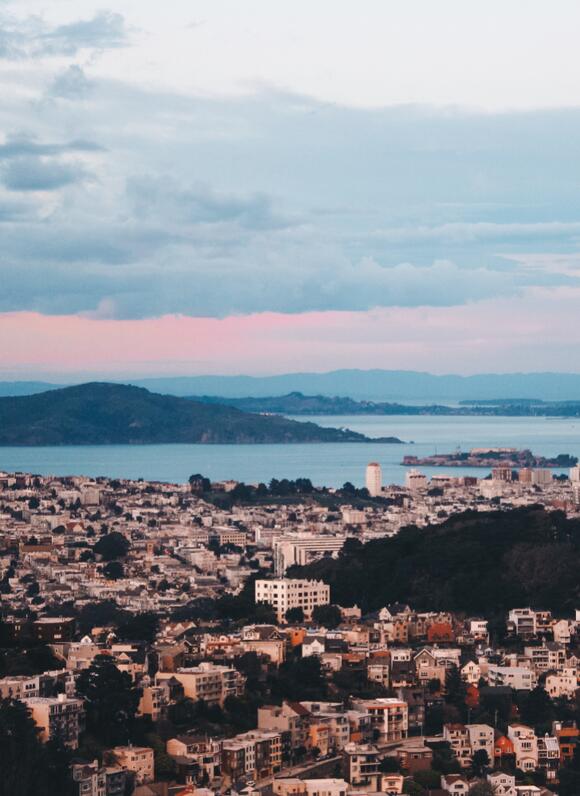 San Francisco's Twin Peaks feature a wildly popular vista point perched on, as the name suggests, two hills near the city's center. The scenic upward drive along curvy roads alone makes Twin Peaks worth a visit, but the panoramic views of the entire city and surrounding bay are truly one of a kind, perhaps offering the most picturesque photo spot in all of San Francisco. 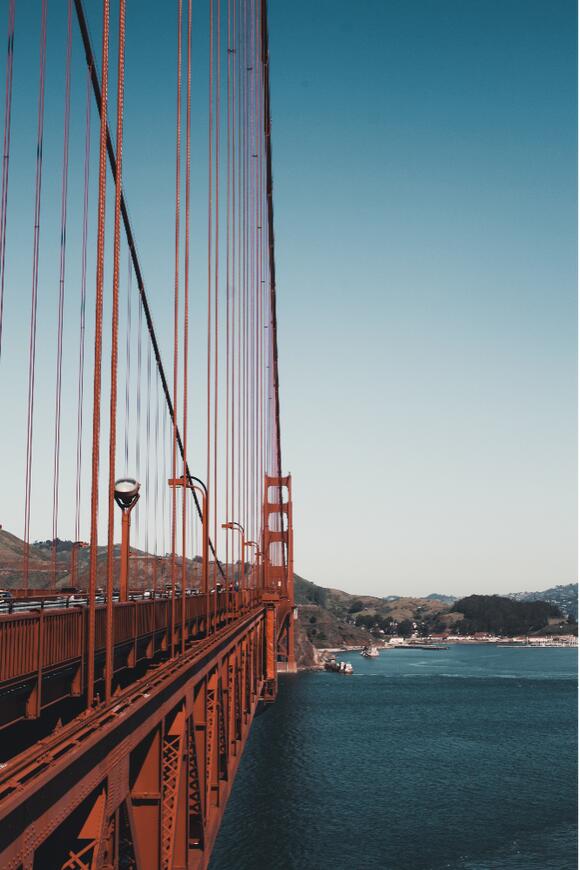 This list wouldn't be complete without mention of the city's most famous landmark, the Golden Gate Bridge. No matter where you're located, this iconic beauty adds that "San Francisco feeling" to any view. I've covered some of the best outlook spots above; This particular view can be seen from the south side of the bridge, looking north towards the Marin Headlands, a hilly peninsula at the southernmost end of Marin County, and Sausalito nestled behind the hills.

Will Life For New Yorkers Ever Go Back to Normal?

Will there even be an "after the pandemic"? Or will life in NYC as we knew it be permanently colored by this health crisis?. You've heard the words "new normal". Nearly a year into the pandemic, we've grown used to the wearing of masks, keeping a distance of six feet to anyone and everyone outside of our household or safety bubble, and dousing our hands in sanatizer multiple times whenever we leave the house.

Kaitlyn, a Columbus-native college senior tells us about her (pre-pandemic) experience participating in a one-month philanthropic program at a kindergarten in Hungary. You completed a four-week philanthropic work placement in Hungary with an organization recommended by your college in Columbus, Ohio. What exactly did you do there?

Things I Miss the Most About Pre-Pandemic NYC Life

One thing the pandemic has taught us is that we often take things for granted. Moments that once made us roll our eyes and shake our heads with frustration, now seem like an appealing tradeoff for being isolated and anxious about our own health and the health of our loved ones.

Philadelphia Artists on Gender Equality in the Art World

Photo by Jose Antonio Gallego Vázquez on Unsplash. Does Gender Play a Role in the Art Scene? Four Local Philadelphia Artists Share Their Personal Experiences. Gender bias and inequality is sadly still widespread in many professional industries. I asked some Philadelphia-based artists which gender they feel dominates the local art scene, and if they've experienced unfair treatment.

The Tales of a Princeton Au Pair

Hi, Katharina from Vienna, Austria! You spent a year as an Au Pair in Princeton, New Jersey. How did that come about, and what’s the process a candidate has to go through to start working as an Au Pair overseas?

I Interviewed An NYC Couchsurfer

Kate, an avid Couchsurfer in the New York City area, answers some common questions people have when considering Couchsurfing for the first time:. DID YOU HAVE SECOND THOUGHTS BEFORE COUCHSURFING FOR THE FIRST TIME?

How I Lived Rent-Free in NYC For 6 Months

If you're wondering how I got by living in Brooklyn without paying a single cent for six whole months, here's my story. Spoiler: It was all thanks to the kindness of others. I was living in New Jersey at the time. My friend Laura and I had planned a fun weekend in New York City. It was a holiday weekend, with the following Monday off. We wanted to stay the night, so that we could spend two full days there without the stress (and cost) of commuting back and forth.

This Brooklyn Woman Lets Strangers Sleep on Her Couch

Disclaimer: The interview refers to pre-pandemic times, and no persons mentioned in this article are currently traveling or hosting travelers. It is strongly advised to refrain from traveling during the pandemic.

One of the things travelers value about Couchsurfing are the connections made with people worldwide. From quick but meaningful encounters to lifelong friendships, these New York City surfers share their fondest memories from their trips to the Big Apple.

From Tennessee to Germany: An International Student Shares His Story

The number of students going abroad is steadily rising. From semesters in Italy to internships in England—the options are endless, and students are taking advantage of them more than ever. Even after graduation, many of them pack their bags and move across the ocean, looking for something they can't find in their U.S. hometowns.

Alex is originally from Sunfield, a tiny Michigan town about an hour outside of Grand Rapids. With a population of about 578, Sunfield is a very small, but well-connected and locally cherished place to live. In 2019, the 22-year-old finally made her long-planned move to Los Angeles—a city of millions.

Copenhagen: A Pioneer for Climate Change

Copenhagen aims to become the world's first climate-neutral capital city by 2025. This goal is supported by the "CPH 2025" climate plan, adopted by the city council in 2009. The city’s CO2 emissions are to be reduced to less than 1.2 million tons, after hitting the initial target of a 20% reduction by 2015 four years early. According to the Danish non-profit organization State of Green, Copenhagen has already reduced its CO2 emissions by 50% since 1995.

Normally, there's no better place to spend Valentine's Day than New York City (unless you can spontaneously jet off to Paris for a romantic overseas weekend). The city is filled with starry-eyed couples, young and old, beautiful displays of flower bouquets on every corner, a faint smell of roses in the cool February air.

Even during a pandemic, when life isn't as busy as it normally is, it can be really hard to stick with healthy habits surrounding exercise and diet. On top of that, we're stuck inside small apartments (most likely extra small if you're living in New York City), with limited options to get fresh air and workouts in.

NYC Lockdown: These Little Habits Could Change Your Life

New Year's resolutions are hard to keep up. Instead of setting unattainable goals, take small steps that go a long way. You’ve probably already made some big goals for the rest of 2021 (and given up on some by now). You’ve promised yourself to go to the gym (at least after the pandemic, while you opt for at-home workouts for the time being), to eat healthier foods, to get more fresh air.

The pandemic took us all by surprise. But once we realized it probably wouldn't go away anytime soon, we started to adapt. Our sense of normalcy changed, and with that, our daily schedules and routines.

If you're struggling with anxiety (perhaps brought on by the pandemic) and feel panicked about being anxious (it's a vicious cycle), don't lose hope. There are ways to make those anxious moments feel less intense.

2020 was a difficult, emotionally draining and anxiety-inducing year in so many ways. There were ups and downs (probably more downs for most of us), then some short glimmers of hope followed by new dismay. New York City went into lockdown after the other, trapping those who decided to stay in their crammed up city apartments.

Why New Year’s Eve Should Be Canceled

There are worse things than spending New Year’s Eve at home. If you ask me, New Year's Eve is majorly overrated. I've always found the event less spectacular than society makes it out to be. And while there's usually nothing wrong with it (I, too, always end up celebrating in one way or another), people are still dead set on making big plans this year. Many are willing to break government-mandated lockdown rules so they can gather in large groups for a fun last night of 2020.