Photo by BBC Creative on Unsplash

Kaitlyn, a Columbus-native college senior tells us about her (pre-pandemic) experience participating in a one-month philanthropic program at a kindergarten in Hungary.

You completed a four-week philanthropic work placement in Hungary with an organization recommended by your college in Columbus, Ohio. What exactly did you do there?

The organization recommended by my college offers different programs for students every year. This particular one was titled "musical education in kindergartens", sending students to kindergartens in different European countries to teach languages and musical activities. I spent four weeks in a Hungarian bilingual kindergarten where we were supposed to speak English with the children as well.

What convinced you to travel to Hungary with this organization?

A professor who was also in charge of the project told me about it and it intrigued me. Six months before the start of the program, the students who signed up met with the coordinators to prepare projects together. In addition to me, seven other students completed the work placement. Two of us went to Norway, two went to Sweden, and another classmate and I chose Hungary. If Hungarian weren’t also my native language, I would have had to take an additional language course. Everything was very well organized. The program provided a weekly stipend to cover accommodation and meals. The supervising staff supported us throughout the whole process.

Where did you live during that month? 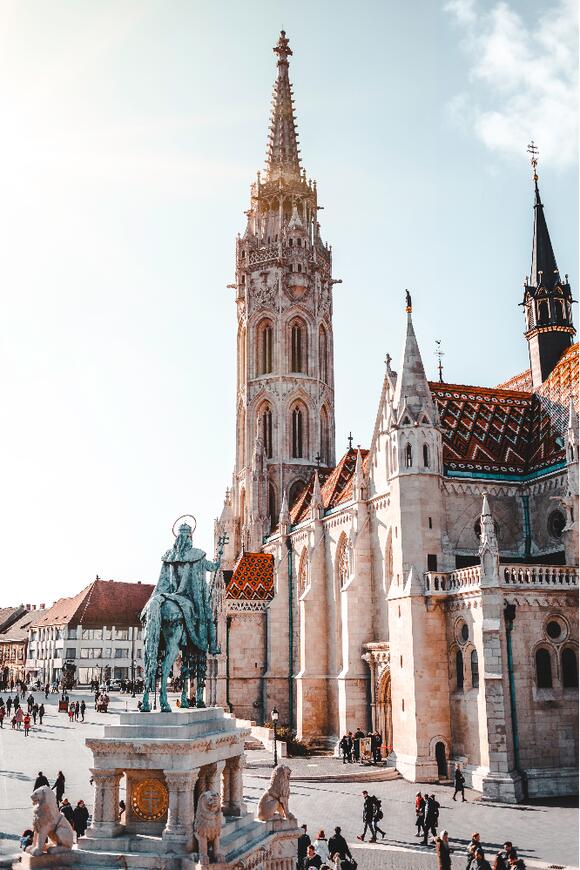 I lived in Budapest. The kindergarten was also located in the city. Even though the public transportation connections were good, it still took us an hour both ways to get to work.

Did you live with other students? How old were they?

I lived with a classmate from Columbus, she was 19 and I was 20 at the time. We got along really well and stayed friends afterwards.

What did a typical day look like in the kindergarten? 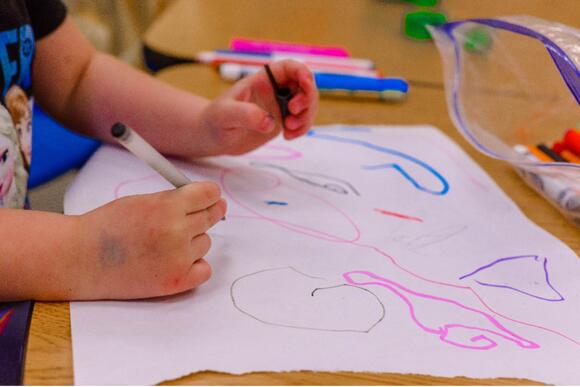 Photo by Erika Fletcher on Unsplash

There were two shifts in kindergarten. The early shift started at 07:00 and went until about 13:00, and the late shift went from 12:00 to about 18:00. These shifts always alternated weekly. On the early shift, we always had to wake up at 05:00. We ate breakfast, took a train to the kindergarten and waited until the children slowly came in for the day. We always started with 15 minutes of playtime in the group, then we had a “morning circle” and ate breakfast together. Later we started rehearsing for our "summer party" project. We rehearsed English and Hungarian songs with the children. At around 10:00, we went out into the garden to play for about two hours. At 12:00, we had lunch, followed by naptime. After waking the children, we had dessert, then we went back out to play some more in the garden when the weather was good. By 6 p.m., all the children were on their way home with their parents.

How did you spend your free time?

On weekends, we always had free time. We went on sightseeing tours in Budapest and saw the city. On free afternoons, we went out for coffee or shopping. I also visited my grandma and cousin who live in Hungary.

What was your best experience during your time in Hungary?

We went on a trip to Margaret Island. There were many playgrounds for children there. A huge fountain played music in intervals. The children sang and danced, it was really beautiful to watch. The summer party on our last day was also really touching—the children became somewhat attached to us. We were both welcomed with such warmth and integrated into the group that it was very hard to say goodbye after four weeks.

How is Hungarian culture different from ours?

The education system holds on to old traditions. Here, kindergarten is more modern, but in terms of daily child activities, it is still quite similar I guess. In general, Budapest is a different world compared to Columbus (laughs).

What did your internship teach you?

Empathy for other cultures and educational systems. I learned not to judge too quickly. When you are in another country, you quickly tend to compare a lot of things with what you know from home. That's not good. You should give everything some time before you form an opinion.

Would you recommend the experience to other college students?

Yes, I’d recommend it to all students. I would always take advantage of such unique opportunities. Even if the experience turns out to be different than you’d hoped, you’ll still have learned a lot from it. I can also recommend Hungary as a country for an internship abroad. It’s a very beautiful place, the people are open and friendly. In addition, the weather is always good. It was a great experience that I can only recommend to others.

What advice can you give to students who are interested in participating in a similar program?

Always stay open to new things. You have to get used to other countries and cultures, but you shouldn't close yourself off or judge too quickly. Just enjoy the ride!

Will Life For New Yorkers Ever Go Back to Normal?

Will there even be an "after the pandemic"? Or will life in NYC as we knew it be permanently colored by this health crisis?. You've heard the words "new normal". Nearly a year into the pandemic, we've grown used to the wearing of masks, keeping a distance of six feet to anyone and everyone outside of our household or safety bubble, and dousing our hands in sanatizer multiple times whenever we leave the house.

With travel being a thing of the past as we approach the second year of the pandemic, it's nice to reminisce about good ol' times and beautiful destinations we can't wait to discover once the future allows it again.

Things I Miss the Most About Pre-Pandemic NYC Life

One thing the pandemic has taught us is that we often take things for granted. Moments that once made us roll our eyes and shake our heads with frustration, now seem like an appealing tradeoff for being isolated and anxious about our own health and the health of our loved ones.

Philadelphia Artists on Gender Equality in the Art World

Photo by Jose Antonio Gallego Vázquez on Unsplash. Does Gender Play a Role in the Art Scene? Four Local Philadelphia Artists Share Their Personal Experiences. Gender bias and inequality is sadly still widespread in many professional industries. I asked some Philadelphia-based artists which gender they feel dominates the local art scene, and if they've experienced unfair treatment.

The Tales of a Princeton Au Pair

Hi, Katharina from Vienna, Austria! You spent a year as an Au Pair in Princeton, New Jersey. How did that come about, and what’s the process a candidate has to go through to start working as an Au Pair overseas?

I Interviewed An NYC Couchsurfer

Kate, an avid Couchsurfer in the New York City area, answers some common questions people have when considering Couchsurfing for the first time:. DID YOU HAVE SECOND THOUGHTS BEFORE COUCHSURFING FOR THE FIRST TIME?

How I Lived Rent-Free in NYC For 6 Months

If you're wondering how I got by living in Brooklyn without paying a single cent for six whole months, here's my story. Spoiler: It was all thanks to the kindness of others. I was living in New Jersey at the time. My friend Laura and I had planned a fun weekend in New York City. It was a holiday weekend, with the following Monday off. We wanted to stay the night, so that we could spend two full days there without the stress (and cost) of commuting back and forth.

This Brooklyn Woman Lets Strangers Sleep on Her Couch

Disclaimer: The interview refers to pre-pandemic times, and no persons mentioned in this article are currently traveling or hosting travelers. It is strongly advised to refrain from traveling during the pandemic.

One of the things travelers value about Couchsurfing are the connections made with people worldwide. From quick but meaningful encounters to lifelong friendships, these New York City surfers share their fondest memories from their trips to the Big Apple.

From Tennessee to Germany: An International Student Shares His Story

The number of students going abroad is steadily rising. From semesters in Italy to internships in England—the options are endless, and students are taking advantage of them more than ever. Even after graduation, many of them pack their bags and move across the ocean, looking for something they can't find in their U.S. hometowns.

Alex is originally from Sunfield, a tiny Michigan town about an hour outside of Grand Rapids. With a population of about 578, Sunfield is a very small, but well-connected and locally cherished place to live. In 2019, the 22-year-old finally made her long-planned move to Los Angeles—a city of millions.

Copenhagen: A Pioneer for Climate Change

Copenhagen aims to become the world's first climate-neutral capital city by 2025. This goal is supported by the "CPH 2025" climate plan, adopted by the city council in 2009. The city’s CO2 emissions are to be reduced to less than 1.2 million tons, after hitting the initial target of a 20% reduction by 2015 four years early. According to the Danish non-profit organization State of Green, Copenhagen has already reduced its CO2 emissions by 50% since 1995.

Normally, there's no better place to spend Valentine's Day than New York City (unless you can spontaneously jet off to Paris for a romantic overseas weekend). The city is filled with starry-eyed couples, young and old, beautiful displays of flower bouquets on every corner, a faint smell of roses in the cool February air.

Even during a pandemic, when life isn't as busy as it normally is, it can be really hard to stick with healthy habits surrounding exercise and diet. On top of that, we're stuck inside small apartments (most likely extra small if you're living in New York City), with limited options to get fresh air and workouts in.

NYC Lockdown: These Little Habits Could Change Your Life

New Year's resolutions are hard to keep up. Instead of setting unattainable goals, take small steps that go a long way. You’ve probably already made some big goals for the rest of 2021 (and given up on some by now). You’ve promised yourself to go to the gym (at least after the pandemic, while you opt for at-home workouts for the time being), to eat healthier foods, to get more fresh air.

The pandemic took us all by surprise. But once we realized it probably wouldn't go away anytime soon, we started to adapt. Our sense of normalcy changed, and with that, our daily schedules and routines.

If you're struggling with anxiety (perhaps brought on by the pandemic) and feel panicked about being anxious (it's a vicious cycle), don't lose hope. There are ways to make those anxious moments feel less intense.

2020 was a difficult, emotionally draining and anxiety-inducing year in so many ways. There were ups and downs (probably more downs for most of us), then some short glimmers of hope followed by new dismay. New York City went into lockdown after the other, trapping those who decided to stay in their crammed up city apartments.

Why New Year’s Eve Should Be Canceled

There are worse things than spending New Year’s Eve at home. If you ask me, New Year's Eve is majorly overrated. I've always found the event less spectacular than society makes it out to be. And while there's usually nothing wrong with it (I, too, always end up celebrating in one way or another), people are still dead set on making big plans this year. Many are willing to break government-mandated lockdown rules so they can gather in large groups for a fun last night of 2020.