If Your Marriage Were a Person, What Would It Say? 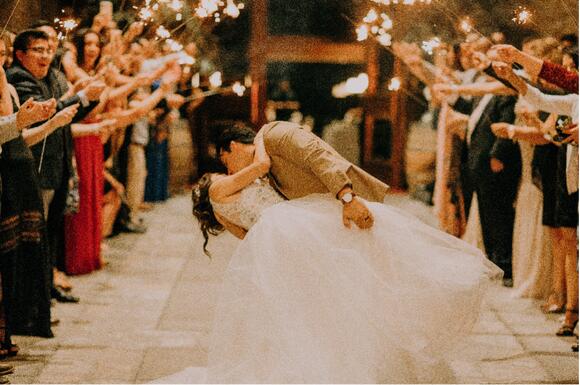 Photo by Edward Cisneros on Unsplash

I believe marriage should come with a break clause.

"I take thee to be my lawful wedded person, to have and to hold, for better for worse, for richer for poorer, in sickness and in health, till death do us part. Should I not work hard enough to uphold my end of the bargain, thou art free to dump me."

I mean, that is what we do in practice. So why do we create this fairytale utopia at the height of our optimism, if we know it’s not going to necessarily be like that?

Full disclosure — I have no intention of getting married — yet. I’m not against the idea per se, but it’s not a life goal, either.

That said, I have been studying the concept more rigorously of late.

Soon after, I got swept away in the most intimate relationship of my adult life. He came to a gyno check with me and said he’d never seen someone’s uterus on a screen before. Our agreed definition for being happy together was, "Do we see ourselves with the other person in 20 years?" Marriage was a hypothetical scenario.

I began to observe the subtext in films like Marriage Story with more interest.

I suppose that, with the concept floating around more frequently, I began to consider it.

Still, my relationship ended, I haven’t received any official wedding invites, and, spoiler alert, Marriage Story is a divorce story.

And it accumulates a few extra layers of complexity if we talk about non-heteronormative coupling.

With all of these conflicting messages and scenarios, I want to ask:

What does marriage want from us?

“You don’t live your life, but life lives you.” - Eckhart Tolle, A New Earth

I believe that, spiritually speaking, we are leaves that grow on the tree of life. When we get crackly enough, the wind carries us and we have no control over what bush we feed with our decaying atoms.

At least that’s what I got from Eckhart’s quote.

No matter how hard we try to control them, relationships have a life of their own.

When they’re infused with sacred vows, I think relationships are more likely to guide us than vice-versa.

Let’s assume for a minute that marriage is not a contract, but a co-created spiritual entity. A thing that exists between, and outside, two loving partners.

If you have a thing for anthropomorphism, you could even imagine this entity as a child — just without a physical body.

Let’s assume that all this entity wants is to survive and to reach its fullest potential of love. But it doesn’t have a say in it. It can’t control whether it achieves its goal or not. It can only observe its own evolution.

So it’s up to the co-creators of this entity to nourish it and listen to it.

It is important to treat marriage as a separate, living thing.

Conversations about you, me, and we are useful. There’s a lot of them around.

There’s also talk about children and what they do to a marriage. That is valid too. But while kids can make a shared life more interesting, I don’t think they can or should be the main nourishment for a marriage.

Let’s get a few more things out of the way. Love languages, attachment styles, sacrifices, compromises, humour, privacy, shared experience — and many other things that are done, learned and worked on. These are also informative.

All these tools are useful for conceptualising and formalising a common language for relationships.

I want to envision marriage as a spiritual entity in and of itself, because this is the only way I can comprehend why, despite true love and strong intentions, it can still fail.

Neither worked out. But they did leave me wondering: if love, desire and shared circumstances are not enough, how do so many people end up spending their lives together?

But if the spotlight shines on a third party, a thing both people care about and promise to protect, then the story looks a whole lot different.

Nobody wants their metaphysical baby to die.

I imagine myself on the ocean shore (because that’s where I want my hypothetical wedding to be).

By my side, the guy I said yes to (interesting enough to make me fall for him, and smart enough to want me forever).

What does marriage want from us?

It wants to know we want it.

It wants to know when it’s not wanted.

It wants us to feed it joy, pain, heartache, hope, peace, illness, laughter.

It wants our whole selves.

It wants our truth.

It wants to be the third person on a long-distance phone call in the middle of the night.

It wants to run when it’s done something bad, but doesn’t.

It wants time with us.

It wants to feel powerful.

It wants us to be comfortable with contradiction.

It wants us to overcome hardship.

It wants to transcend into pure love.

So, I personally find it romantic to envision our vows informing the ocean…

"I promise to spoil our spiritual baby rotten and keep all metaphysical social workers away from our doorstep, so long as we both shall live. Should I not work hard enough to uphold my end of the bargain, thou art free to dump me."

The problem with technology platforms is rooted in start-up culture. Agile. Lean. Market size. Time-to-market. User take-up. Engagement rate. These are terms that help start-ups compete across “how much” and “by when.”

7 Things to Do Outdoors in New York in Spring 2021

(Side note - have dictionaries changed the definition of "zoom" yet?) As we've seen in 2020, falling infection rates cue a loosening of restrictions. In New York City, indoor dining has opened up to 50% capacity starting March 19, and concert and sports venues are expected to start at 20% capacity from April 1st.

When I think about people close to me, I encounter a thick fog, oblivious to anything on the other side. I don’t know what it means to be “close” anymore. If you ask me who I speak to the most, I can think of the top two people.

A Lesson in Accepting Imperfection

I’ve got a shelf full of cosmetics and nowhere to use them. What’s the point in wearing make-up if there is no one in sight to tell me, "Oh I love that color on you"?. I’ve spent years, soon to be decades, of my life doing stuff with someone’s opinion in mind.

My Child's Birth Day Is Uncertain

I don’t know if I want to have kids. I’m 27, but I may as well be 19 or 43. Must there be a number saying when I should consider creating offspring?. First, let’s get the elephant out of the room.

I Am Dying and I Have a Greater Appreciation for Life

If you’ve arrived here expecting a dying woman’s wise take on life, I’m not going to lead you on any further. I neither purport to be wise nor am I imminently dying. But if you’d like to partake in a thought experiment, indulge my dramatic opening a while longer.

I Am Sabotaging My Wellbeing to Care for Others

I don’t want to be productive. I don’t want to create, work, produce, do good. And whatever other terms fit snugly under the umbrella of “Should.”. But my mind won’t let me be. Sometimes I can’t fall asleep at night because random words are flying through my head. Often they’re not words — just letters, trying to form some molecular chain that can save humanity.

I am a child of the ‘90s. I will feign not ignorance, but bliss, in having little clue what J.Lo meant by “Love Don’t Cost a Thing.”. I think love is the most expensive thing out there.

If You Want to Recover, Accept Fear

A year ago today, I had the scariest plane ride of my life. Not because of heavy turbulence, or even early signs of a pandemic. I wasn’t afraid of flying. I was afraid I’d never recover from a syndrome that impaired my brain functions.

If You Want to Improve a Habit, Remove the Shame

I find myself uttering a silent ‘oh no, not again’ when my body fails to deliver as expected. It’s not my favorite way to start the day. But it’s a common one. I’ve been struggling to wake up before 9 a.m. without a headache.

20 Reasons to Trust Blindly in Your Life’s Meaning

A man stopped me yesterday in Leicester Square with this question:. "Do you want to go to Heaven?" A preacher could be heard over the megaphone in the near distance. ‘Jehova’s Witnesses,’ I thought. ‘Maybe Evangelical.’

I Still Trust Men Even Though Some Are Abusive

I’m in the supermarket, listening to my “Made for you” playlist. Of course, “Who Run the World” comes up. Cheering me on as I decide between tomato soups — plain or with basil.

When You Don’t Feel Like Creating, Use Your Craft

Let's explore the intersection of creativity and mental health. On a Zoom coffee morning, actress Susan Wokoma recently said:. “Your creative tools come into play when you don’t feel like creating.” - Susan Wokoma.

If You Think Free Speech is Dying, Take Notes from Romanian Politics

My first ever hashtag was released into the Internet 6 years ago. Believe you me, I would have postponed it if I could. But I had to take a stand. My country’s democracy was up in flames and I was present when the sparks were ignited.

You Don’t Have to Like Someone to Love Them

In my defense, I love my sleep. I love it so much that, over the past 4 weeks, its disrupted patterns made me appreciate every second of slumber. So, naturally, when I came across a virtual retreat with calls beginning at 4 a.m. UK time —

Recovering From Perfectionism: An Addict's Diary

My name is Ioana and I am a perfectionist. I am working hard not to be, but I accept that there may always be a grain of it left at the bottom of the jar. I won’t go into how perfectionism affects my life just yet. I might freak out and not be able to finish this piece.

The “Feeling Paradox” Allows Depression and Happiness to Coexist

This week was the first time I publicly admitted that I have been suffering from depression, anxiety, and a specific form of OCD. Saying “anxiety” and “OCD” wasn’t too scary — as they tend to be exonerated as the loud, hyperactive sibling of high-performance and perfectionism.

White Privilege Makes It Easy to Be Silent

My white fragility is crumbling under the weight of past and current colonialism, black death, and global grief. I don’t expect consolation for my guilt and inadequacy. I expect to be called out for doing the insensitive thing. The ignorant thing. The privileged thing. The racist thing.

I Am a Radical Feminist

There are a few places that are bound to absorb the odor of rotten utterances. The comments section of pretty much any public figure or newspaper. For the most part, I have given the first two a rest.