The COVID-19 Vaccine  -  What Really It Does to Your Body 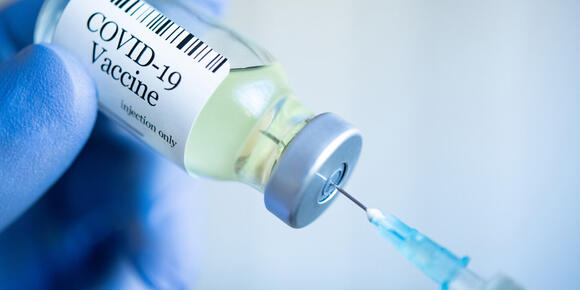 There’s a lot of excitement right now around the record speed vaccines for COVID-19, some of which are already starting distribution in parts of the world. But given that these are mRNA vaccines are a relatively new technology that has not been widely used before.

I wanted to explain how they work and what happens to your body from the moment that a needle touches your skin.

Like vaccines, we’re used to seeing these vaccines will be injected into the upper muscle of your arm but unlike typical vaccines which introduce inactive or weakened forms of a virus, these will release genetic material called messenger RNA.

What exactly does this mRNA do?

Well in a regular cell of your body, you have DNA inside of the nucleus, and this DNA stores all the information and instructions important to the functioning of your cell's body and ultimately makes you.

Inside your cell is machinery that reads through your DNA and transcribes it into mRNA which then leaves the nucleus and goes into your cytoplasm.

And it’s here that the ribosomes and yourselves read the RNA and depending on the specific code to build a series of amino acids which fold in on themselves to make proteins that keep you alive and functioning.

This process is known as translation. In fact, it’s this process that viruses take advantage of in the first place. They insert their own genetic information into you and then your cell machinery unwittingly starts taking that information and building proteins to help create more viruses.

So back to the needle, the mRNA that is being injected into you from the vaccine also carries genetic instructions but in this case, it’s only coding for one small part of the virus instead of the whole thing.

You’ve probably seen SARS CoV2 represented like this with the spikes on it. And it’s this spike protein which on its own is harmless that the vaccine's mRNA codes for.

The mRNA makes its way into the cytoplasm of your cells where the ribosomes read the information and start to create the spikeD proteins.

Once the protein is made, it goes to the cell membrane and then your cell breaks down and destroys the injected mRNA instructions.

What good does having a tiny fragment of the viral spike in your body do?

Well, it gives your body and more importantly, your immune system, a preview of what the virus looks like without causing disease. Suddenly your antibodies will notice it and go, well, this doesn’t belong here which triggers an immune response to recognize and prepare your body for the real thing without ever having to come in contact with the actual virus itself.

Your immune system essentially gets a headstart by creating powerful antibodies that can neutralize and kill the real virus. And this antibody memory is stored in your B cells so that if you’re ever infected in the future with the SARS CoV 2 virus, your body now has the upper hand.

This is known as an adaptive immune response. Your body has already seen these spike proteins before and therefore it already knows what to do.

Essentially, these mRNA vaccines allow your body to protect itself from a future infection without ever having to risk the consequences of getting the COVID-19.

Why haven’t mRNA vaccines been used before?

While they are relatively new researchers have actually been experimenting with them for decades but in the past, they’ve been very unstable. Enzymes in your body would break down the mRNA quickly so they needed to be packaged well.

The ones being released now have the mRNA encased in lipid nanoparticles which essentially protect the mRNA from being degraded. Since there are more unstable than other types of vaccines, they have to be kept cold.

For example, the Pfizer vaccine has to be stored at minus 70 degrees Celsius and at normal refrigerated temperatures can only last five days. Of course, a global pandemic has certainly increased the funding and resources going towards these types of vaccines which has helped to accelerate their development.

What makes these vaccines so appealing is that, unlike other vaccines, they can be made in a lab with readily available materials and actually made much quicker than other types of vaccines.

Instead of fully developing non-infectious viruses and then injecting them, these mRNA vaccines can sort of pass many hurdles by using your own body in an ingenious way.

It’s also far more cost-effective to create mRNA molecules rather than the proteins themselves and also a lot more scalable which is helpful when we are in a global pandemic waiting for a vaccine.

And given that it’s a relatively new technology, should you be concerned at all?

Well, that’s what these initial trial stages have been for. Not only to test whether or not they work and cause immunity but to make sure they have minimal side effects.

As of now, around 70,000 people have been given these vaccines with no serious concerns, a caveat being that the full research hasn’t been published yet. But it’s important to remember that just because it’s safe doesn’t mean there won’t be any soreness or pain.

Some recipients did report aches and pains and as of now, you’ll need to receive two shots to ensure efficacy. I saw a really great analogy by professor Shane Crotty who works in vaccine research and he said,

“It’s not unlike going to the gym and getting exercise and really sore muscles. A bit of pain can be a positive sign that good things are happening. Sometimes you have to earn your immunity, just like you have to earn those biceps you wanted so bad.”

I hope that all this information was useful and concise and educational for you ’cause it does sort of help make things seem less unknown and scary in a very strange time.

Highly creative people often feel misplaced in our logical, linear world. But they feel different for a reason. Research confirms that their brains have structural differences that cause them to think and act uniquely.

How a Few Minutes Meditation A Day Can Change Your Life

Meditation has been around for thousands of years. It’s often seen as a spiritual practice, so it can be difficult to think of it as something with proven, scientific benefits. But the reality is, meditation isn’t just about connecting with and healing your soul!

What To Expect From The Upcoming Apple's Car - Recent Rumors

Apple typically doesn’t let any information slip about upcoming products, but the Apple Car has been a huge exception. With the first rumor about its development dating back to 2015.