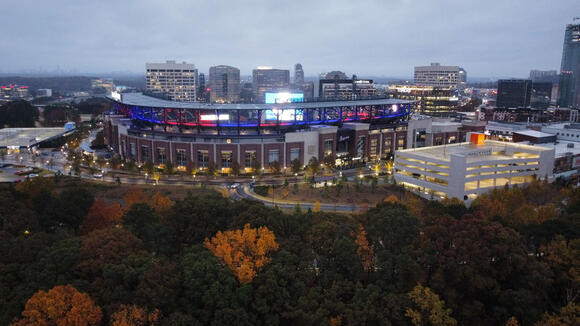 Truist Park, formerly SunTrust, will host the 2021 NLCS at some point in time.Creative Commons Attribution 2.0

Nothing in the world of sports can possibly be as confusing as the postseason schedule of Major League Baseball.

In an unabashed effort to accommodate the lords of television, the game has devised a complex, confusing, and inexplicable schedule that even Einstein couldn’t understand.

For example, any wild-card team that advances always has to yield home-field advantage to its opponent. Right?

Consider the case of the Atlanta Braves, champions of the National League East.

After they beat the Milwaukee Braves in a four-game Division Series, the Braves didn’t know whether they would host the NL Championship Series Saturday or have to fly to San Francisco for the first two games.

That was to be determined by the outcome of the Dodgers-Giants game that started so late Thursday night — at least on East Coast time — that its outcome figured not to be settled before the wee hours of Friday morning.

If the Giants, champions of the NL West won, the NLCS would open at Oracle Park Saturday, then revert to Atlanta Tuesday for the middle three games in the best-of-seven set.

But if the Dodgers won, the series would open in Atlanta because L.A. is the league’s wild-card team — despite 106 wins, just one less than the Giants.

Under that scenario, the Dodgers would have to fly to the East Coast and play Saturday, with the first two and last two games scheduled for Truist Park in Atlanta.

Such uncertainty makes life crazy for the media members, fans, sponsors, and other out-of-towners who need to go to the games.

How can anyone book air tickets, hotels, and rental cars, not to mention make plans for their suddenly-disrupted personal loves, if they don’t know what’s happening more than 24 hours in advance? And suppose the vagaries of weather, such as pea-soup fog on San Francisco Bay, force an unexpected postponement?

But how about this for a plot-twister: should the Boston Red Sox beat the Houston Astros in the American League Championship Series, they would host the start of the World Series — even though they, like the Dodgers, got where they are by winning a wild-card game.

Apparently, the rule preventing wild-card winners from having home-field advantage doesn’t apply to the World Series. In that case, the team with the best record gets the advantage in the best-of-seven match.

That means Boston, which won 95 games, has the advantage over Atlanta, which won 88.

Too bad they didn’t have the exact same number of victories. Then what? Would Rob Manfred order a coin flip?

Things made more sense when the leagues alternated home-field advantage, with the AL getting it one year and the NL the next. At least there was continuity and people knew what was coming before it hit them between the eyes.

Baseball also needs to let people know the starting time of its games will be in advance. With four different networks covering the playoffs, that should be a no-brainer.

It should also be a no-brainer to play late-October World Series games during daylight hours on weekends. Conditions are best then and that’s what the public should be seeing.

We all saw what could happen when cold and snow disrupted the only World Series played in Denver, in 2007. It won’t snow in any of this year’s Series cities but that doesn’t mean it won’t be cold, windy, and unpleasant — especially if the last round reaches San Francisco.

As a rabid Braves fan since 1957, I have seen the team play in Milwaukee County Stadium, Atlanta Fulton County Stadium, Turner Field, and Truist Park (nee Sun Trust Park). But I truly have regrets about missing games in Braves Field, home of the Boston Braves from 1915-1952.

Who really belongs among next year’s new eligibles for the Hall of Fame?

Very well, I surrender. Since it seemed half or more of baseball world couldn’t wait to start speculating on next year’s Hall of Fame class—it took, oh, about five seconds after Scott Rolen was elected during January’s final full week—I might as well join the fun. (Don’t go there: Rolen’s the number ten third baseman, ever, says Baseball Reference, and say I.)

Had he not passed away two years ago, Hank Aaron would have turned 89 tomorrow. Ironically, he was born only one day ahead of Babe Ruth, whose long-standing career home run record he topped on April 8, 1974.

On This Day In 1999, The Marlins Made Their Greatest Trade Ever

Greatest trade in team history? It’s a bold claim to make, whatever the team under discussion may be. There’s a lot to consider. A lot of history to sift through. For the Miami Marlins though? It’s a no-doubter when it comes to naming the trade worthy of the title. It also happened 24 years ago to the day on February 1, 1999.

The Colorado Rockies Have Been Busier Than You Think

It is incredibly easy to dunk on the Colorado Rockies, and fun too. The Rockies play on a mountain unto themselves, literally. Nestled a mile above sea level, the confines of Coors Field harbor one of the more baffling and sometimes irritating teams in all of baseball. Entering their 30th season, the Rockies have yet to win a division title and have made the playoffs just five times, most recently in 2018. Rebuilding is not in their copy of Webster’s Dictionary, instead, they opt for a perpetual state of mediocrity under the guise of contention.

Kim Ng, the only female GM in the major leagues, is making her mark with the Miami Marlins. But she faces the double whammy of tight purse-strings and a division dominated by three juggernauts: the National League champion Philadelphia Phillies, the 101-win New York Mets, and the Atlanta Braves, seeking their sixth consecutive division title — the longest active streak in the majors.

Offseason evaluation of the Detroit Tigers

It has been a relatively quiet off-season for the Detroit Tigers. The biggest change for the team has been in the “behind the scenes” areas starting with the hiring of Scott Harris to be the new President of Baseball Operations. While many fans were hoping the Tigers would jump into the free-agent frenzy, they have been pretty conservative in both their signings and trades so far.

No…not THAT season, the one with the fat dude, the wee folk, flying mammals, free stuff, and football on every network. No, that season has passed into memory, gone at least until next Halloween.

Less than an hour after this year’s Hall of Fame results were broadcast on MLB Network Tuesday, the New Jersey chapter of SABR held a no-holds-barred Zoom roundtable to discuss who was overlooked — not only by the baseball writers but also the various veterans (oops, eras) committees.

Scott Rolen And The Broken Hall Of Fame

Scott Rolen was announced Tuesday as the only member of the 2023 Baseball Writers’ Association of America Hall of Fame class, garnering 76.3 percent of the vote and getting into the Hall by just five votes.

On Saturday the news of the death of legendary Oakland (and Kansas City) A’s third baseman Sal Bando broke. Coming on the heels of Ray Fosse’s passing in 2021, it was another tough day for A’s fans.

Cal Ripken, Jr. did it first: Rookie of the Year one year and MVP the next. The future Hall of Famer did it while playing for the Baltimore Orioles in 1982 and 1983. Ryan Howard (Phillies) followed suit in 2006, winning the MVP trophy a year after taking top rookie honors and becoming the first National Leaguer to do that.

Cardinals’ Lars Nootbaar is Ready to be Breakout Star

It wasn’t all that long ago that St. Louis Cardinals’ outfielder Lars Nootbaar was just another one of those Cardinals prospects who flew under everyone’s radar, but soon became a cult favorite among the fanbase. Now entering the 2023 season, Major League Baseball is taking notice of the potential Nootbaar possesses.

The World Baseball Classic is neither. It doesn’t involved the whole world, does include entities that aren’t actually countries [Puerto Rico is a U.S. territory], and presents the biggest conflict of interest in baseball history.

On July 11, 1954, between games of a doubleheader featuring the Boston Red Sox and Philadelphia Athletics, rookie pitcher Bob Trice walked into A’s manager Eddie Joost’s office in the locker room at Connie Mack Stadium and made an unusual request.

Since the weekend editions of Here’s The Pitch invariably include two feature articles, it took a little longer to find five 2022 pieces that most deserved reprinting. Subject matter varied widely, from Charlie Finley's cousin to the resurrection of a moribund ballpark that once housed Negro League greats.

A short, thoughtful look at baseball’s first two weeks of 2023

The Trevor Bauer saga ended for now with the Dodgers designating the louse for assignment. It took the Dodgers almost two weeks from the moment his suspension was lifted at time served to decide something they had eons to decide. I could be wrong, but it didn’t take that long for New York to make up its mind and finally build the Second Avenue Subway.

Milo and Harry: a Match Not Made in Baseball Heaven

The seventh inning was REALLY a stretch when Harry Caray and Milo Hamilton shared the broadcast booth of the Chicago Cubs in the ‘80s. Remember that song Harry used to sing? Here's a little bit of history on how it all got started: