Musicfest on the Water Draws Thousands 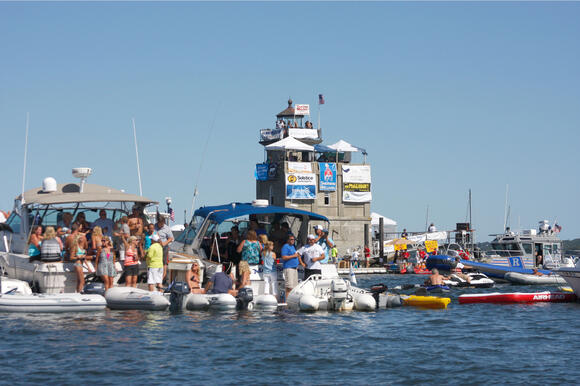 The Huntington Lighthouse Musicfest brings together music fans, boaters and history aficionados drawn by their interest in preserving the lighthouse situated in Huntington Harbor.

Organizers say the Sept. 4 event on the North Shore of Long Island, NY, is unique, the only such festival conducted entirely at a working lighthouse on the water.

The end of summer show, held under the typically sunny, deep blue skies of September in New York, brings in boaters, kayakers, paddleboarders and others. It features a variety of music, most especially traditional rock.

The goal is to have fun and enjoy the beautiful views of the harbor, lighthouse and shreline, while raising funds for the preservation of the Beaux Art style lighthouse, which was completed in 1912. The structure sits on a foundation of reinforced concrete, which was originally constructed on land and floated out into the harbor, and a wall of large stones thrown together at its base.

The musicfest began as a way to raise money for the operational lighthouse, which had begun to deteriorate after its signal operation was made automatic. In 1988, it was added to the National Register for Historic Buildings.

In the past, the musicfest has drawn as many as 7,000 people who arrive in their boats for the event, and then spend the day eating, listening to some of their favorite tunes, and diving and swimming from their boats while the bands rock on. The crowds are friendly as boaters share space on the water and a love of music.

It is scheduled this year to run from 11 a.m. to 6 p.m. After last year's shutdown of nearly all events, including the musicfest, organizers say they're ready to party on. And they hope everyone else is, too.

Manuel Esteban, a Republican and Conservative, is challenging Democrat Susan Berland, the incumbent and majority leader, in the 16th District in the Suffolk County Legislature.

Northport Village authorities Monday condemned a recent series of bias incidents that have occurred around the village. On Sunday, a performer in “Smokey Joe’s” at Engeman Theater reported that they were the target of a racial slur, shouted by a white man in a car, after the cast member left the matinee show and was walking along Main Street. In response, the theater canceled Sunday night’s show.

Columbus Honored With Wreath, Support for Role in History

Italian Americans and other political and business leaders honored Christopher Columbus Thursday, calling him the founder of America and a cultural icon, as they gathered at his statue on Main Street in Huntington to help launch the three-day weekend that celebrates his birth.

A rabbi whose Hebrew school students were accosted by a man during a Rosh Hashanah ceremony in Northport has asked for police presence next year. Rabbi Ian J. Silverman of the East Northport Jewish Center said pupils were participating in a ceremony Sept.14 involving the casting of bread into water when a man stepped out of his car and began "scolding us about how could we have possibly rejected the Savior," Silverman said.

Businesses and other institutions around Huntington are scheduling job fairs and recruitment drives to staff up. A cyber security analyst is an experienced, senior level, hands-on practitioner and representative of the cybersecurity defense team. The role is technical, and candidates must possess a solid understanding of information security and preferably have held positions in cybersecurity and systems administration. The role also requires an understanding of business and governance process.

On the eve of enforcement of a Covid-19 vaccination mandate for healthcare workers, a group of people who oppose it protested at the Northport home of CEO Michael Dowling Sunday night.

The Town of Huntington honored its World War II veterans Sunday, adding the names of 365 Huntington veterans of the war to its memorial in front of Town Hall. Veterans whose names were added Sunday and attended the ceremony were Jack Stahl, Peter O'Donnell, Seymour Perlmutter, Robert Corcoran and Nick Haridopolos, as did Mortimer Roberts, whose name was already on the plaque. As their names were read out, the veterans stood or raised their hands to acknowledge the applause of the crowd.

A Turkish national pleaded guilty Friday in federal court in Central Islip to his role in a “birth tourism” scheme. Ibrahim Aksakal, 49, who lives in East Patchogue, pleaded guilty to conspiring to commit health care and wire fraud. The scheme enabled pregnant Turkish women fraudulently entering the United States using tourist and business visas to give birth so that their children would obtain United States citizenship and medical benefits.

Republicans, Cook Battle Over His Role in November Race

Republican anger at Gene Cook’s decision to run for town supervisor against their candidate, Ed Smyth, continues to ratchet up. On Tuesday, Republican Chairman Tom McNally emailed party members to accuse Cook of working with Democrats to undermine Smyth, a charge he has made previously. This time, he included photos of the home of a Democratic leader that displayed signs for Cook alongside signs for Democratic candidate Rebecca Sanin.

New York Gov. Kathy Hochul announced plans Saturday to deal with possible medical staffing issues resulting from the Covid-19 vaccine deadline on Monday. All healthcare workers in New York State must be vaccinated by Monday or face losing their jobs.

The Andrew W. Mellon Foundation has awarded a $1-million grant to the historic John and Alice Coltrane Home in Dix Hills. The multi-year grant will continue the preservation of the home of the influential musicians, increase organizational capacity, expand programmatic offerings and allow the hiring of a full-time executive director to lead the project.

A St. Anthony's High School student is one of several tri-state football players nominated for the 2021 USA Football Heart of a Giant Award, presented by the Hospital for Special Surgery and the New York Giants.

A five-unit shopping center at 1802 E Jericho Tpke., Huntington, is listed for sale at $2,188,000. The one-story building sits on .50 acre of space at the intersection of East Jericho Turnpike and East Deer Park Avenue.

Gov. Kathy Hochul announced Sunday that the state is taking several steps to try to address the shortage of school bus drivers affecting numerous school districts around the state.

The Huntington Town Board approved a measure earlier this week that was proposed by Supervisor Chad A. Lupinacci in July that town leaders expect will encourage the occupation or turnover of ownership of zombie homes, problem properties and vacant storefronts. The town will impose escalating penalties for each year a property is vacant and listed on the Vacant Building Registry. Religious organizations will continue to be exempt from paying the vacant building registration fee.

Gov. Kathy Hochul said Sunday that Suffolk and Sullivan Counties have been approved for the previously declared major Disaster Declaration from the flooding resulting from Hurricane Ida.

Lloyd Harbor Cleaning Up After Remnants of Ida Blow Through

Cleanup was underway Thursday in Lloyd Harbor from the heavy rain and wind damage left by the remnants of Tropical Storm that socked the area overnight. Huntington FIre Department district manager Bruce Smith said that the wind may have reached 78 MPH but the National Weather Service has not determined whether the storm was a tornado.