According to police, four men were sitting in a vehicle at the apartment complex. Six suspects ran up to the vehicle and started shooting inside the car.

While initial reports initially indicated three people were shot, it turned out to only be one. This person was taken to a local trauma center after potentially suffering a spinal injury. He is expected to survive.

While the investigation is still in its early stages and ongoing, neighbors believe this was in retaliation for a fight that occurred last week.

Ashley Carrizal who lives at the apartments told us in an interview that one of the suspects tried to enter a resident's home at one point but was unsuccessful in doing so because the door was locked. The other suspects are believed to have run across the street according to neighbors.

Upon learning that three people may have been shot, Carrizal said "it is horrible, it is the holidays... it's already bad.. people are struggling to make ends meet.. and people hardly have any money to buy Christmas presents this year for their children." Carrizal believes people are desperate for money in Houston and this ends up causing them to harm others.

If you have any information about the case or the suspects, you are urged to contact the Houston Police Department or Crime Stoppers at 713-222-TIPS. We will keep you updated on any developments in this case. 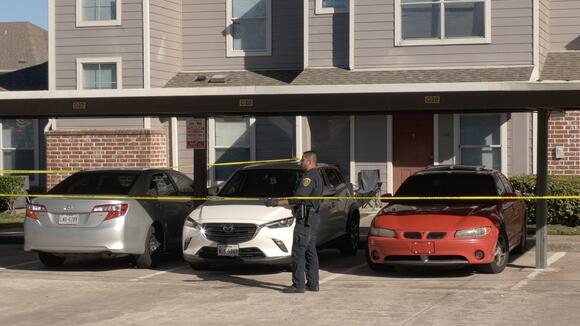 January 24, 2023 - A 20-year-old Houston man has been charged with capital murder after investigators were able to recently obtain new information that connected him to a murder that occurred back in 2022.

Harris County Precinct 4 arrested a man when they learned that he was wanted for arson in connection with an insurance fraud case in Harris County. According to court documents, arson investigators with the Harris County Fire Marshall's office were called out to the scene of a vehicle fire in the 19600 block of Tegle Rd. in Tomball, TX on May 29, 2021, at about 5:40 a.m. During their investigation, investigators found that the fire started in the passenger compartment and determined that someone applied an open flame to ignitable materials that were stored inside. A TX DPS Trooper was then able to identify the car as belonging to Steven Smith and noticed there was a lien on the vehicle in the amount of $15,537.43.

A man is being charged with murder after being suspected of killing a man nearly three years ago outside of a southeast Houston convenience store. According to court documents, police responded to a report of a shooting at a convenience store located in the 9200 block of Nathaniel Street at about 7 p.m. on January 30, 2020. Police found two victims. Pedro Ontiveros-Vaca, who police found sitting in his car was pronounced deceased at the scene by paramedics with the Houston Fire Department. The other victim was taken to a local hospital after sustaining a gunshot wound to his leg. After investigating, investigators identified two suspects.

January 5, 2023 - According to a press release by the Montgomery County Sheriff's office, multiple law enforcement agencies are investigating a fatality crash that occurred during a high-speed chase in the 13400 block of Rogers Rd in Willis, TX around 8:30 p.m.

A local car dealership is being sued after it allowed one of its employees to borrow a truck and drive it home. That employee ended up hitting and killing a pedestrian, just blocks away from the car dealership.

A man has now been arrested and is in custody after shooting another man multiple times in the parking lot of a convenience store in broad daylight late last week after an argument.

A mother is suing an apartment complex and gas station after her son was shot by a customer and left to die behind a southeast Houston gas station near a dumpster. According to the lawsuit, on November 12, 2022, the victim, Satisfield Demarcus Landry was involved in an argument with another customer. Both employees and managers heard the argument and “did nothing to intervene” despite the other customer (who would end up being Landry’s killer) threatening Landry’s life several times. After Landry finished his purchase, he left the store. The customer who was threatening Landry was waiting behind the gas station, at the Wesley Square Apartments and shot Landry before fleeing.

A Houston area church is being sued by a mother who alleges officials at the church tried to cover up the sexual abuse of minors by a Youth Pastor. The church, Champion Forest Baptist church is part of the Southern Baptist Convention, which the lawsuit alleges has a history of covering up abuse in its ranks. One of their ex-youth pastors even pleaded guilty to sexual abuse and sexual assault allegations back in 2018.

The family of a Houston woman has filed a wrongful death lawsuit in Harris County District Court after they say a toxic mold infestation took over the woman’s home when the homeowners association failed to make sure repairs were done correctly. The woman later developed cancer and died because of the mold the lawsuit alleges.

Houston man kills woman while out on $1k bond

A Houston man turned himself into police after he allegedly shot and killed a woman in Houston's Montrose area on Sunday. Brandon McKinney MugshotPhoto byHouston Police Department.

December 17, 2022 - A quadruple shooting at a Houston club left one dead and three others injured Saturday morning after an argument of some sort broke out inside the club between a man and a woman.

Two teens shot, one dies at hospital after attempting a robbery at a gas station in Harris County

December 11, 2022 - Two teens were shot at a gas station while attempting a robbery in north Harris county. One of these teens, a 16-year-old died at the hospital after succumbing to his injuries.

December 10, 2022 - A homeowner was shot and killed shortly after midnight when he confronted two suspects that he found in his backyard when he heard some noise. According to Lt. Willkens of the Houston Police Department, the homeowner accidentally stumbled across the suspects when he heard noises in the backyard and went to go investigate.

The Houston Police Department's Robbery Division was able to find and arrest a man who shot his Uber driver after the driver refused to take him to a new destination. Turns out, he was out on bond for assaulting a pregnant woman just a month prior to shooting his Uber driver.

First responders were busy on the east side of Houston after at least three people were shot within the span of one hour. 1st shooting - Woman shot during a drive-by shooting in northeast Houston.

Police have released a photo of the suspect that shot a Uber driver after attempting to rob him when he refused to take him and his companion to a new destination. The incident happened shortly after 10 p.m. on Sunday, November 27, 2022. Police have identified Manny Diaz-Massa, shown below (left) as the shooter.

November 28, 2022 - According to Lt. J.P. Horelica of the Houston Police Department, officers responded to a report of a major accident in the 9600 block of the Southwest Freeway in Houston.

An Uber driver in Houston is recovering in the hospital tonight after he refused to take a rider to a new destination. According to HPD, the incident happened just after 10 p.m. at the Shell Gas Station located at 2819 Quitman St. near the Eastex Freeway. Police say the Uber driver had two passengers in the backseat and he was transporting them to their destination after picking them up.