Police say the suspect and the mother, who was walking with her baby at the time, were arguing when he decided to assault her. A group of samaritans saw her being attacked and decided to attack the suspect. After the attack, the suspect came back with a gun and fired multiple rounds into a crowd outside AM Mini Mart in Southeast Houston. Two victims were transported to a local hospital.

Lt. J.P. Horelica of the Houston Police Department stated in a press briefing that southeast patrol units responded to the shooting and found two victims.

According to Lt. Horelica, it originally started as a domestic dispute, around 12:40 a.m. on July 18, 2022, between a male and a female walking with her baby down Cullen.

As they were walking past the store, the man attacked the mother. A group of good samaritans at the store noticed this, and intervened, attacking the man.

The male who assaulted the female left the location after being attacked and came back a short time later in a black Chevy Tahoe. He opened fire on the crowd of people gathered outside the store before taking off.

The shooter struck one male in the back and a leg. Another woman was struck in her leg. Paramedics rushed both victims to the hospital. The man is in critical condition, while the female is currently in stable condition. Bullet holes can be seen on a red Dodge Ram pickup truck that was in the store parking lot. A silver Chevy Cruze also had a flat tire after the tire was struck by a bullet.

While the suspect was firing into the crowd, another party opened fire on the suspect. Both fled the scene and police are currently searching for them.

The mother and the child both left the scene before the shooting. Police are working to track them down, but both are thought to be safe at this time. The Houston Police Department will be leading the investigation. 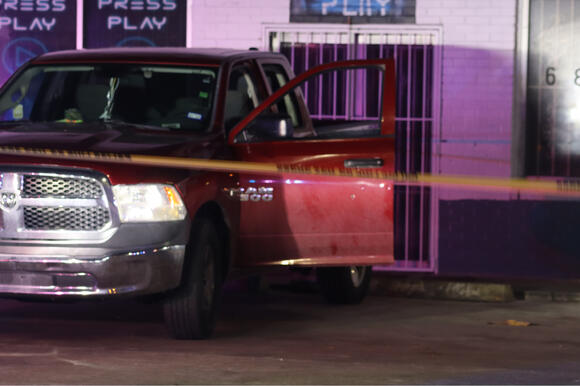 According to Assistant Chief Wyatt Martin of the Houston Police Department, at about 2:39 a.m. officers responded to a call in the 5500 block of Richmond Avenue, near Chimney Rock in southwest Houston.

A military recruiter shot and killed his wife, and injured NCIS agent before being killed by deputies in Harris County

According to Sheriff Ed Gonzalez, NCIS agents were interviewing a woman about domestic abuse allegations she brought against her husband, a military recruiter when he shot and killed her before turning the weapon toward NCIS agents who were there conducting the interview, injuring one of them.

According to Lt. R. Raska, of the Houston Police Department, North Shepherd officers responded to a report of a shooting at the Oak Gardens apartment complex located at 5625 Antoine, near W. Tidwell Rd. Officers were dispatched at about 11:28 p.m. in regards to a shooting. At the same time, several notifications of shots being fired were reported by the "Shotspotter" alert system.

Good Samaritan provides CPR and calls 911 after double shooting in southwest Houston, according to HPD

Two victims were found at an intersection in southwest Houston according to the Houston Police Department after a Good Samaritan stopped to give them CPR and call 911. Both of the victims have been transported to a local hospital where they are undergoing surgery and are in serious condition.

HPD: Suspect shot at Doneraki's in Gulfgate after charging at an officer with a tire iron

An officer-involved shooting occurred at the Tex-Mex restaurant, Doneraki located at 300 Gulfgate Mall in southeast Houston after police say the suspect charged toward an officer with a tire iron.

At least three people are dead, and four others are injured in shootings that occurred in the Houston area overnight. Most of these shootings occurred in northeast Houston. The first of which was a woman who was shot in the 3500 block of Liberty Rd @ Staples St. just after 8 p.m. She was taken to the hospital via ambulance where she was later pronounced deceased.

Three suspects were arrested after a short vehicle pursuit in Houston that started around midnight. During the pursuit, which lasted about fifteen minutes, the driver intentionally rammed officers' patrol vehicles and was shot by a police officer after he brandished a weapon as he fled on foot.

Sheriff: Deputy Omar Ursin was murdered by two suspects who were out on bond for prior murder charges

After news spread of the passing of Queen Elizabeth II, Mayor Sylvester Turner announced via a press statement that City Hall will be lit up in red, white, and blue to honor the late Queen.

Several vehicles were involved in an accident in the 4800 block of East Mount Houston, near the Eastex freeway that occurred around 10 p.m. on September 2, 2022. At least one of these hit a utility pole at some point during the accident causing severe damage to one of the vehicles, a dark-colored Chevrolet Tahoe that was involved.

The Humble Police Department is looking for a suspect that was involved in a shooting outside a busy Mcdonald’s late Thursday night. The shooting, which occurred on September 1, 2022, shortly after 10 p.m., took place at the McDonald’s located on the corner of Wilson and Will Clayton Pkwy.

Update: The Officer has been identified as Deputy Constable Omar Ursin, a Harris County Precinct 3 Constable. An officer driving down Madera Run Pkwy in was shot and killed by an unknown suspect Sunday evening in the Groves neighborhood of Atascocita, Texas, a suburb of Houston, located in northeast Harris County.

Caught on dashcam: Houston Uber driver is shaken after man pulls out an assault rifle and aims it at her in the Heights

A Houston Uber driver is shaken after she had a man get out of his vehicle and pointed an assault rifle toward her for apparently no reason. She gave us permission to share her video:

Four dead after suspect sets fire to a house, shoots at firefighters, and is killed by a Houston Police Officer

In a court ruling today, a federal judge in Texas signed an order that effectively blocks a law that was enacted after the Uvalde massacre. The law made it a crime for young adults between 18 and 20 years old from carrying handguns for self-defense outside of their homes.

A Shooting near Humble Middle School causes a lockdown, all students are safe and accounted for

Humble ISD sent out an e-mail to parents this morning advising them that both Humble Middle School and Whispering Pines Elementary were placed in "Secure the Perimeter Status" Thursday morning. This was triggered by a report of a bullet entering a nearby resident's home.

Update: Serial Road Rager in the Heights has been arrested

Kenneth A. Ward, of Houston, TX has been arrested in connection with a road rage incident that happened on August 3, 2022 for a felony charge of aggravated assault. The case, which has been filed in Harris County District Court (Case No. 178392901010), gives us a bit more info about what led up to the chase.

A man is fighting for his life after he was shot multiple times in front of his wife. The couple had just come back home from a bar in southeast Houston, according to Houston Police. This shooting occurred just outside of the Quail Meadows Apartments on the corner of Telephone Rd. and Red Robin Ln.

Three suspects were detained after leading police on a short chase in Houston before losing a tire and bailing out. Officers with the Houston Police Department responded to a report of a burglary at the Foot Locker located in the 4400 block of the North Fwy in Houston. The suspects made their getaway around 1:30 a.m. The suspects at that point drove onto I-45, the North Fwy headed southbound and made their way to US-59, the Eastex Freeway. At one point, one of their tires came off and they decided to bail out in the 2200 block of the Eastex Freeway at Campbell. Two of the suspects were quickly detained by officers following them. One of them made their way into the neighborhood and a short manhunt ensued.