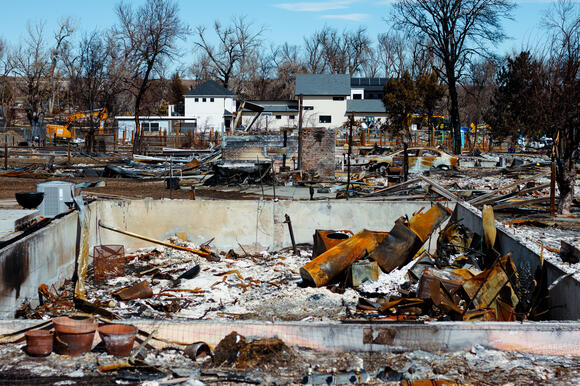 A neighborhood in Marshall following the December fire.Heather Willard.

(Boulder, Colo.) The Boulder County Sheriff’s Office announced Thursday that its investigation into what caused the Marshall Fire continues and likely will take “several more months.”

The fire, the most destructive in Colorado’s history, burned nearly 1,000 homes and thousands of acres in a matter of hours.

“Investigators have been working with experts from around the country to analyze the evidence and to identify the possible cause and origin of the fire,” the sheriff’s office said in a news release. “That work is ongoing and will take time. Unfortunately, the Sheriff’s Office cannot share specific information regarding an open investigation.”

Once the investigation is complete, sheriff’s detectives will present evidence to the District Attorney’s Office, who will decide whether to file charges.

Heather Willard / NewsBreak Denver / Nov. 23, 2022. (Douglas County, Colo.) Coloradans have supported nonprofits across the state on the first Tuesday of December through Colorado Gives Day for over a decade.

Heather Willard / NewsBreak Denver / Nov. 21, 2022. (Colorado) Be on the lookout for online shopping scams this holiday season. A new study from Social Catfish shows that Coloradans are especially susceptible to scams — with state residents experiencing the 16th most online shopping scams per resident.

Heather Willard / NewsBreak Denver / Nov. 14, 2022. (Douglas County, Colo.) Winter weather is here and many vehicle owners may turn to “puffing,” or starting their car to warm the interior before they’re ready to drive the vehicle.