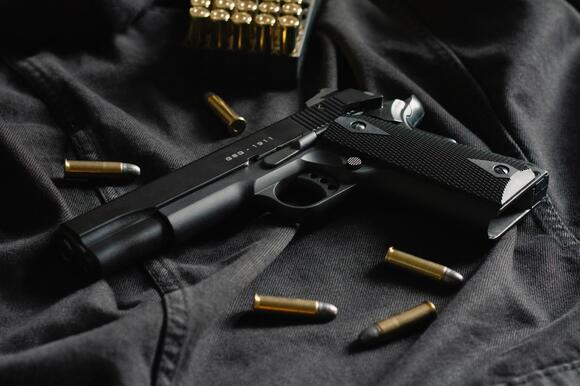 A handgun sits amidst ammunition.Thomas Def on Unsplash.

(Denver, Colo.) A full-time investigator for the Denver District Attorney’s Office reviews handfuls of domestic abuse filings each day. Then, the investigator scours social media and studies provided statements, video footage and other evidence of possible firearms or ammunition at the suspect’s home.

Removing weapons is an extra step to protect victims. Violent offenders often bond out of jail quickly and contact victims despite protective orders.

“What we know is 45% of domestic violence homicides occur within 90 days of separation, and most within the first few days,” Conboy said.

“Domestic violence victims are exponentially more likely to be killed if their abuser has access to guns, and that’s why it is critical to ensure that firearms are removed as soon as the victim seeks help or that protection order is consented.”

Conboy said the Denver DA’s office hoped the program would encourage defendants to relinquish their guns and ammunition.

But the reality is different.

“What we discovered is actually the defense lawyers are interested in working with us because the model is one of harm reduction — we’re not trying to jam up a defendant in court,” she said, explaining that the prosecutors will only use evidence of firearm possession to charge a defendant if they refuse to relinquish the weapon(s).

In 2021, the investigator’s work helped remove 141 weapons from 48 defendants.

In addition to helping prevent violence, the program can prevent accidental deaths and suicides of defendants, Conboy said. Often violent offenders charged with crimes experience mental health issues. The program also may convince defendants to relinquish firearms instead of hiding them.

Denver domestic violence victims can find a one-stop-shop of resources ranging from legal aid to medical help at the Rose Andom Center, 1330 Fox Street. The firearm relinquishment program operates out of the center, and individuals can contact the center with information regarding domestic abusers’ firearm ownership.

DougCo residents can map their wildfire risk through interactive tool

(Douglas County, Colo.) Douglas County residents can learn more about the risk to their properties through an interactive web map launched by the Douglas County Commissioners. The map uses the Wildland-Urban Interface Risk index outlined by the Division of Fire Prevention and Control’s 2022 Wildfire Preparedness Plan. It shows residents how housing density, flame length data and response functions combine to represent potential impacts of a fire due to the surrounding biodiversity.

CDOT urges drivers and passengers to buckle up. (Colorado) According to the Colorado Department of Transportation, in 2021, over a third of Colorado’s traffic fatalities involved unrestrained passengers or drivers.

(Aurora, Colo.) Aurora police began a targeted enforcement on May 1 against street races, hoping to slow down and deter potential racers. Agent Matthew Longshore, a public information officer for the Aurora Police Department, said the enforcement was authorized by City Council in July 2021 through a city ordinance. The ordinance allows law enforcement to identify vehicles used in street races or other crimes and follow-up later. This could potentially involve towing a vehicle, incentivizing owners to make appearances in court.

Pictured is suspect Matthew Buchanan and the vehicle he was last seen driving.Photos provided by the Castle Rock Police. (Castle Rock, Colo.) Police named a suspect in connection to a house fire and what the department is calling a “suspicious” death in Terrain last week. The suspect was previously named a person of interest on April 27.

(John Anderson for Sheriff) (Douglas County, Colo.) John Anderson promises to beef up patrols to protect residents if he’s elected Douglas County Sheriff. Anderson, who also ran for the office in 2014, said the county has kept about 11 road patrol officers on a standard shift since 2006. Between 2006 and 2021, Douglas County’s population grew from 263,621 to 368,990.

(Douglas County, Colo.) Holly Kluth, a 32-year veteran of Douglas County law enforcement, emphasizes her education, experience and knowledge to voters. This is her first run for sheriff, and Kluth said she will emphasize protecting families, students and citizen property if elected.

Thomas calls her DougCo board suspension a 'smear campaign'

From left: George Teal, Lora Thomas, Abe LaydonDouglas County Government. (Douglas County, Colo.) Douglas County Commissioner Lora Thomas said Wednesday that her suspension from her role as chairwoman for the second time in a year — facing allegations that she would "bully, harass and intimidate" political rivals — is “political theater.”

Pictured is person of interest Matthew Buchanan and the suspect vehicle.Photos provided by the Castle Rock Police Department. (Castle Rock, Colo.) Police are seeking a person of interest in connection to a house fire and what the department is calling a “suspicious” death in Terrain on Tuesday.

(Owen Lystrup / Unsplash) (Denver, Colo.) Union Station’s RTD bus and commuter rail concourse is getting between $10-15 million in upgrades, and RTD launched a webpage for citizens to track progress or submit questions.