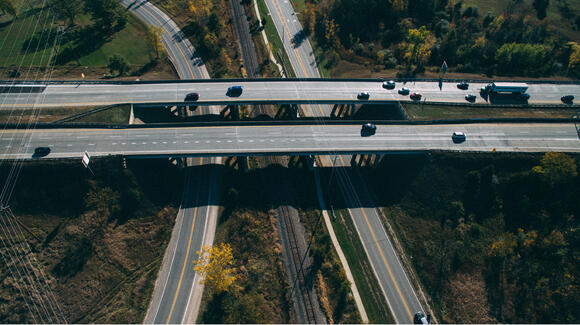 Vehicles travel down a highway.Photo by Chris Bair on Unsplash.

“When pedestrians are present on access-controlled roads, such as highways,” the agency said in a news release, “they are placing themselves and motorists at great risk and can be ticketed, or worse, injured or killed.”

In the three years spanning 2019-2021, CDOT reports Colorado State Patrol troopers investigated 157 crashes involving pedestrians on roads where they were not permitted. Three-quarters of these crashes resulted in a fatality or serious injuries.

Even more crashes were caused by pedestrians between 2020 and 2021.

According to the agency’s data, Douglas County recorded one pedestrian death in 2020, down from two in 2019. Denver County accounted for far more, reporting 15 pedestrian fatalities in 2020 and 16 in 2019. According to the city’s crash data dashboard, there were 381 crashes involving pedestrians in 2021 across the jurisdiction, resulting in 23 fatalities. The city’s crash data does not identify the type of road where the accidents occurred.

“Crossing a highway on foot or walking alongside a road that is not designed for pedestrians is extremely dangerous,” said Sgt. Troy Kessler with the Colorado State Patrol.

A pedestrian was killed on March 23 in Denver while attempting to cross Interstate 25 near Colfax Avenue, according to the Denver Police Department, and two other pedestrians sustained serious injuries in a hit-and-run crash at East 14th and North Logan Street on March 27.

Kessler said drivers don’t expect to see pedestrians on those roads and urged pedestrians to be cautious.

“If you find yourself in the unfortunate circumstance as a pedestrian on a highway, exercise extreme caution, keep alert and distraction free to avoid a worst possible case scenario,” Kessler said. “If you’re the driver, expect everything, pay attention and put away the distraction to avoid hitting someone.”

The counties with the most fatal and injury crashes caused by a pedestrian on inappropriate roads are: Adams County, Jefferson County, El Paso County, Arapahoe County and Boulder County.

If drivers spot someone walking in a hazardous area, the patrol recommends safely pulling off the highway, parking and calling 9-1-1 for assistance.

If your vehicle breaks down, pull off the road, turn on the vehicle’s hazard lights and call for help. If possible, call for help from the vehicle or place yourself on the far side of a guardrail or up a hill.

If you can’t call for help and need to walk, go to the nearest exit or safe location by walking facing traffic close to the road's edge.

CSP Col. Matthew Packard discusses fentanyl seizures on June 1, 2022.(Heather Willard / NewsBreak Denver) (Golden, Colo.) During the first five months of 2022, law enforcement in Colorado seized over 2 million dosage units of fentanyl — more than was seized during 2022 and more than 331% up from 2021, according to data presented June 1 by the Rocky Mountain High Intensity Drug Trafficking Area.

(Douglas County, Colo.) A former Douglas County Sheriff’s deputy is charged with allegedly attempting to bring contraband items into the detention facility where she worked. She also faces allegations of sexual misconduct.