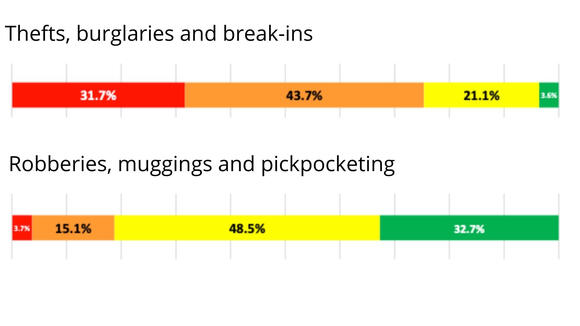 (Douglas Co., Colo.) According to a study issued by the Douglas County Sheriff's office, thefts, burglaries, and break-ins cause the most concern for Douglas County residents.

The study conducted between Jan. 26-Feb.13 this year, gathered insights from 1,453 Douglas County residents on how they view public safety matters.

Over three-quarters, (76%) of respondents cited thefts, burglaries and other crimes of opportunity as a major or moderate crime problem facing the area. Only 3.6% cited this to be “not a problem.”

Conversely, according to the study, robbing, mugging and pickpocketing was the lowest area of concern, with only 3.7% of respondents citing it as a major problem and almost 33% responding that it is not a problem.

In an open-ended question, the survey asked respondents to discuss the number one issue in their community that police could address. Of 1,211 responses, 416 cited thefts, burglaries and break-ins after traffic and roads (457 responses).

“Also consistent with the relevant closed-ended question, thefts and break-ins surfaced as a major concern for residents,” the report stated. “Respondents complained of thefts from homes and cars, and some suggested that the sheriff’s office should run an educational campaign to help residents prevent crimes of opportunity.”

The sheriff’s office tells residents that burglaries are easy to prevent; although they are one of the most common threats to a home. To help prevent burglary, the Sheriff’s Office recommends that residents:

The Douglas County Sheriff’s Office also offers free home security walk-throughs, providing recommendations on how to increase safety in and around a home. To make an appointment, call 303-660-7544.

(Castle Rock, Colo.) National Night Out is an annual event meant to strengthen community-police relations – and this year’s events may have been even more vital to Douglas County law enforcement than in years past given the national trend of officers leaving the profession.

Andrew Condon, 29, of Aurora.Arapahoe County Sheriff’s Office. (Aurora, Colo.) A jury convicted an Aurora man of killing his ex-girlfriend, LaBrea Jackson, in 2018. Andrew Condon, 29, will be sentenced on Nov. 10 in the 18th Judicial District for second-degree murder, tampering with a body, motor vehicle theft, assault, burglary and menacing with a weapon.

(Englewood, Colo.) Douglas County Sheriff’s deputies arrested a man on July 31 for various charges, including possession of fentanyl pills and obstructing a peace officer, stemming from a stolen vehicle report.

(Tingey Injury Law Firm / Unsplash) Heather Willard / NewsBreak Denver / July 28, 2022. (Aurora, Colo.) Antonio Espinosa-Tovar, 29, faces up to 20 years in prison, in addition to possible fines, after a jury convicted him on Wednesday of child abuse and possession of a controlled substance with intent to distribute, both felonies.

Heather Willard / NewsBreak Denver / July 26, 2022. (Castle Rock, Colo.) The trial for a former Castle Rock Department of Water employee is scheduled for early next year when he will face charges of killing his sister and her boyfriend in February this year.

(Parker, Colo.) Residents near Parker can apply for the fall Citizen’s Police Academy, scheduled for 6-9 p.m. Thursdays from Aug. 4 through Nov. 10. Participants will experience Parker Police Department operations and services.