Watch a double celestial event: The last Supermoon of the year and the Perseid meteor showers

August is a time to look up to the skies 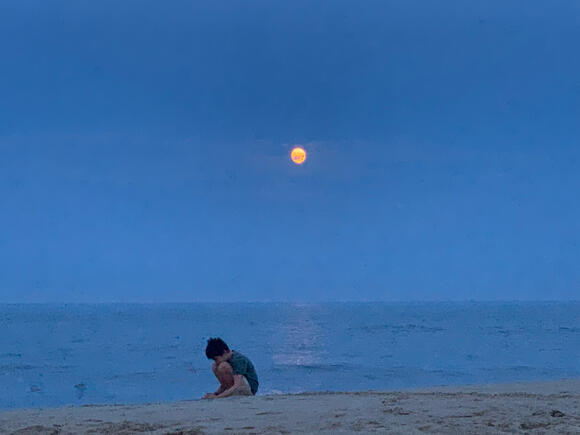 Looking for a fun family activity before the school year starts? Leave the bright lights of the District and head to the darkest skies in Maryland. Or head to the beach far away from the lights on the boardwalk. Go somewhere rural with little light, and you’ll be able to catch both the Supermoon known as the Sturgeon moon and the Perseid meteor showers.

What is the Sturgeon Moon?

While a full moon happens during every lunar cycle, there are peak times when nighttime observers will see the Supermoon. A Supermoon occurs when a full moon is within 24 hours of being at its closest point to Earth in its orbit.

According to NASA, the best time to view the celestial phenomenon is at 9:35pm on Thursday, August 12. According to National History Museum, “Supermoon cast about 30% more light on the planet than when the Moon is at its closest."

So while the lunar light helps bring the Supermoon into better view, it will simultaneously overshadow the other celestial event.

Based on the Maine Farmer's Almanac, the August full moon is named the Sturgeon moon by Algonquin tribes that lived in the northeastern United States. The Moon named after the large fish that are more easily caught that same time of year in the Great Lakes. This year the Sturgeon Moon will be the last Supermoon of 2022.

The Perseid meteor showers are active from July 14 to September 1 this year. However, the peak time to see the Perseids is August 12 to August 13.

In a post by NASA astronomer Bill Cooke while North America generally sees 50 or 60 meteors per hour during an average peak, “…the full Moon will reduce that to 10-20 per hour at best. The Moon is so much brighter than anything else in the night sky, and it will wash out all but the very brightest Perseids as they streak through our atmosphere and burn up far overhead.” Cooke leads the meteoroid Environment Office at NASA’s Marshall Space Flight Center in Huntsville, Alabama.

The peak time to see the Supermoon is August 12. Unfortunately, because of the brightness of the Moon, it will outshine the meteor shower. Lucky for those interested, the meteor shower is a multi-day event with peak times from August 12 through the 13th. So keep watching the night sky, and you might be able to catch a glimpse of them until September.

The Planetary Society recommends timeanddate.com to find the best viewing times and locations in your area.

Checking out the night sky is a fun and inexpensive way to enjoy the last few days of summer. So, where is your favorite place to see the celestial wonders? Let me know in the comments.

The initiative misses the mark, leaving teachers feeling unimpressed and undervalued. Close up of Benjamin Franklin on a hundred dollar billNathan Dumlao/Unsplash. As school systems across the country are dealing with teacher shortages and the mass exodus in education, the Internal Revenue Service has increased the deduction for out-of-pocket classroom expenses for 2022 when they file their federal income tax return.

Teachers skeptical as MCPS relies on a cadre of substitutes to fill vacancies before 2022-2023 school year starts. On August 22, Montgomery County Public Schools (MCPS) will hold its preservice week for teachers. Several schools across the county are looking to fill in gaps left by the inordinate number of retirees and resignations. During the August 8 media briefing, MCPS Superintendent Dr. Monifa B. McKnight shared the steps taken to alleviate the number of vacancies the county still has to fill.