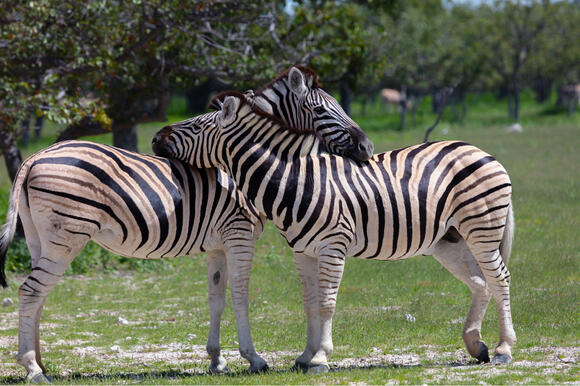 Two zebras intertwining their necks as if to embraceAlan J. Hendry/Unsplash

On August 31st, zebras escaped from a 39-member zeal from a private farm in Upper Marlboro. Prince George’s Animal Control has been working to corral the missing zebras by setting up snack stations around the county in the hopes of enticing the zebras back into captivity.

However, despite the desperate attempts to capture the free-roaming zebras, the dazzle of zebras has eluded capture.

The Prince George’s Animal Control set up feeding stations to entice the zebras back to their home on the corner of Bellefield Road and Duly Station Road in Upper Marlboro. However, when that didn’t work, employees set up an 8-foot tall corral in the area where the zebras have been grazing in Upper Marlboro.

However, the dazzle of zebras has more to worry about than cold weather. While there are no natural predators such as lions, spotted hyenas, Nile Crocodiles, cheetahs, and African wild dogs in the vicinity, someone else may be hunting zebras.

One zebra has been caught in a snare trap not far from the initial sighting on Duley Station Road in Upper Marlboro. Unfortunately, the zebra was found dead. It is unclear if someone set the snare trap to hunt zebras or if the unlucky zebra was the unintended victim. Nonetheless, snare traps are illegal under county and Maryland state law. Natural Resources Police are assisting PG County Animal Control with the situation to find who set the trap and why.

In the meantime, PG County Animal Control is working to capture and return the remaining two zebras still on the run. Until recently, it was reported that five zebras had escaped from the private farm, but the information has been corrected, and it is only three zebras who had run away.

With one dead, there are still two others on the loose. Residents are still cautioned against approaching the zebras. As they are wild animals, Zebras do not like to be cornered and will either bite, kick, or run to get away from danger.

The zebras may have more to worry about than Maryland’s winter season. They may also be facing the possibility of unauthorized persons hunting and capturing them.

What do you think of this turn of events? Let me know your thoughts in the comments.

Carols, cookies, and a visit from Santa and Mrs. Clause bring holiday joy

On Monday, Students and teachers across Maryland began checking their weather apps in the hopes of potential winter weather. In Montgomery County, many began looking at MOCO Snow for the famous “pencil predictions.”

Board member shares concerns about lack of representation in the responses. The Montgomery County Board of Education met on Thursday, December 6, 2022, at Rockville’s Carver Educational Services Center at 12:30 pm. After the Pledge of Allegiance, the meeting began with community comments from MCEA president Jennifer Martin, teachers, parents, and students. Next, the meeting covered the proposal and approval of the 2023-2024 school calendar.