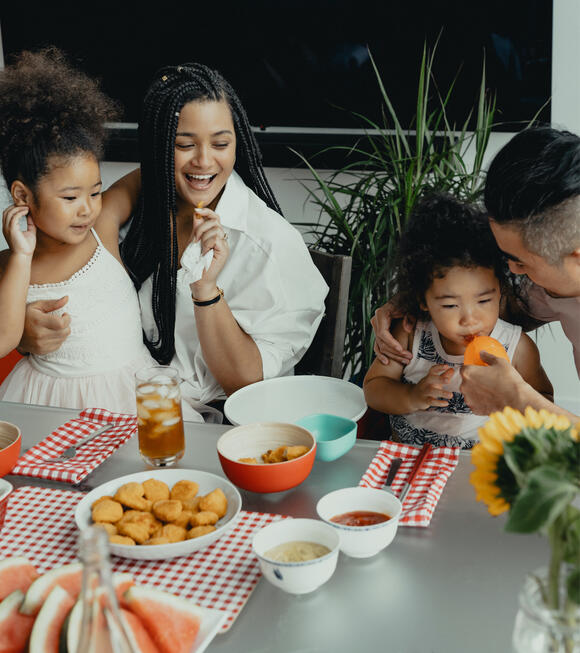 A family of four eating a meal togetherTyson/Unsplash

I get it. With work, school, and after-school activities, there doesn’t seem to be enough time in the day to sit down. Throw in teenagers with high school sports and part-time jobs, and it is all you can do to juggle all the schedules, much less sit down and have dinner together.

While our daily schedules are never the same, family dinners remain constant in our home.

It does not matter if my husband is away on a business trip or my teenager is coming home from cross country practice at 7pm. My kids know that we will sit down together and have dinner. It is our time during the day to catch up with one another. No devices are allowed at the table. It’s just us gathered around the table eating our dinner.

Over the years, I have appreciated this time around the table. However, as the kids grow up and have their activities outside of the family, I know our family dinners and time together are limited.

Put away the screens

One of our unspoken rules for family dinners is that there are no devices at the table. We don’t use our devices, text, or answer phone calls during dinner. Sometimes dinners might be overly short because we need to take a kid to soccer practice, but in that half-hour, we are present.

According to the Psychology Today website, “Research showing that families who sit down together for one meal a day without screen time may be happier or more stable than families who don’t.”

Even when the kids were little, we have always made a point to sit together around the table. My kids know it and expect it. So when sports schedules made dinner time almost an impossibility, we figured it out. Maybe dinner was at 4:30 in the afternoon with a heavy snack before bed, or we broke bread at 7:30 at night, a little later than what we wanted.

Dinner may be the only time during the day when all of you are home and awake simultaneously. Don’t let these moments slip by you.

By having a meal together, you are telling them:

There is a lot to be said over dinner. You can learn so much about your children when they have a safe space to share about their day.

Regular family dinners can be a constant that children can rely upon. Not only that, by spending time with family, teenagers have less time to engage in discouraged behavior.

Psychology Today shares, “Studies have shown that teenagers who regularly eat dinner with their families are less likely to engage in illicit behavior involving drugs and alcohol and more likely to get better grades and be mentally and physically healthy.”

The National Center on Addiction and Substance Abuse did a study that revealed that teens who eat fewer than three family dinners per week are twice as likely to use alcohol and tobacco and one-half times more likely to use marijuana.

The benefits of family dinners

Encouraging our children, especially our teenagers, to participate in family dinners will give them lifelong memories. It might be the one time in their day where they can take a breath before tackling the next activity or assignment.

The National Center on Addiction and Substance Abuse did a study that revealed that teens who eat fewer than three family dinners per week are twice as likely to use alcohol and tobacco and one-half times more likely to use marijuana.

How do you spend your dinner time? Do you agree that family dinners are essential? Let me know in the comments!