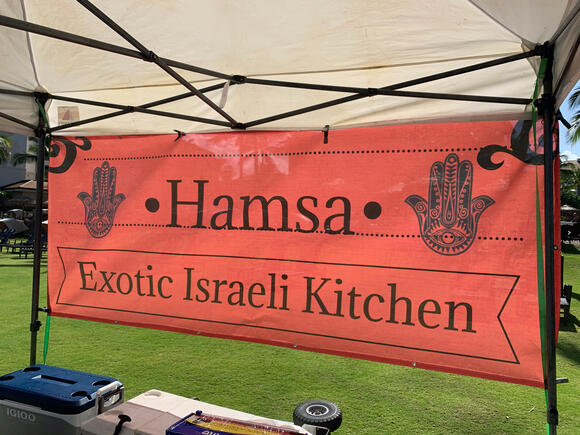 On a long beach walk past Black Rock in Maui, we stumbled upon Hamsa Exotic Israeli Kitchen next to the Westin Resort of Ka’anapli North Beach. Chef Eden Edmisson’s savory dishes enticed us to try a little of everything. She had a variety of hummus and flat-Israel bread. She bakes all of her bread in a traditional flame oven.

The most authentic traditional Israeli cuisine experience on Maui! Let me take you on a voyage filled with colorful spices and flavors delivered to you straight from Israel for a true culinary experience sure to satisfy all your senses!—Chef Eden Edmisson 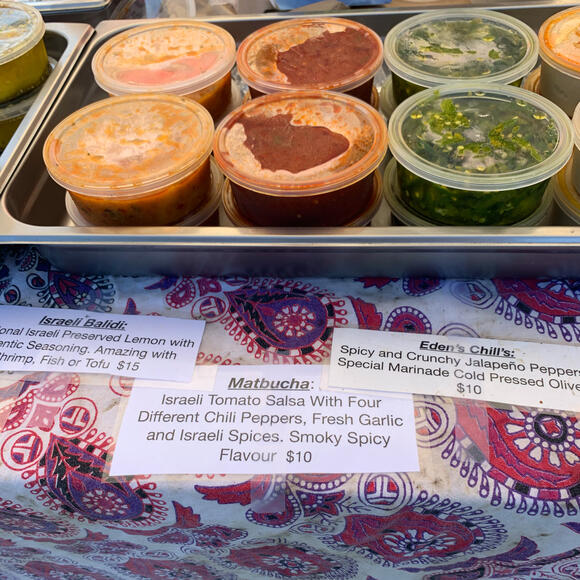 Chef Eden gave visitors a taste of whatever they were interested in trying. I had shied away from anything labeled spicy. But she said to try her Matbucha, a blend of tomato, peppers, chilis, and garlic slow-cooked for six hours. I tried it with a bit of challah bread, and I was surprised by how much I liked it. Chef Eden then said, “I have something to tell you. You like spicy. You don’t like heat, but you like spicy.”

When she told me I liked spicy food, I was in total surprise. But I did love the Matbucha. So we bought both the Matbucha and the traditional Israeli hummus topped with traditional tahini, garbanzo beans, olive oil, and spices. 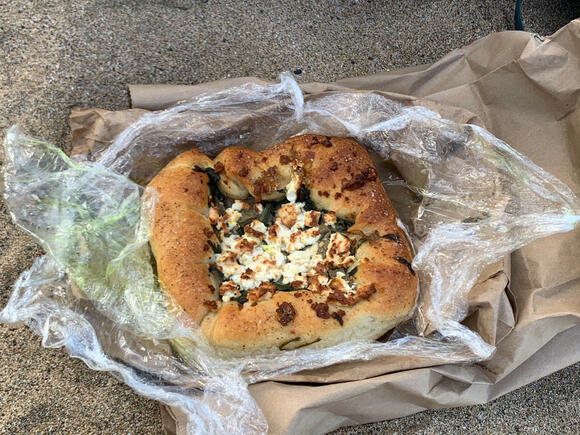 While I liked the Matbucha and the traditional Israeli hummus, the two savory dishes we bought were my absolute favorite. First, chef Eden treated us to a taste of Israeli Style Breakfast (Burikitas): bread stuffed with spinach, caramelized Maui onion, and Israeli feta. We also liked the Shwarma pocket bread, and we were surprised that it is vegan! The Shwarma pocket bread is stuffed with caramelized Maui sweet onion, mushroom, and hawaij. It is advertised that it tastes like chicken, but it’s vegan and so delicious. Though if I had to pick a favorite, it is without a doubt the Burikitas. There is something about the spinach, onion, and feta in a warm bread that makes it a perfect picnic for the beach. 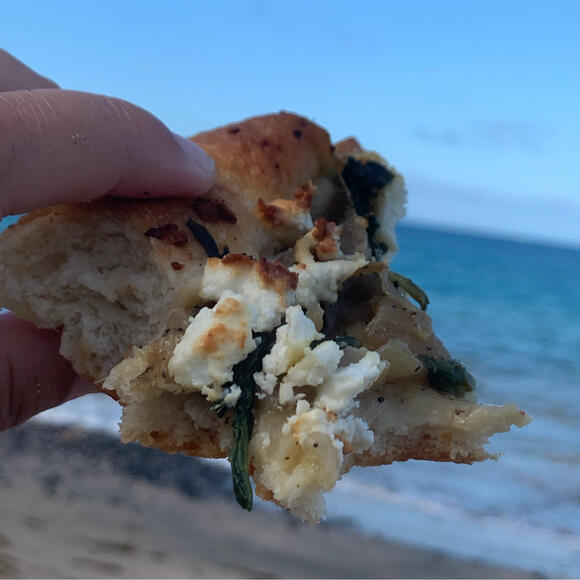 Chef Eden suggested that we heat our bread in the toaster oven before eating. So we decided to make it breakfast for our hike around the island the next day. It made for a perfect picnic as we sat on an isolated stretch of sand just beyond the Hanakao’o Beach Park, watching for turtles with the island Lanai in front of us.

In the “About Me” section of her website Hamsa Chef, Chef Eden shares that she was born and raised in Tel-Aviv. She was exposed to “great restaurants and traditional homemade Israel cuisine” but credits her grandmother’s kitchen as the best of them all. “Her kitchen was my chef schooling for 30 years, so every time I cook, I feel like I’m in Israel again.”

Chef Eden ships all of her spices from Israel and grows some vegetables and herbs used in her recipes right in her garden. Her husband, a fisherman, provides fresh fish for her dishes.

Let me take you on a voyage filled with colorful spices and flavors delivered to you straight from Israel for a true culinary experience sure to satisfy all your senses! —Chef Eden

You can find Chef Eden on Tuesdays and Fridays, 9am to 3pm at Maui’s Finest Crafts Fair at The Westin Kaanapali Ocean Resort Villas on 6 Kai Ala Drive in Lahaina.

Look for her and try her delicious food. Let me know which one is your favorite.