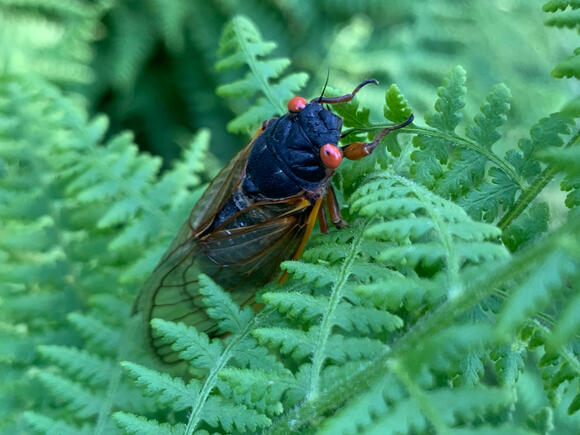 Amidst the eerie sound of pulsing cicada wings outside my window in Montgomery County, there’s a new aspect to the Brood X cicadas that researchers are discovering. They are finding there’s more to cicadas than 17 year protein-packed cuisine shared by University of Maryland Michael Raupp and his students in their book Cicada-Licious. In case you’re wondering, Cicada-Licious provides cicada based recipes for 9 appetizers and main courses and 6 desserts.

There’s more to the cicadas than the rats and snakes they bring out or even the revelation that you might be feeling cicada pee and not rain while you mow your lawn in Montgomery County.

Now, are you ready for this? There is evidence of zombie cicadas. West Virginia University sent out a press release that a team of researchers has found a parasitic fungus that infects the Brood X cicadas. Massapora is a parasitic fungus that gnaws away at a cicada’s genitals, butt, and abdomen wearing them away “like an eraser,” according to Brian Lovett, the study’s co-author and post-doctoral researcher.

Massapora is a fungus that contains chemicals similar to those found in hallucinogenic mushrooms. If you are wondering if you can get high from consuming the psychedelic infused cicadas, Matt Kasson, West Virginia University assistant professor of forest pathology and co-author of the study on Massapora, says he “wouldn’t take that risk.”

While found to be generally not harmful to humans or to be a major pest in any way, it’s probably safe to say that if you see a zombie cicada, you should pass on the opportunity to nosh on the arthropod.

While they are still learning about zombie cicadas, researchers think that cicada nymphs encounter Massapora on their way down to the tree roots. According to Kasson, “The fungus could more or less lay in wait inside its host for the next 17 years until something awakens it.” This year’s brood is the third cicada population to have been discovered to be infected with Massapora.

While the fungus eats away at the cicada, it causes male cicadas to mimic a female’s flicking wings to lure unsuspecting male cicadas and sexually transmit the fungus to healthy cicadas.

We call them flying saltshakers of death, because they basically spread the fungus the way salt would come out of a shaker that's tipped upside down."--Matt Kasson, West Virginia University assistant professor of forest pathology and co-author of the study on Massapora

According to Kasson cicadas can also spread spores by flying around or walking on branches. “We call them flying saltshakers of death, because they basically spread the fungus the way salt would come out of a shaker that’s tipped upside down.”

Kasson clarifies, “They are only zombies in the sense that the fungus is control of their bodies.” The cicadas are unaware that they are infected and carry on, even though the bottom half of their body is gone, infecting healthy cicadas. The fungus manipulates the insects’ behavior, and according to Lovett, “When these pathogens infect cicadas, it's very clear that the pathogen is pulling the behavioral levers of the cicada to cause it to do things which are not in the interest of the cicada but is very much in the interest of the pathogen.”

How do you know you’ve come across a zombie cicada? They have a white to yellowish plug that covers their back end. According to Lovett, the fungus causes the cicadas to lure “others into becoming infected because their healthy counterparts are interested in mating.” Despite all this, zombie cicadas are not known to be harmful to humans.

We are just starting to see cicadas around Gaithersburg, though I saw them everywhere in Catonsville. I can hear them all day and all night with their eerie pulsing hum. But no sign of zombie cicadas in my part of Montgomery County.

What about you have you seen any zombie cicadas? What do you think about this newest find? Drop me a comment and let me know!

Tax-Free Week is coming back in Maryland, just in time for back-to-school savings

Person looking through racks of clothingArtem Beliaikin/Unsplash. Back to school is just around the corner, and schools have distributed their supply lists. For teachers in Montgomery County, the pre-service week begins on August 21, and students return to the classroom on August 29.

MCPS is looking to fill vacancies in 8 critical areas within the school system. Help Wanted sign posted in a windowTim Mossholder/Unsplash. The nation saw a mass exit in every school system at the end of the 2021-2022 school year. Montgomery County Public Schools (MCPS) is no different. As a result, the school system is holding a virtual job information session, an in-person job fair, and a daily open house to find the right individuals to fill the vacancies.