17 Year Cicadas are on their way, how are you going to eat them? 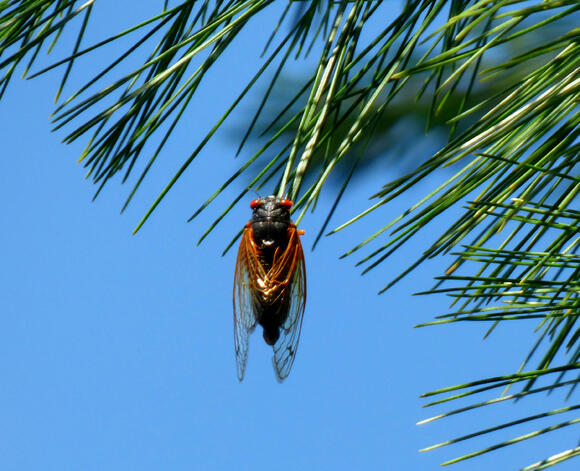 Photo by Laura Gilchrist on Unsplash

They’re coming! Are you ready? The 17 year cicadas are due back between April and June this year. They are called Brood X or Great Eastern Brood. Billions, yes billions of cicadas will grace us with their presence for about six weeks.

They are ready but waiting for the soil to be warm enough. The ideal soil temperature for cicadas is about 64 degrees. For the Mid-Atlantic region, that usually comes by about the third week of May, but it could be sooner. Usually, you have stragglers on either side. --Mass Kasson, West Virginia University Biologist tells New York Times

I remember as a little girl when I first saw a cicada. I was nine years old and just moved to Maryland from California. I remember these huge flying bugs with red eyes and they were everywhere! They were falling out of trees, they were on the ground. Everywhere you went you could hear the constant hum or you were crunching on them as you were walking. Whenever one of us found a molted shell we would put it on each other and laugh hysterically. And the noise! Their mating call was the backdrop to my first spring in Maryland.

My kids are too young to remember cicadas and this year will be a treat as they discover the flying bugs.

In 2007 Filmmaker Samuel Orr began working on an hour long documentary on cicadas and even raised more than $30,000 on kickstarter towards his project. You can get a sneak peek here on Orr's work, "Return of the Cicadas."

Have you ever thought about eating a cicada? Did you know there are Cicada recipes?

I’ve seen these things in real life and I don’t think I’d be tempted to try one, no matter how it’s cooked. But the doctor did just put me on a very low fat-diet for my HER2+ breast cancer and these cicadas are known to be high in protein and low in fat. So maybe?

Entomologist Isa Betancourt told Lancaster Online that they’re called the “shrimp of the land” and a “rare delicacy.” She compares them to other arthropods such as shrimp, lobster, and crabs. And if you’re from Maryland, I’m sure you have had your fair share of steamed crabs and Old Bay.

Entomologist experts say the best time to eat a cicada is when they are undergoing their molting stage. According to Isa Betancourt to Lancaster Online, “That’s when they are their softest.” If you prefer a crunchier snack, you can eat them when their skin has hardened.

Entomologists also recommend that you speak to your doctor about adding cicadas to you diet, especially if you are allergic to shellfish. So before you fire up the pan, check in with your doctor.

University of Maryland Professor Mike Raupp and his students have created cicada cookbook so that you can you try this delicacy. It’s called “Cicada-Licious.” You can also check out Raupp’s blog, The Bug Guy where he talks about the “Bug of the Week” and most recently the arrival of the Brood X cicadas.

Now back to that cookbook, Cicada-Licious. They list 15 recipes: 9 appetizers and main courses and six desserts. Of course they have a Maryland base recipe: Maryland Cicadas. What’s a Maryland recipe without some Old Bay seasoning? With billions of cicadas emerging this year, Mother Nature isn't going to miss the four pounds of cicadas needed for the Maryland recipe.

I will say that I am also intrigued by the El Chirper Tacos. Tacos are my love language.

But I’m not sure that I’m ready to dive into a cicada buffet.

What about you? Would you eat one?

By the numbers: What Wednesday held for students and staff. The numbers from staff absences are reported by anonymously across the county. For the sake of anonymity, no sources are identified.

Parents and teachers demand transparency while MCPS points fingers and lacks consistency. Before students went home for winter break, schools across Montgomery County reminded them to bring home their chrome books, chargers, school books, and other school supplies. This move gave a semblance that Montgomery County Public Schools (MCPS) was looking ahead and ready to make the needed transition to virtual instruction as COVID-19 positivity rates soared across the county.

MCPS receives pushback over decision to remain in-person as positive cases soar across the county. Little girl sitting with head in hand as she works on tabletKelly Sikkema/Unsplash.