When My Mother-in-Love Died on a Leap Year, it Left a Hole in my Heart and Calendar 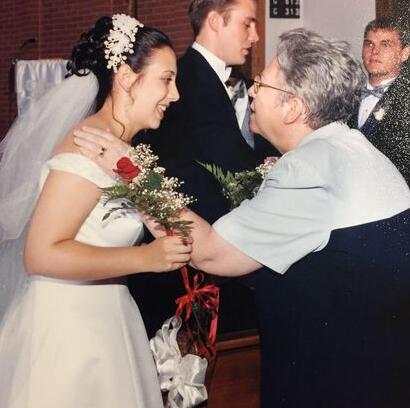 Photo Credit: Gary Law Photography (picture of Author and her Mother-in-Love on her wedding day)

It’s been 5 years since she passed away. I’m not as numb when I think about her. It doesn’t hurt as much. The tears don’t come right away. My daughter has stopped crying every night or needing to sing one of her grandmother’s favorite songs, “Hail Mary, Gentle Woman.”

But this morning took me by surprise when I realized it was already February 28th. The anniversary of her death has been in the back of my mind all month. But today still snuck up on me. Maybe it’s because her death date is really February 29th.

What do you do when you can’t observe the actual day of her death except on a leap year? It’s weird. It feels incomplete. It feels like there’s a hole where she should be. And not having a day that we claim for her makes it hard as if her memory is unattainable; as if she is just a shadow on the edges.

But she wasn’t. She was never on the edges. She was my mother-in-law, but she treated me as a daughter. She shared her love for Diana Gabaldon’s Outlander series with me. She was the first one to come to the hospital when one of her grandchildren were born. Before she died, she met 22 of her 23 grandchildren (not all mine, I gave birth to only four of them). She had a great love for books, mint chip ice cream, and the Church.

I remember when my now husband told her he had met someone (me!) her first question was, “Is she Catholic?” Her faith was so important to her. And no, I wasn’t Catholic. And while I’m sure she prayed for my conversion, she never brought it up or made me feel like I was incomplete or not a part of the family. When I did join the Church, she was there.

When I met Diana Gabaldon, the author of our beloved Outlander series, I had her sign a book for my mother-in-law that I was able to give to her on Mother’s Day. Being a bibliophile my mother-in-law already had all the books in hardcover. When she opened the gift she looked a little confused because she obviously already had the version I gave her. And then I said, “Open the book, Mom.”

Her face lit up because she just knew that I had it signed for her. She returned the favor by giving me her original copy and signing it for me. “For Heather, who loves these books as much as I do.” I treasure that copy. When she died, the one thing I asked for was the copy I had signed for her so I could have a little bit of happiness from that Mother’s Day tucked away on my bookshelf. My father-in-law gave me the rest of her collection and so they sit side by side with my own, half of which she gifted me on my birthdays.

When she died unexpectedly we were devastated. It took a long time before my husband felt comfortable enough to talk about her aloud. My oldest daughter cried for weeks saying she missed Grandma. Even five years later, my youngest who doesn’t have any tangible memories continues to pray for Grandma every night.

I think of her often, but feel her more so during the family Crowning of Mary at my father-in-laws house. She loved the May crowning and even made programs for everyone so we would know the order of the songs and prayers.

Last night as we remembered her we celebrated her memory with mint chip ice cream and watching Star Trek. Every time I open my Kindle I think of how she loved hers and was happy to be able to bring all of her books with her wherever she went. Her books and the characters within were her companions throughout her day. She greeted them like old friends when she reread any of her books.

When I look at my children, I see the legacy she’s left behind. She left her love of reading and books with each of my children, especially my oldest. My oldest daughter has my mother-in-law’s generous spirit. My 10 year old has his grandma’s love for family. Our youngest’s pictures remind me of when my mother-in-law took up coloring the last few years of her life.

The hymn “You are Mine” by David Haas brings me to tears every time I hear it at Mass. It brings me comfort that when she was called Home, Jesus said, “Do not be afraid, I am with you. I have called you…by name. Come and follow me. I will bring you home. I love you and you are mine.”

I miss her terribly, but I know that she is Home. And for a little while, she was ours, too. For that, I am grateful.

Until I see her again, I will celebrate her memory with mint ice cream, Star Trek, and Outlander.

The initiative misses the mark, leaving teachers feeling unimpressed and undervalued. Close up of Benjamin Franklin on a hundred dollar billNathan Dumlao/Unsplash. As school systems across the country are dealing with teacher shortages and the mass exodus in education, the Internal Revenue Service has increased the deduction for out-of-pocket classroom expenses for 2022 when they file their federal income tax return.

Watch a double celestial event: The last Supermoon of the year and the Perseid meteor showers

Full moon at Bethany Beach, DelawareHeather Jauquet/Author. Looking for a fun family activity before the school year starts? Leave the bright lights of the District and head to the darkest skies in Maryland. Or head to the beach far away from the lights on the boardwalk. Go somewhere rural with little light, and you’ll be able to catch both the Supermoon known as the Sturgeon moon and the Perseid meteor showers.

Teachers skeptical as MCPS relies on a cadre of substitutes to fill vacancies before 2022-2023 school year starts. On August 22, Montgomery County Public Schools (MCPS) will hold its preservice week for teachers. Several schools across the county are looking to fill in gaps left by the inordinate number of retirees and resignations. During the August 8 media briefing, MCPS Superintendent Dr. Monifa B. McKnight shared the steps taken to alleviate the number of vacancies the county still has to fill.