Writes about History and Mystery

Was Michael Rockefeller Eaten By Cannibals? 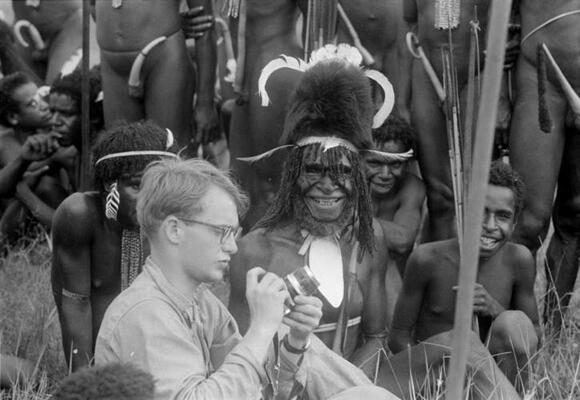 Fed up from the perks of modern life, Michael sought solace in the unconventional lifestyle of the untamed. However, his passion brought about his mysterious downfall.

Despite numerous theories, the question remains: What happened to Michael Rockefeller? Was he eaten by the cannibals whose ways he worshipped? Did he fake his death to join the secluded Asmat tribe? Is Michael still alive?

Who was Michael Rockefeller?

A 23-year-old man named Michael Rockefeller belonged to one of the wealthiest and most influential families in America. He was the son of a businessman and politician.

Michael’s Passion for the Unknown

The Museum of Primitive Art, earlier established by Michael’s father, deeply interested him. This interest turned into a passion as he set out on expeditions to learn about other cultures and dived into exploring the unknown.

His domain of interest was the art of indigenous tribes. Despite having studied economics and history from Harvard University, he wanted to venture on expeditions. Little did he know that his passion would become the cause of his death.

The Unconventional Cannibalism of the Asmat Tribe

On one of his expeditions, he found the Asmat tribe in the Papua province of Indonesia and aimed to bring their cultural artifacts back to New York. He was fascinated by the ways of the tribe and their imposed seclusion from the rest of the world.

Growing up in modern civilization and being a close observer to the lifestyle of the rich wealthy man, this untamed setting was an unusual sight. This exotic element of the unknown intrigued him. The tribe believed that there was no physical entity that existed beyond their territory.

They thought that the world was limited to their tribe and formed their morality. One of the odd practices that they conducted was headhunting or more commonly known as cannibalism.

They devoured every part of the dead body, from the bones that were used to make weapons to the meat for nourishment. They were alien to the concepts of modern civilization. Therefore, they thought that anything unknown entity that appeared in front of them was a spirit.

Thus, the white man entering their territory was a spirit. Therefore, they rationalized that they had to defend themselves from these entities, especially three years before the incident.

The Intervention of White Spirits

At the time of Rockefeller’s disappearance, the land he went missing was where two tribes were fought each other.

The incident occurred in 1958, where the Dutch murdered Asmat leaders in an attempt to retain their control in the region. They executed a military intervention that could not communicate with the tribes. The Asmat tribe, who had previously never seen a white man, stood opposite military weapons and armed men aiming at them.

They perceived them as a threat, and as a result, some of the Asmat leaders lost their lives in combat. This incident had the tribe seeking an opportunity for revenge.

The Last lines of Michael Rockefeller

Rockefeller returned to New Guinea to the Asmat tribe after his first trip. This time, he was successful in acquiring some of the tribe’s artifacts.

However, on his way back with anthropologist Rene and two Asmat teenagers, the boat on the Betsj river overturned. The Asmat boys swam to seek assistance while the other two clung to the boat the entire night. Finally, Michael said to Rene, the last words before he swam 10 miles to the shore to find help were:

“I think I can make it,” (Michael Rockefeller)

Even amid hopelessness, Michael believed that he saw a glimmer of light left. Dutch authorities rescued Rene, but Michael Rockefeller was nowhere to be found on 19th November 1961.

Michael’s family appointed an extensive search for him in the nearby forests. People were sent to search for him but found no traces or remains of Michael.

His family even offered a 250,000 dollar prize for the person who found Michael Rockefeller. His disappearance sparked controversy since the son of an influential man was nowhere to be found, and the family wouldn’t settle for reasoning without evidence.

At the same time, the family was very secretive in their investigation; however, they asked the public to help find their son. The contradiction between their actions is one of the reasons this appeared to be suspicious and even suggested political motives to conceal information. From 1961 until now, the following theories have come to light in terms of his disappearance:

It would be a simple but convincing explanation that he died drowning in his attempt to swim to the shore. The likelihood of his ability to swim 10 miles seems far-fetched.

However, no remains were found nearby or the equipment he was last seen with. The reality is distressing to know that the man who thought he would live never made it to safety.

Another possibility suggests a torturous death for Rockefeller. The author of Savage Harvest, Coff Hoffman, conducted a verification search of events that were concluded about Michael’s death. In his book, he suggested a shocking turn of events.

Since the Asmat tribe were cannibals, he suggested that they consumed Michael when he turned up the shore. He later found a private investigator hired by the Rockefeller family and was given the exact amount promised to the person who found their son.

The investigator visited the tribe and found a skull that a couple of people claimed was Michael’s. The family supposedly accepted these skulls as proof of Michael’s death by the investigator, and the rest was covered up partly by the Dutch government and partly by the family.

Fraser Heston, while directing his documentary following the events of Michael’s disappearance, concluded that there is a possibility that Michael left the conventional lifestyle of the white man and started to adopt the ways of the tribes as he saw a picture where a white man was performing a ritual with the indigenous tribe. However, Heston believed that Michael is still alive and lives with the lifestyle that resonated with him.

The speculations about either claim arose when it was found that the Dutch had motives to keep the information regarding Michael classified and was later verified by the Asmat tribe when the incident was common knowledge to the people. The investigator heard a tribesman telling the story about a white spirit saying,

This remained unsolved with three possible theories that amplified this incident’s mass attention and intrigued a person with mystery. The idea that untimely death can occur through age-old practices like cannibalism unsettles one because the people who supposedly consumed Michael would be the same people who greeted him on his first visit. To be viewed as a material to be consumed is what unsettles one when we learn about indigenous tribes like the Asmat tribe.

Writes about History and Mystery

Why did the Great Ottoman Empire not Colonize America? (Opinion)

The Ottoman Empire was one of the mightiest and longest-lasting empires in history. It ruled over the Middle East, Eastern Europe, and North Africa for more than 600 years until it was declared a republic in the 1900s. It had one of the best armies with the best military power. The colonialism of most parts of the powerful regions made them even stronger. As America was discovered, it was like discovering a new world, full of riches and power. The Ottomans, however, never got that far and never pursued the goal of colonizing America.

Utah Man Beat Wife to Death on Their 18th Anniversary

Marriage is a bond of love shared between two souls, but sometimes that love is replaced by hate, leading to tumultuous endings. A similar case happened with the Manzanares when Kristy Manzanares demanded separation from her husband, Kenneth Manzanares, on their anniversary celebration in 2017. No one expected Kenneth to react outrageously, but he had lost his control and punched his beloved wife to death in a fit of rage. Many invitees believed that the anniversary party was staged and Kristy’s murder was pre-planned. It took nearly three years for Kenneth to accept his crime.

On 1 October 2017, people like you and I planned to enjoy a music festival with their friends and family, oblivious of what was waiting ahead of them. A deadly mass shooting of a continuous eleven minutes took place on the Las Vegas Strip in Nevada, leaving many dead and most injured. The Vegas incident scarred Americans such that no music festival has been held on Route 91 since the horrific 2017 mass shooting incident.

Nowadays there’s a DIY version of every appliance and tool- we never thought a dangerously accessible DIY version of guns could also exist. Ghost guns have become the new terror for American police, especially as gun violence is rising. America has a gun problem, and it is being made infinitely worse through ghost guns.

What is the History of America's Silent President?

As a matter of tabloid scrutiny and criticism, the presidential history of the United States has always received a great deal of attention. However, not every president has had the same graph of history. While many presidents today are known for their fiery remarks, there was once an almost unknown president.

Opinion: Christopher Columbus was No Hero

Columbus Day is one of the most contested American holidays, and for a good reason. It is celebrated as a federal holiday and is meant to rejoice in Christopher Columbus’ arrival on the American coast on October 12, 1492. However, what many forget is that the year marked unforeseen tragedy. What it contains is a gory tale of genocide. American is built on the bodies of Native Americans sacrificed to make room for Caucasians. It does well to dig into the atrocities that Christopher bought with himself in 1492.

The history of the African-Americans is not a happy one. For years, black lives were victimized by racism in different fields of work. In such circumstances, survival was even more challenging if you were a female. Fighting this war of racism and gender inequality, Shirley Chisholm was the first black woman who not only joined the strongest political party but also stood for the neglected rights of the black people.

The Adventures in The Life of America's Youngest President

Theodore Roosevelt Jr., better known as Teddy or T.R, was the 26th and youngest President in the history of the United States. He served his time in the Oval Office from 1901 to 1909, after the unexpected assassination of William McKinley (R-Ohio).

On March 30, 1981, a tragedy struck the United States of America when drifter John Hinckley Jr. attempted to assassinate its 40th President, Ronald Wilson Reagan. Despite the President’s miraculous survival, punitive measures were anticipated against his attacker.